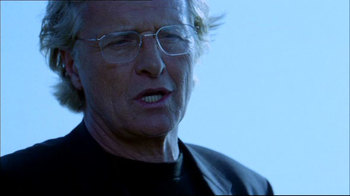 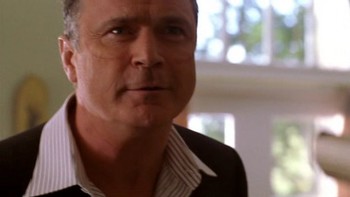 A Metropolis crime boss and childhood friend of Lionel Luthor, Morgan Edge is an antagonist featured in the first half of Season 3, attempting to force Clark (whom he knows as "Kal") to honor a deal he made while under the influence of Red Kryptonite. He and Lionel later try to uncover Clark's secret; in the aftermath, Edge is killed when he drives his car into Clark's invulnerable body. Is revealed to have helped Lionel murder his parents when they were both young. 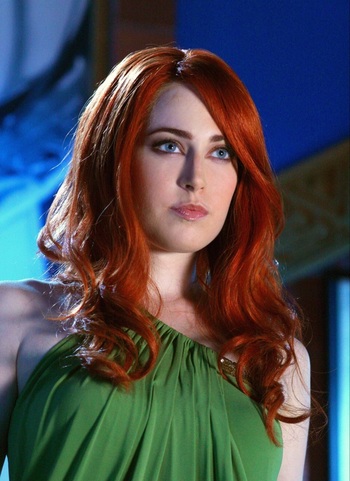 An alien queen from Almerac who arrives on Earth in Season 8 looking for her Kryptonian soulmate. Unfortunately for anyone who isn't a Kryptonian, her kiss is fatal to humans. She kills several men, hospitalizes Jimmy and almost seduces Clark, before he breaks from her control and sends her home. 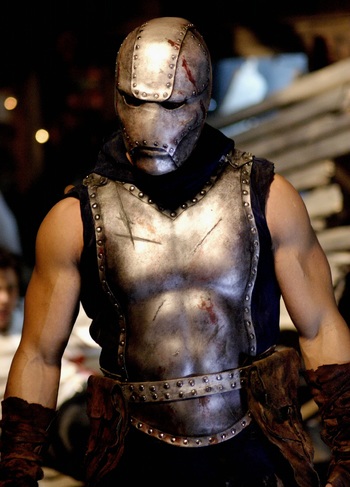 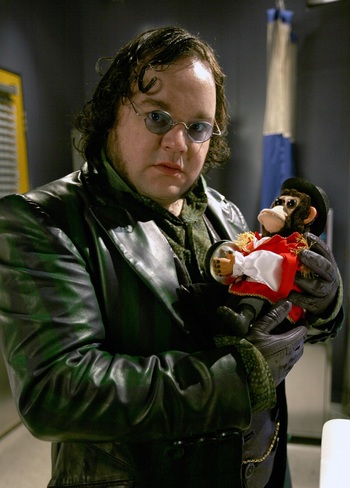 A weapons engineer formerly employed by Queen Industries, Winslow was fired when he cracked under stress and began bringing toys to work... and filling them with explosives. Having reverted at least partially to childhood, Winslow remains a dangerous adversary due to his mechanical genius and disregard for human life. Smart, eccentric and, in a word, nuts.

First appearing in Season 8, he murders most of the LuthorCorp Board of Directors, makes an attempt to kill Oliver Queen, and nearly brings down the Daily Planet with a gigantic kryptonite bomb. He returns in Season 9, once again attempting to get his revenge on Oliver, who had framed him for the murder of his boss, Lex Luthor. Captured and imprisoned at last, he is freed by Tess, who puts him to work repairing Metallo. 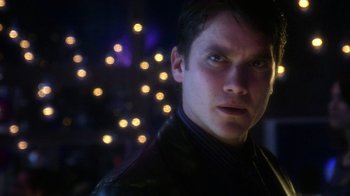 A psychotic gangster who still indulges in the occasional petty robbery, Mannheim carries an intense grudge against Metropolis' vigilante community for making criminal life harder. Beaten by Lois during an attempted mugging, Bruno receives a dressing down from his boss Ron Milano, who has been hoping to go legit. Turning on Milano, Mannheim takes control of the operation as a means of facilitating his personal vendetta against the vigilantes, and Lois' alter ego, Stiletto, in particular. Imprisoned for his crimes, he has not yet reappeared, though he merited a mention in Season 10's "Beacon". 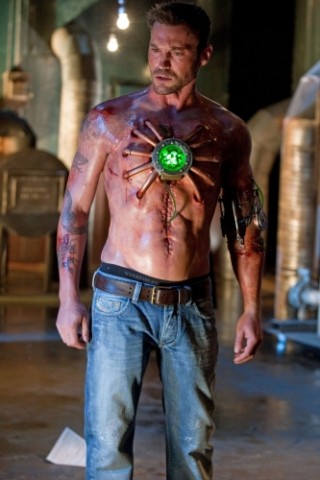 "Control myself? That's easy for you to say. It doesn't take... much to stay in control when you watch from the shadows. You stand apart from the world... while the rest of us live in it. Even when it breaks your heart."

A war correspondent assigned to Afghanistan, John Corben returns to Metropolis early in Season 9, where he is given a desk opposite Lois Lane, to whom he is attracted. Nearly killed in a car accident, Corben is re-built as a Cyborg by Major Zod and the Kandorians. Driven nearly mad by the resultant adrenaline rush, Corben attempts to hunt down and kill the Blur, only to be defeated. He is later re-built by Tess, with an assist from Winslow Schott (see above). Escaping her lab, Corben ultimately assists Chloe and Lois in capturing a Red K-infected Clark and returning him to normal. He leaves at the end of the episode and disappears until he returned as a member of Toyman's Legion of Doom group.

A team of super villains assembled by Toyman to take over Metropolis.
Black Flash
A supernatural creature who's purpose is to collect the souls of speedsters, such as Bart Allen and Jay Garrick, who appears in the Season 11 comics.
Advertisement:
Rose Wilson / Ravager

The daughter of Slade Wilson who appears in Season 11 seeking to continue his crusade against vigilantes and get revenge for his comatose state, choosing to do this by killing the Teen Titans and stopping the next generation of heroes.

The man who murdered Thomas and Martha Wayne, and therefore directly responsible for the existence of Batman. Season 11 showed that he eventually moved to Metropolis and worked with Intergang, helping criminals around the world battle super powered vigilantes.

A rogue cop that only appears for one episode.

Head of the Summerholt Neurological Institute, or at least head of its less ethical projects. He's responsible for the experimentation on Ryan James, and there's every implication that his research on superhuman abilities and other phenomena didn't start there. It certainly didn't end there.

A boy who befriends Lana in Season 3 and begins rooming at the Talon. He is eventually revealed to be a) a spy for Lionel Luthor, and b) to have died several months before and been resurrected by the Lazarus Serum (manufactured from Clark's blood). Cut off by Lionel, Adam is kept alive by Dr. Lia Teng, the doctor who brought him back, and eventually escapes, going on a rampage in an attempt to avoid dying again. It fails, and he succumbs to the effects of his disease.

Fleeing from North Korea and needing a green card marriage to stay in the US, Dr Teng's more concerned about continuing her work than handling the consequences. 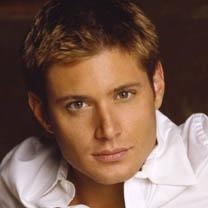 Lana's Season 4 boyfriend, whom she met in Paris, he follows her back to Smallville, where he becomes the new football coach. He has some history with Lex and Lionel, and spends a great deal of time making sure that Lana never meets his mother, Genevieve. Following his mom's outing as the Big Bad, Jason, suffering from major Sanity Slippage, assumes the position of The Dragon, helping her in her game of Xanatos Speed Chess against Lionel, ultimately kidnapping both he and Lex. Jason is shot by Lionel for his trouble and falls off of a waterfall; returning to the Kent farm he takes Martha and Jonathan hostage, only to be killed when a meteor hits the building.

A medieval witch who was burned at the stake by Genevieve Teague's ancestor, the Duchess Gertrude, Isobel swore vengeance against Gertrude's entire line. She possesses Lana several times over the course of Season 4 in an attempt at stealing the Stones of Power and killing Genevieve. 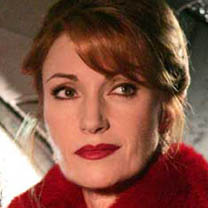 Jason's mother, Genevieve is descended from the aristocracy and isn't afraid to let you know it. She bails Lionel out of jail partway through Season 4 in an attempt at enlisting him in her crusade to find the Stones of Power. When Lionel turns on her, she uses her son Jason, as a pawn in her scheme to destroy Lionel, Lex, and the Countess Isobel Thoreaux. The Man Behind the Man to most of the fourth season, she never meets Clark and is killed in the finale by Isobel. 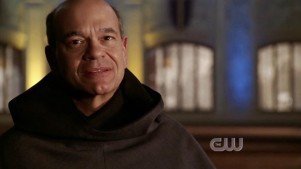 "Veritas... It's the greatest secret the world will ever know."

The ex-husband of Genevieve Teague, he went into hiding and became a priest. 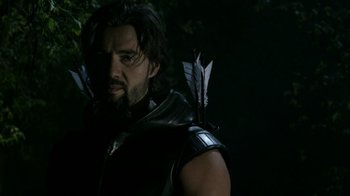 A member of the Brotherhood of Scion, Vordigan is the one who trained Oliver Queen with the intent that Oliver would take his place in the Brotherhood. However years after Oliver left Vordigan tracked him down to fulfil the codes of the Brotherhood, where he was defeated and imprisoned with help from Clark. However Vordigan would escape and join Marionette Ventures.

Appearing in the Season 11 comic he is an alternate version of Bruce Wayne/Batman from Earth-13, who instead of being a hero became a violent criminal and also murdered his world's version of Clark Kent after he discovered his identity. After travelling to Earth-167 he was defeated and imprisoned by his counterpart.
The Monitors
A species from an alternate dimension that wish to destroy the multiverse to maintain order and cause a Crisis as they destroy as many universes as they can.