The beings of the fiery planet Apokolips. In the comics, they are known as the New Gods, though they aren't referred to as such in this universe. 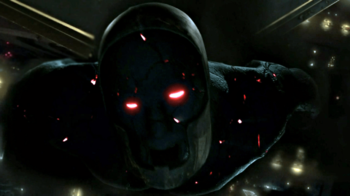 "You so-called heroes are false gods, all of you... and when people stop believing in you, you'll shatter like glass."

Also referred to as "The Darkness" and "Our Dark Lord" (by his minions), Darkseid was unleashed when Clark used the Book of Rao to banish Major Zod and the Kandorians from Earth. Briefly spotted forming out of ravens and smoke at the end of the Season 10 premiere, he later body-jacks Gordon Godfrey, using him to spread a message of hatred and fear against vigilantes over the airwaves. Driven out of his host due to Kara's interference, Darkseid is later referenced by his agents Desaad, Granny Goodness and the newly-appointed Godfrey at the end of "Abandoned" before appearing, almost fully formed, to Earth-2 Lionel at the end of "Scion."

Without a host body, Darkseid remained a dreaded figure within Smallville's tenth season. He was said to be the Ultimate Evil that Jor-El warned Clark about, and was making plans to bring the Justice League and, eventually, the world, to its knees.

In the Grand Finale, Darkseid appears to Earth-2 Lionel as he lays dying of a gunshot wound, and Lionel makes a deal with the Dark Lord to resurrect Lex; Darkseid rips out Lionel's heart and puts it into Lex's new cloned body. Later, Darkseid confronts Clark, possessing Lionel's corpse. He attempts to destroy Clark, but Clark masters his power of flight and flies right through Darkseid, destroying his vessel. 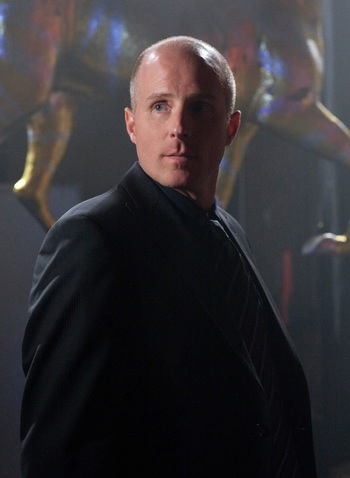 "If I can plant an idea, a seed of doubt within people, it will grow until it devours their faith in each other and in these heroes."

A right-wing DJ with an anti-immigration and anti-vigilante stance, Godfrey is possessed by Darkseid in Season 10's "Supergirl." Under Darkseid's control, he begins attracting a vastly-expanded audience and publishes a book purported to be an exposé on vigilante activity. He also kidnaps Lois and uses her as bait to draw in Clark. Defeated by Clark and Kara, Godfrey is freed from Darkseid's control.

In "Abandoned," it is revealed that Darkseid isn't done with Godfrey yet, though, with Desaad introducing him to Granny Goodness as the third member of their "Unholy Trinity." His task, according to Desaad, is to break humanity's spirit, forcing them away from their saviors and into the dark. 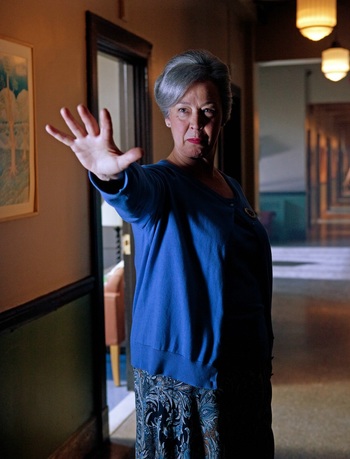 "Life is so much easier without a painful past."

An old woman who runs an orphanage for girls, Granny Goodness is far more than she appears. She first shows up in the Season 9 finale where she saves Tess from death by delivering her to Cadmus Labs. She later re-appears in Season 10's "Abandoned," where the full truth about her is unveiled: She is one of Darkseid's agents, tasked with recruiting soldiers for Darkseid. Indoctrinating the girls from a young age, Granny mind-wipes them, then raises them to be Tykebombs totally loyal to herself with no respect for human life.

Sweet and sugary on the outside, but with a ramrod spine, Granny is devoted to Darkseid's mission to Take Over the World, and her considerable psychic gifts make her uniquely suited to help him accomplish it. 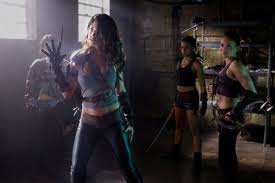 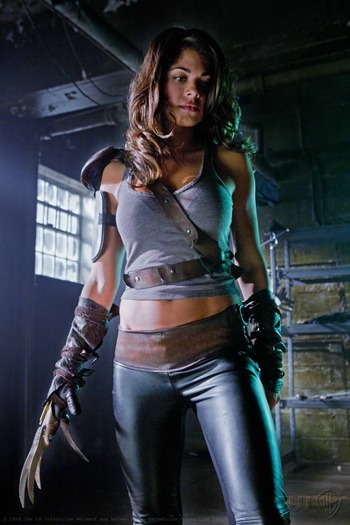 A group of girls raised by Granny Goodness to become Darkseid's fighting elite. They are led by Harriet, a psychotic girl with Wolverine Claws and a fondness for cutting people up. In "Abandoned," they manage to capture Clark, although he quickly escapes from them. 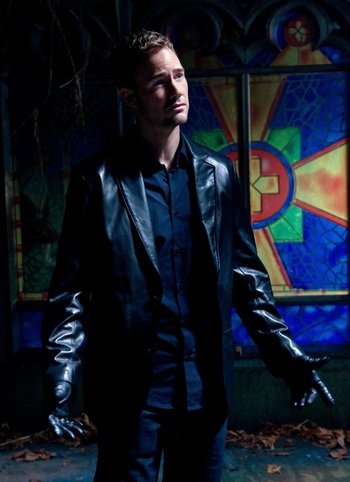 "When was the last time you had a nice hard cry?"

The third member of Darkseid's "Unholy Trinity," Desaad maintains a series of eponymously-titled Fetish clubs. Sleazy and obsequious, he has stated that his task is to "bind their [humanity's] bodies," while Godfrey and Granny attack their spirits and minds respectively. Beneath Club Desaad, he maintains a series of torture cells in which he imprisons, breaks and then corrupts his victims, who range from club-goers to undercover FBI agents. Devoted to Darkseid body and soul, he may well be the most powerful of the Ultimate Evil's minions, and acts as first among equals.

First appearing at a meeting with Granny and Godfrey near the end of "Abandoned," Desaad re-appears in "Masquerade" as the target of a Serial Killer hunt that Clark and Lois are participating in. Unbeknownst to them, Chloe and Oliver are also investigating Club Desaad, which leads to the former being captured and tortured by Desaad. Though Clark ultimately saves her, Desaad has the last laugh,branding Oliver with the Omega symbol, before allowing himself to be captured. He later frees himself and is the one who presents Oliver with the Gold K ring he will use against Clark.