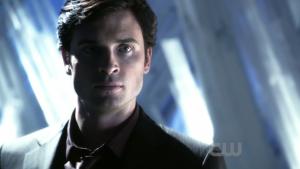 "This world won't know what hit it."

Earth-2's Kal-El, who was found by Lionel Luthor rather than the Kents. Raised by a Social Darwinist father, he's a cold-blooded sociopath who can't keep it in his pants and commits murder as a matter of course. He briefly escapes to Earth-167, where Tess, Oliver and Lois fight him to a draw; he is then transported back. 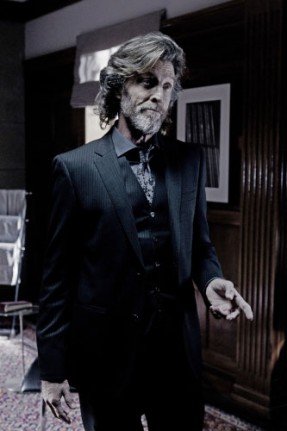 "I am your father and I alone raised you in my own image to become the man that you are today."

Exactly What It Says on the Tin. He's Earth-2's Lionel, who found baby Kal-El and raised him as his own alongside Lex and Tess. Having murdered all the other members of Veritas, Lionel went on to fuse LuthorCorp with the Metropolis underworld, gaining control of the city and possibly the entire planet. An ice-cold Social Darwinist, he has raised each of his children to be a Bastard Understudy, training them to plot against one another and himself.

First encountered by Clark during his trip to Earth-2 in Season 10's "Luthor," Earth-2 Lionel's acquisition of ultimate power is revealed to have made him far more evil than his Earth-167 counterpart ever dreamed of being. After trying and failing to murder Earth-167 Clark, he escaped to Earth-167, where he impersonated the original Lionel, seized control of LuthorCorp from Tess and Oliver, and resumed his search for an heir, sparking a war between himself on the one hand, and Tess and Clark on the other for control of Lex's clone Lx-15. Initially, Earth-2 Lionel appears to have the upper hand but Clark ultimately wins out, with Lx-15 adopting the identity of "Conner Kent" instead of "Alexander Luthor."

Driven from power following this fiasco, Earth-2 Lionel flees to Lex's grave where he encounters Darkseid and rejects a deal to resurrect Lex. In the series finale, he later kidnaps Tess and tries to extract her heart to power Lx-0, a perfect clone of Lex. Tess escapes and shoots Earth-2 Lionel, who uses his last breath to accept Darkseid's deal, giving up his own heart and soul to resurrect the real Lex, and becoming Darkseid's vessel. When Darkseid is defeated, Earth-2 Lionel's body dies.

Earth-2's Tess, who was adopted into the family instead of being abandoned. Very much The Unfavorite, she is even more screwed up than the real Tess.

The Earth-2 version of Lex Luthor, who was killed by his adopted brother Clark though not before branding him with gold kryptonite.

Earth-2's Oliver Queen, he's a dark-haired duplicate of our Oliver who, thanks to serious self-confidence problems, was never able to become a Superhero. He still tries his best, gathering Kryptonite to kill Ultraman with, and opposing Earth-2 Lionel as best he can. When Clark Kent arrives on Earth-2, he and Oliver get off to a bad start, but eventually reconcile to defeat Lionel and Clark Luthor, giving Oliver the chance to be the hero he's always wanted to be. He is engaged to his Earth's Lois Lane.

The Earth-2 version of Lois Lane who is married to Oliver Queen.

The Earth-2 version of Jonathan who has become bitter and angry due to Oliver Queen buying his land and Martha leaving him.

Advertisement:
Earth- 2 Chloe Sullivan
Appearing in the Season 11 comics, she travels to Earth-167 and meets Oliver and her doppleganger before dying. Her memories reveal that Earth-2 was destroyed by the Monitors and had been hoping that Clark Kent could stop them.