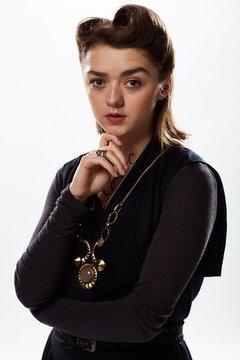 Played by: Maisie Williams (2015)
"I call myself 'Me'. All the other names I chose died with whoever knew me. 'Me' is who I am now. No one's mother, daughter, wife. My own companion — singular, unattached, alone."

A central character in the Series 9 Story Arc, Ashildr was a brave young Viking girl whose village was attacked by the Mire (aliens) in the 9th century. The Doctor saved her village at the accidental cost of her life. In his grief, he rashly defied the fates by using Mire medical technology to resurrect her — which turned out to make her "functionally immortal" (basically really hard to kill). Realizing the danger of this, he takes a "professional interest" in her, following her progress as centuries on The Slow Path pass. Unfortunately, while the Mire tech repairs her body, her mind is the same as any other human, leading to an infinite lifespan with a finite memory. Thus her personality evolves significantly over the Doctor's actual encounters with her: In the 17th century she's "Lady Me", a noblewoman moonlighting as a highwayman called "The Knightmare" and resenting the Doctor for trapping her in life and just moving on. But thanks in part to his compassion and concern, Lady Me subsequently decides to seek out others who have encountered the Doctor and help them after he's moved on. By 2015, she's become "Mayor Me", the woman in charge of a "trap street" — a hidden street in London inhabited by aliens in disguise. When she makes a deal with the Time Lords to capture him in exchange for protection of the street, the plot goes horrifically awry, resulting in Clara Oswald's death. Now the man who saved her and believed in her inherent goodness may hold a grudge against her for the rest of eternity due to the death of the woman he loved.