There are spoilers ahead. You Have Been Warned.

"The World's Strongest" as well as Hajime's Unwanted Harem, they travel across the world looking to conquer the Great Labyrinths; Hajime in the hopes of finding the magic to send him back home, the girls mainly to get into Hajime's pants.
In General
Advertisement:
Hajime Nagumo
Voiced by: Toshinari Fukamachi (Japanese), Matt Shipman (English) 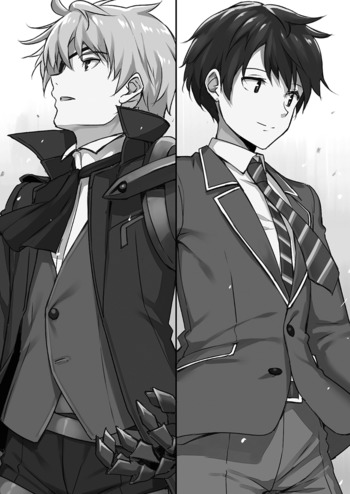 The main character, a stereotypical nice guy, who's an otaku and bully victim, his story begins with a slew of bad luck: taken along with his class to a different world by some gods, given a crappy job and crappy stats, falling down to the depths of the Abyss under dubious circumstances, and mentally broken to the point where he decides survival and return are all that matters. Becoming ruthless and incredibly powerful by surviving the Orcus Dungeon, as well as encountering a vampire girl who becomes his companion, he quickly gave up all thoughts of revenge in search of a way back home after realizing the truth from the abyss he was trapped in, and will mercilessly deal with anyone or anything that opposes him or his companions in this endeavor. Cares for all of his companions, but loves only Yue. Though, he eventually opens up to the others, starting with Shea.

Specialized in Transmuting his environment, he uses a collection of guns he crafted using fantasy ores and components. He also gained the ability to gain the skills of any monster he eats. 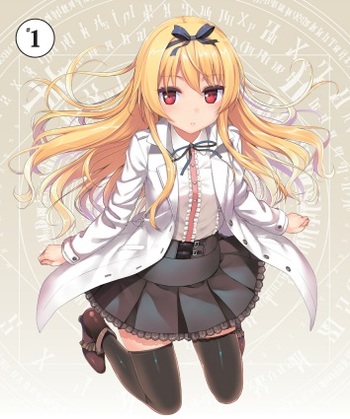 A vampire princess who was betrayed (Actually deceived) by her family for fear of her power (indeed). Kept imprisoned away in the depths of the Orcus Dungeon, her powers kept her alive for over 300 years until Hajime rescued her and promised to take her along. She is in love with Hajime and mostly the only one whose feelings are reciprocated. Not as strong as Hajime, but she can use all types of magic, she doesn't need to chant and can combine them. 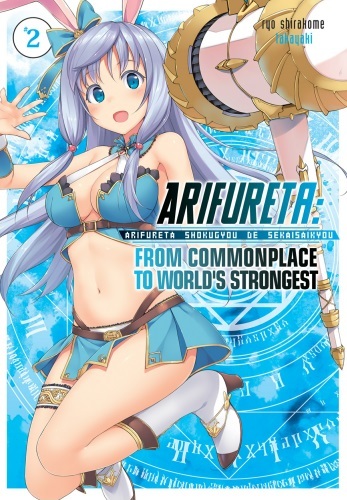 A Cursed Child of the Rabbit people, she has the ability to see the future. Originally hidden away for her white hair and precognitive ability, for petty reasons she used her power and exposed her existence to the other demi-humans. This resulted in her and her whole tribe being banished from the Sea of Trees, making them essentially marked for death until a "chance" encounter with Hajime and Yue. decided to be their companion in her own whims, she barely manages to join the two of them on their journey.

She is physically gifted naturally, but training grossly enhances her strength and magic, which can in turn be into physical reinforcements. She uses a sledge hammer in battle to deal massive damage.

She is the second girl Hajime gets romantically involved with, with Yue's consent. 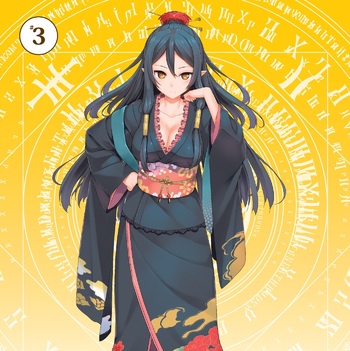 Member of the secretive dragonmen race, was on a mission to gather information about Hajime and his class but fell asleep and was mind controlled by an evil magician, during the battle with Hajime she learned about her S&M predisposition, turned into a masochist and calls Hajime her Master. Her human form's strong, compared to even the heroes, her dragon form surpasses them at least a couple times. 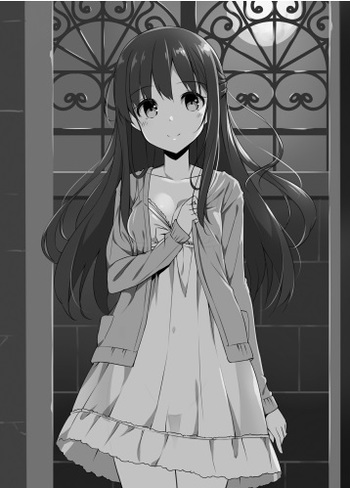 Hajime-kun, I had a dream...
One of Hajime's classmates and the most popular girl in school, admired by many but with eyes only for Hajime. Devotes herself to finding Hajime and reuniting with him after the otaku's fall into the Orcus labyrinth, holding to a dim hope that he may still be alive. She's a user of healing magic, and later gains a pair of greatswords as well as disintegration magic.
Advertisement:

Hajime's former classmates so-called due to the de-facto leader's, Amanogawa Kouki, having the status of Hero whose purpose is to save mankind from the threat of the Demons. Following Hajime's fall to the Abyss, the class ended up splintered into multiple groups, with Kouki leading a 3 party expedition team through the Great Orcus Labyrinth to train for the upcoming war while Sonobe founded the Ai-chan defense force in order to protect their teacher and find a purpose for the lives that Hajime saved.
In General

The backbone of the Hero Party expedition led by the Hero Kouki Amanogawa himself. Kaori Shirasaki and Eri Nakamura used to be members of this party until they left in favor of joining Hajime and the Demon race respectively. They, later on, join Hajime's adventure to clear the remaining 2 Labyrinths following the demon attack on Heileigh and Eri's betrayal.
Kouki Amanogawa
Voiced by: Tetsuya Kakihara (Japanese), Ricco Fajardo (English) 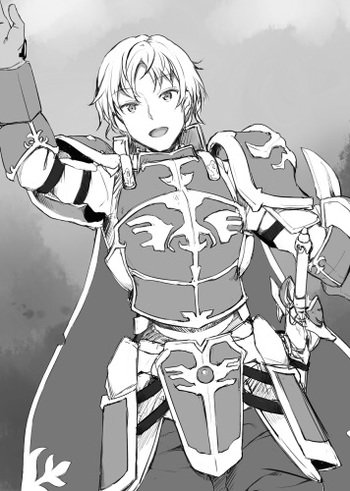 He only thinks he's the epitome of justice.
The "perfect man" of the class.
Shizuku Yaegashi
Voiced by: Yumiri Hanamori (Japanese), Kate Bristol (English) 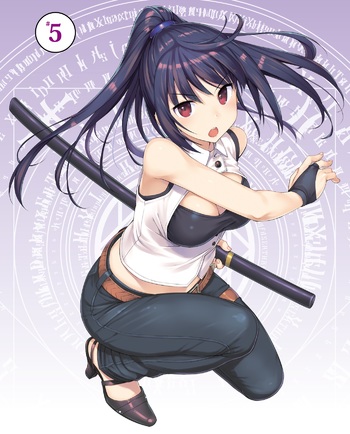 The team's mom.
Shirasaki's best friend, and a kendo champion. She's both the only girl and the only one marginally nice to Hajime.
Ryoutarou Sakagami
Voiced by: Ryuichi Kijima (Japanese), Aaron Campbell (English)
Of the top trio of the "cool kids," he doesn't bother to hide his distaste for Hajime and does his best to drive Hajime out of Shirasaki's life.
Advertisement:
Suzu Taniguchi
Voiced by: Ayasa Itou (Japanese), Dani Chambers (English)
A chibi with inexhaustible energy and spunk.

A group of bullies torments Hajime back in Japan and form a separate party that works in tandem with Kouki's "Hero" party.
Daisuke Hiyama
Voiced by: Minoru Shiraishi (Japanese), Orion Pitts (English)
One of the "cool kids." While not in the top three who harass Hajime, he is the most dangerous, due to his own sense of entitlement to Shirasaki and his own stupidity. He is also the one Hajime rightly hates the most.
Yoshiki Saito, Reiichi Kondo, and Shinji Nakano
The trio of worst offenders. Together with Hiyama Daisuke, they strive to make Hajime's life hell back on Earth and do their damnedest in Tortus as well.

A group of demoralized students who decide to form their own party focused on using their talents and game-breaking skills to defend their chibi-sized teacher Aiko Hatayama rather than risking their lives contributing to humanity's war against the demons.
Aiko Hatayama
Voiced by: Ai Kakuma (Japanese), Emily Fajardo (English) 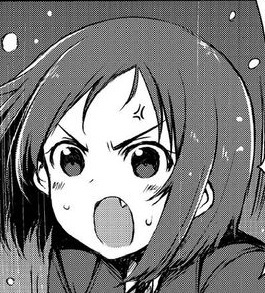 Fight on, Ai-chan!
The social studies teacher who was handling the class at the time everyone was summoned to another world.
Yuka Sonobe
The girl Pre-orcus Hajime saved, first- hand, before his "fall" into the Abyss.
Yukitoshi Shimizu
Introduced in Volume 2, but named in Volume 3, he showcases what could go wrong if an Otaku who fantasizes about being whisked away to another world actually is.
Atsushi Tamai 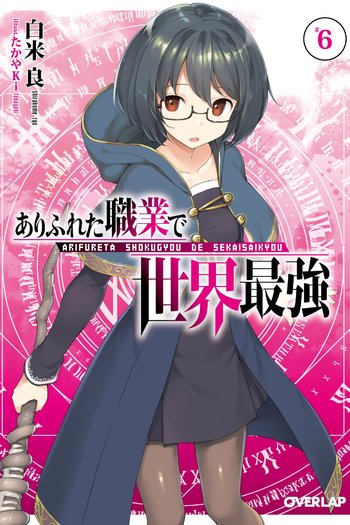 A bespectacled beauty, giving off the air of the stereotypical librarian.

Kousuke Endou
A member of Nagayama's party with a very weak presence and can't be noticed by labyrinth monsters or automatic doors.
Jugo Nagayama
An old friend and classmate of Kousuke Endou and Kentarou Nomura. He leads his own party.
Kentarou Nomura

An old friend and classmate of Kousuke Endou and Jugo Nagayama. He secretly holds feelings for Ayako Tsuji.

The religion of Mankind who worships the god Ehitorujue and responsible for introducing Hajime's class to the Tortus, not to mention some of the more wide-scale issues.
Ishtar Langbard
Voiced by: Shouto Kashii (Japanese) 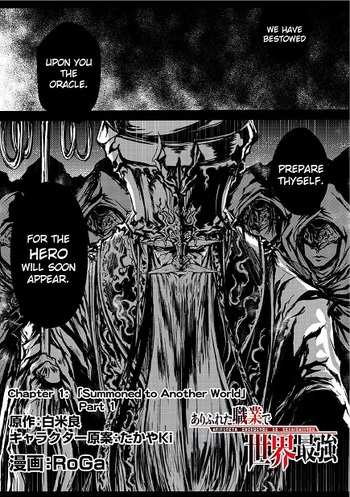 Behold the pope of Eht!
The Pope of Eht (Ehit), and the one who explains the reason why Hajime's class was summoned to Tortus.
Simon L.G. Levellair
An exiled bishop of Ehit introduced in the epilogue of volume 7, along with his granddaughter.
Sybil L.G. Levallair
Simon's granddaughter.

Knight Commander Meld Loggins
Voiced by: Yasuhiro Mamiya (Japanese), Patrick Seitz (English)
The knight in charge of training Hajime's class to be the "heroes" who save the world of Tortus.
Princess Liliana S. B. Heiligh
Voiced by: Noriko Shibasaki (Japanese)

Daughter of King Eric and Queen Luaria and big sister of Randell, she shows quite the insight for her age and is proactive about her kingdom's needs.

King Eric S. B. Heiligh, Queen Luaria, Prince Randell
The royalty introduced in the opening of the light novel, greeting Hajime's class as the coming "heroes."

Emperor Gahard Hoeschle
The ruler of the Hoeschle mercenary empire. He has serious doubts about Kouki's effectiveness as "Hero."
Prince Baius Hoeschle
The first born of Emperor Gahard Hoeschle.
The Imperial Soldiers, and "Boss"
A company of soldiers encountered by Hajime and the remnants of the Haulia tribe after emerging from Reisen Gorge.
Grid Half
The Imperial Soldier who lead the slaver soldiers who captured, raped, and killed many Haulia before Shea could find Hajime.

Cam
Shea's father and leader of the Haulia clan, what's left of it.
Jin
Former leader of the Bear-clan. He does not take the arrival of Hajime and the Haulia tribe well. In fact, he is one of those who utterly brutalize the Haulia while Hajime is trying to negotiate a visit to the Great Tree. Big Mistake.
Regin
Jin's successor. He stages an ambush at the "Great Tree" to avenge Jin's defeat. He would live to regret it. His men don't.
The Tiger Captain of the Guard
The first demi-human encountered by Hajime upon entering the Sea of Trees.
Ulfric Heipyst
An elf, and the first elder to meet with Hajime in the Sea of Trees forest.
Altina Heipyst
Grandaughter of Ulfric Heipyst, effectively the princess of elves.
Zal
The leader of the Tiger Clan.
Myu
Voiced by: Yui Ogura (Japanese)
A a young Merman girl from Erisen who got kidnapped to be sold as a slave, but was saved by Hajime and Shea while they came across her in Fuhren.
Remia
Myu's mother. 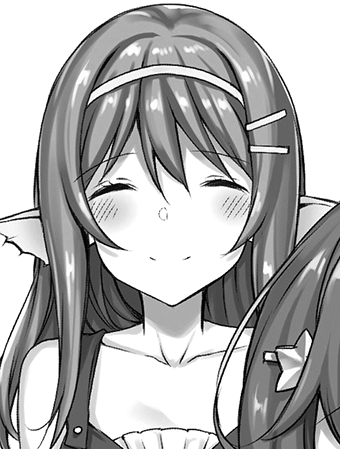 The race with whom Humanity is at war. They recently upset the war's balance with the capacity to acquire unknown and very powerful monsters.
Freid Baghur
The Demon encountered by Hajime in the volcanic dungeon.
Cattleya
The demon tasked by Freid to clear the Orcus Labyrinth, she also intended to recruit Kouki's party.
Mikhail
Cattleya's lover.
Davros
The demon tasked with conquering Verbegen's "true labyrinth."

The deity that the Demon Kingdom worships and wishes for the destruction/enslavement of the Human Race.
Uralt

The original goddess of Tortus who was tasked in protecting the World Tree prior to Ehit's takeover.