The titular Seven Deadly Sins and the main accompanying characters who travel with and aid them.

The Seven Deadly Sins were the strongest and cruelest order of knights in all of Britannia, formed by seven brutal criminals, who had all been convicted for grievous crimes and had carved the symbols of seven beasts onto their bodies. After having been framed for murdering the Great Holy Knight, they were disbanded. The Sins were later branded as traitors and villains.

Tropes pertaining to the Sins in general
Meliodas

Meliodas is the leader of the Seven Deadly Sins and is known as the Dragon's Sin of Wrath. 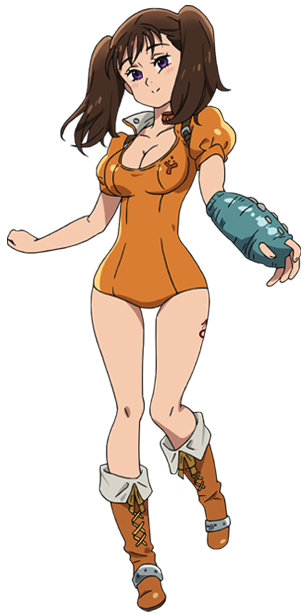 About 700 years ago before the start of the story, Diane left her home of Megadozer and rescued King. For the next 500 years, they spent their lives together and fell in love with one another. Due to circumstances involving King however, he had to erase her memories and leave her. None the wiser, she returned back to her people to be trained under a fellow giantess Matrona. Later about 16 years before the start of the story, Diane met and fell in love in Meliodas, not realizing she was unintentionally misdirecting her true feelings. She then was involved in a plot by some vile Liones knights who intended to kill her and Matrona for glory. Although she survived the incident, Diane was made into a scapegoat for the massacre that had happened. Meliodas fortunately intervened at her trial and recruited her into the Sins.

After the incident wherein the Sins were framed, Diane went into hiding in the Forest of White Dreams, forcing the resident Prankster Imps to aid her. When Meliodas and company came to the forest, she immediately rejoined the Sins.

Ban is a member of the Seven Deadly Sins, the Fox's Sin of Greed.

In the past, Ban was a bandit who went by the moniker "Bandit Ban". He sought out the Fountain of Youth in the Fairy King's forest in order to gain immortality in the hopes of living long enough for something good to actually happen to him. Instead, he met with the fountain's guardian Elaine and over the course of seven days, they both developed deep feelings for one another. However in the midst of it all, a Demon attacked the forest and deeply wounded both Ban and Elaine. In a sheer act of sacrifice, Ban was saved by Elaine when she gave him a drink from the fountain instead of saving herself. Having become immortal, Ban took care of the Demon but the damage to the forest was done and Elaine lost her life. For what happened, Ban was accused of the crime for which he didn't defend himself against.

Later, Ban was personally recruited by Meliodas to join the Seven Deadly Sins. As Meliodas was the second person after Elaine to truly acknowledge him, Ban joined the order. After the Sins were framed, he let himself be captured and imprisoned in Baste Dungeon, only to escape years later when he discovered that Meliodas was still alive.

While Ban didn't defend himself for the crime that he was accused of, he however at some point in time actually revived the forest by planting the seed entrusted to him by Elaine before her death. For this, he was deemed the new Fairy King by the Sacred Tree and accepted as such by most of its inhabitants much to his reluctance.

King is a member of the Seven Deadly Sins and represents the Grizzly's Sin of Sloth. He is the master of the Black Hound, Oslow. King's real name is Fairy King Harlequin, and as the name suggests, he was the king of the fairies.

700 years prior to the start of the story, King left the Fairy world to locate a group of fairies led by his best friend Helbram; who had left the forest to trade with some humans. However, suffering a grievious injury in the process, he ended up forgetting who he was and his original mission. King spent the next 500 years in relative bliss and ignorance in the company of Diane, a child giant who saved him, slowly recovering his memories. It was only when he reunited with his friend again did King learn that his old friend was massacring countless humans over the centuries, an act which was practically a declaration of war between the Human and Fairy Clan. For his inaction to stop his friend from doing so all those years, King was sentenced to an imprisonment of over 1000 years. In the midst of it though, he was recruited into the Seven Deadly Sins.

After the incident in which the Sins were framed and forced to flee the country, King attempted to return to the Fairy King's forest only to learn that it had been burned down and that his sister Elaine, who had protected the forest in his stead, had been killed. When he learns that Ban is the supposed perpetrator of this crime, King briefly allies himself with the Holy Knights of Liones.

Gowther is a member of the Seven Deadly Sins, the Goat's Sin of Lust. He is a mysterious man who initially appeared as a large armored person second in size only to Diane. His armor was sighted in Ordan Forest whereupon Helbram sent Dawn Roar to capture him. Upon reuniting with the rest of the Sins, it was revealed that he is actually an effeminate looking, normal-sized man who went by the alias Armando. 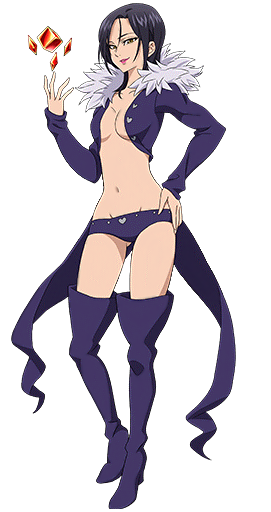 Merlin is the Boar's Sin of Gluttony and the mentor of Arthur Pendragon. Originally appearing as a cloaked person assisting Arthur, she finally reveals herself while fighting her apprentice Vivian. She is the greatest magician in all of Britannia. She is also the one who knocked Meliodas a decade ago when the Sins were framed in order to prevent him from getting angry. 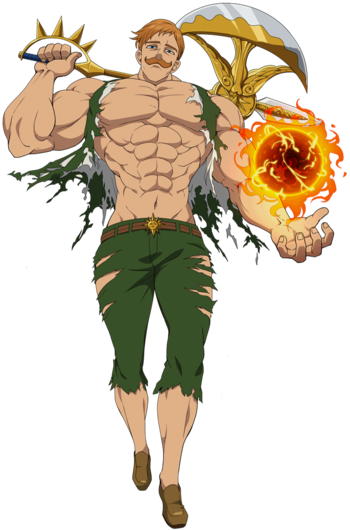 Escanor is the Lion's Sin of Pride and the last member of the Seven Deadly Sins to be introduced in the series proper. On his wanted poster, he is depicted as an older looking man, though the first Fanbook mentions that he's at present merely 40 years old.

Prior to his introduction in the series proper, he makes his first appearance in the side chapters detailing the Vampire incident in Edinburgh the Sins dealt with 12 years prior to the beginning of the story. Said chapters were released alongside the Blu-Ray DVD releases of the anime. There his dual personalities are revealed - his weak, skittish night-self, as well as his muscular, arrogant day-self.

He makes his first formal appearance in the series proper when Ban along with his two companions at the time stumble across a bar in a cave. There, he is presented as the bar's meek, mustachioed owner.

While the Sins as a group are the titular characters, they are joined alongside others who aren't a part of their order but are nonetheless closely affiliated with them as the main protagonists of the series. They are as well employees of the Boar Hat Bar which the Sins are also a part of from time to time. Although there have been others who have at one point or another traveled and aided the Sins as well, these characters have been the most consistent.

Elizabeth is the third princess of the kingdom of Liones, the adopted daughter of King Baltra Liones. As a good deal of the overall plot involves her, she is the primary main female protagonist of the series.

When the Holy Knights of Liones decided to usurp her father and subjugate the rest of Liones, Elizabeth set forth to search for the Seven Deadly Sins in order to recruit them to stop the Holy Knights. Upon recruiting Meliodas, she begins working as a waitress at the Boar Hat bar as she joins him in their journey to find the rest of the Sins and save Liones. 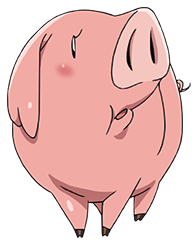 Hawk is a talking pig and Meliodas's companion. He is introduced as the cleaner of the Boar Hat bar who helps clean the disgusting food scraps. 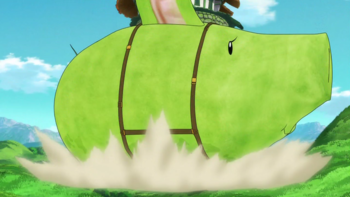 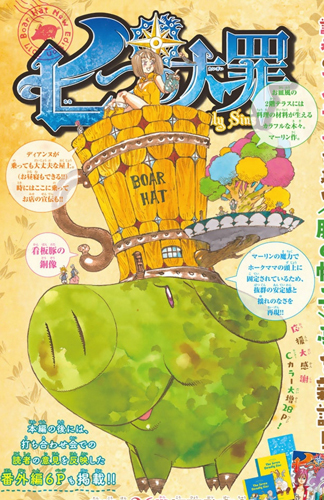 Hawk's Mom who happens to be a giant green pig and the reason why the Boar Hat is named as such as the bar serves as her "hat".