The characters of The Seven Deadly Sins that belong to the Goddess Clan.

The Goddess Clan is one the five major races in Britannia. About three thousand years prior to the story, they formed an alliance together with the giant, fairy, and human races known as Stigma in a war against the Demon Clan for which they were victorious against. It however came at a great cost as practically all of them used all of their power up sealing away the Demon King and the Ten Commandments, an act which caused them to lose their physical bodies during the Great War. As a consequence, what remaining members of their clan left have taken new forms either by residing in relics or otherwise.

An angelic and divine race, the Goddess Clan is greatly worshiped and revered in particular by humans in present times. However as holy as they may be, not everything about them is necessarily as black and white as it may appear to be especially in regards to what actually happened during the Great War.

Tropes pertaining to the Goddess Clan in general

The Governess of The Goddess Clan 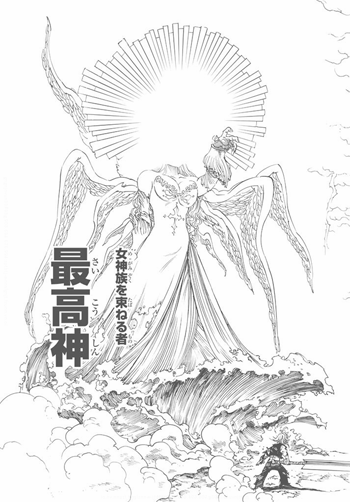 The Supreme Goddess is the leader of the entire Goddess Clan. She is also apparently Elizabeth's mother.

The Four Archangels are a group of four elite members of the Goddess Clan. As a group made up of really powerful individuals, they are the Goddess Clan equivalent to the Ten Commandments of the Demon Clan.

They are each equipped with an extremely powerful spell called a "Grace" that allows them to use the elements to their advantage, in a parallel to the Ten Commandments'.. well, "Commandments".

Tropes pertaining to the Four Archangels in general
Ludociel 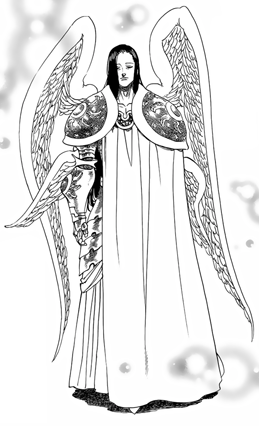 Ludociel is one of the Four Archangels. A four winged seemingly human-like Goddess Clan member, he is the one who came up with the plan in the past to use thousands of demon civilian hostages as bait of which he later killed. He bears the Grace of "Flash", which grants him blindingly fast speed.

Tarmiel is one of the Four Archangels. A six winged three headed Goddess Clan member, he is one of the two Archangels who engaged with the Ten Commandments in the past after Ludociel executed his plan. He bears the Grace of "Ocean", allowing him to turn his body into water and, most importantly, summon unlimited amounts of water from a pocket dimension.

Sariel is one of the Four Archangels. A four winged child-like Goddess Clan member, he is one of the two Archangels who engaged with the Ten Commandments in the past after Ludociel executed his plan. He bears the Grace of "Tornado", letting him manipulate wind freely. He's most often seen encased within a protective, razor-sharp (and invisible) wind sphere. 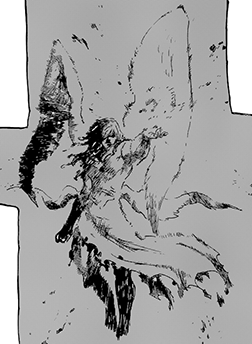 Mael is one of the Four Archangels. A four winged Goddess Clan member, he is Ludociel's younger brother. Unlike the other three Archangels who were introduced together that time Stigma clashed with the Demon Clan and the Ten Commandments, Mael was residing in the Goddess Realm at that moment. He was going to be summoned when things went awry but this was stopped by two of the Ten Commandments. It's then revealed much later that he was killed by Estarossa in the past, and that his Grace was "Sunshine". 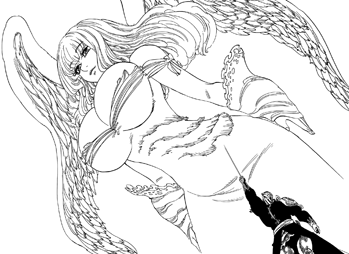 The first member of the Goddess Clan to make a appearance in the present time of the story proper per se, Nerobasta is a Divine Lance Corporal class goddess that resided in the sword Denzel wielded. She was a secret weapon that Denzel intended to use at the right moment. However, when faced against three of the Ten Commandments who threatened to do harm to his king and older brother Baltra as well as to everyone else with the king, Denzel decided to summon her at the cost of his own life. Upon being summoned, she entered Denzel's body to use as a vessel for her manifestation, only to run away upon realizing exactly who she was summoned to face. 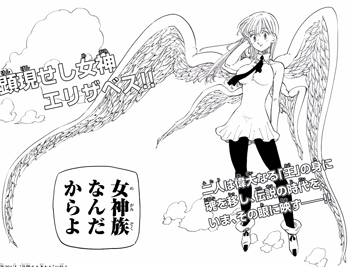 In the far off distant past, the original reincarnation of present day Elizabeth was that of a four winged goddess. She was Meliodas' lover and the one who convinced him to turn good. Unlike most other members of the Goddess Clan members, Elizabeth preferred peace with the Demon Clan rather than fighting with them.

See their entries in Druids. 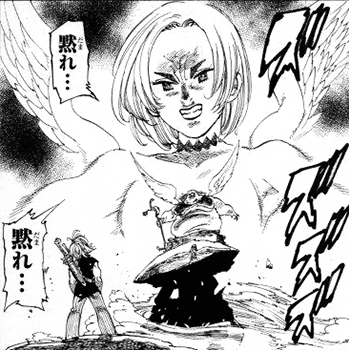 Jelamet is a Divine Lance Corporal class goddess. She is the one actually behind the Troll Queen incident that the Seven Deadly Sins dealt with 11 years prior to the story. Back then, she possessed a Troll Queen and with some trolls that she brainwashed, decided to take over a druid altar in the druid homeland of Istar. Knowing that the altar was one of the many gates that lead to the Sky Palace, she intended to occupy it and after her real body reconstructed, eventually summon her comrades sleeping in the sky in order to seize control of Britannia.