The characters of The Seven Deadly Sins that belong to the Liones Kingdom. These include the antagonistic Holy Knights of the kingdom, and others.

The initial antagonists of the series. They usurped King Baltra Liones and subjugated the rest of the kingdom in order to prepare for the Holy War. After the truth of the Seven Deadly Sins is finally brought to their attention, they all come to regret their past actions and work to live up to their actual namesakes.

Tropes pertaining to the Holy Knights in general 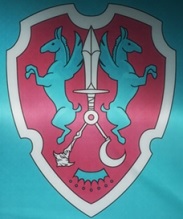 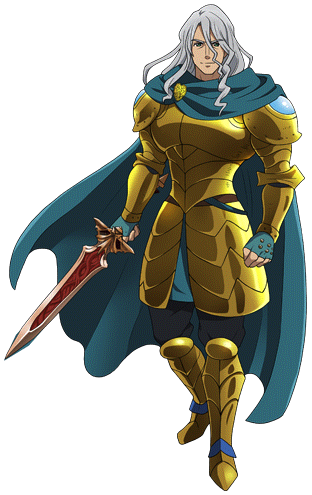 The previous Great Holy Knight of Liones who was murdered ten years before the start of the series for which the Seven Deadly Sins were framed for it. He is stated to be have been the strongest Holy Knight when was still alive. He is Gilthunder's father and Dreyfus' brother as well as Griamore's uncle.

Much like his son, Zaratras wields the power of thunder and lightning to great effect, combining blazingly-fast sword attacks with devastating blasts of magic. 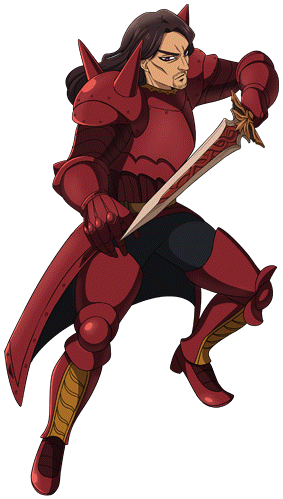 A Great Holy Knight and co-leader of the Holy Knights of Liones with Hendrickson. Among the two Great Holy Knights, Dreyfus is the more honorable of the two. He genuinely wants to protect the kingdom of Liones from the foretold Holy War. However, he is willing to do so even at the cost of the people he is trying to protect. He is also a very ambitious man who is willing to go to any lengths regardless who or what stands in his way. Despite this, he genuinely loves his son Griamore. He is also Zaratras' brother and Gilthunder's uncle.

In regards to the prophesied Holy War, Dreyfus regards the Sins to be the most likely candidates for whom the Holy Knights will fight against. In particular, he considers Meliodas to be the most threatening due to the latter's past.

Dreyfus' staunch determination is best showcased by his non-indicatively-titled magic, Break. As long as his mana doesn't run out and his will doesn't falter, Dreyfus will stay unharmed and use raw magic to enhance his physical attacks or fire scorching beams. 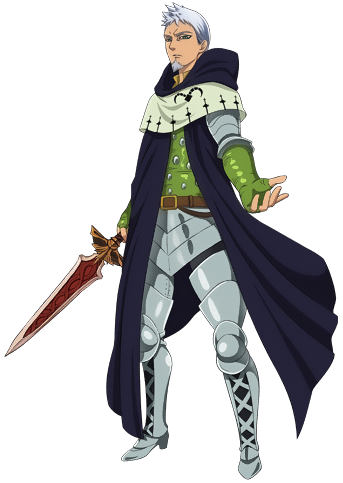 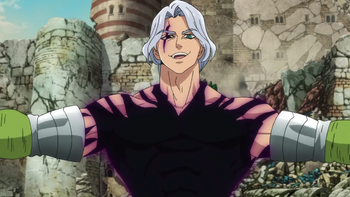 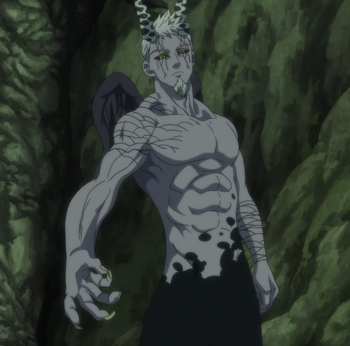 A Great Holy Knight who works alongside with Dreyfus over the Holy Knights of Liones. Unlike Dreyfus, Hendrickson is the less honorable. He strongly believes that their order solely exists for war and if they there is only peace, their existence is meaningless. For that, he greatly opposed King Baltra Liones' plans to completely avoid the foretold Holy War. In fact, he is actually manipulating several things behind the scenes in order for the war to be actually brought about.

Under his command is a large number of second generation Holy Knights. As a former Druid, Hendrickson knows the Purge spell to exorcise demons. He also developed Acid magic by himself, letting him dissolve opponents by simply touching them. 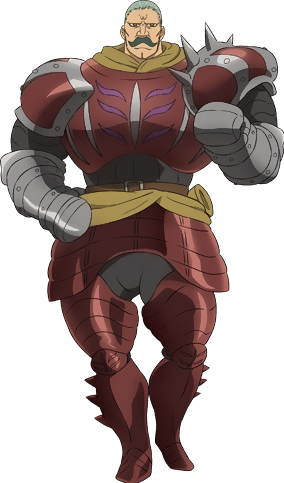 A large man who confronted Meliodas and Elizabeth but was defeated. He is actually not a proper Holy Knight but a subordinate with some authority and strength. Later, he was invited along with Jericho to officially join the Holy Knights. It didn't go well for him. 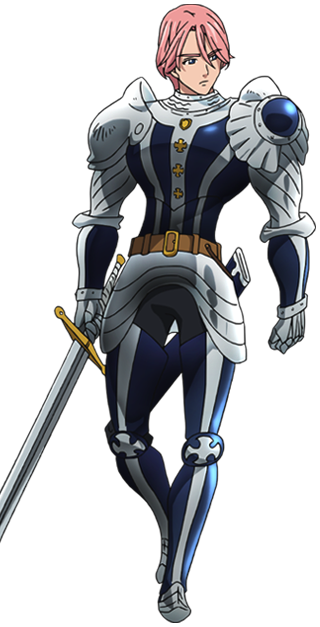 Gilthunder is a Holy Knight with dominion over magic that allows him to generate and manipulate lightning. He is the son of the murdered Great Holy Knight, Zaratras. His rank within the Holy Knight order is Diamond. 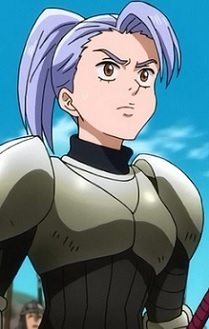 A Holy Knight apprentice who was stationed at Baste Dungeon where she was humiliated by Ban when the latter escaped. She later became an official Holy Knight when she along with Twigo were offered the position by Hendrickson. She alone got promoted. Later the demon blood causes her to go berserk and she is saved by Ban. She follows him as a Sidekick.

While relying on her speed and swordsmanship at first, losing her demonic powers led to a drastic drop in strength. After some intensive training, Jericho managed to unlock her inner magical ability, manipulating ice freely. 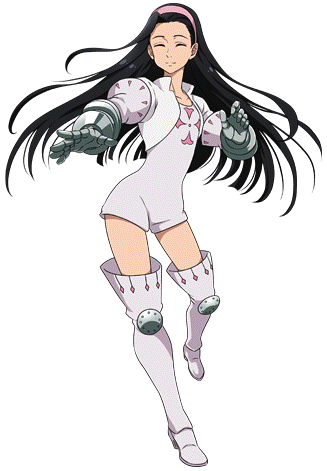 A female Holy Knight who was introduced when she was sent after the Sins in the Capital of the Dead. She is the daughter of Dale, a Holy Knight who once worshiped the Sins. After her father supposedly disappeared, she took on the responsibility of taking care of her brother, Zeal. She mostly answers directly to Helbram.

Polite to a fault and usually discreet, she distinguishes herself in combat with her magic, Explosion. Channeling it through her spear, Guila is a potent ranged fighter and a distinguished Holy Knight, respected among the army. 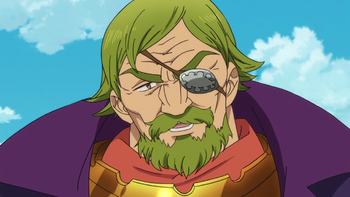 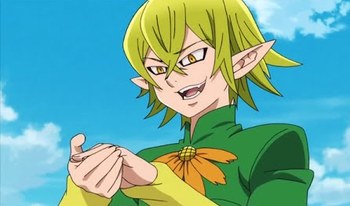 A Holy Knight in golden armor who primarily uses magic. He is Hendrickson's second-in-command and is identified as a Cardinal. He initially appears as an old man but apparently he has a past with King whom he calls "old friend".

Able to enchant himself with defensive boons, Helbram maintains a connection with an elite squad of guards through his magic, Link. As such, this gives him full access to a variety of elemental spells ranging from Ice to Death. 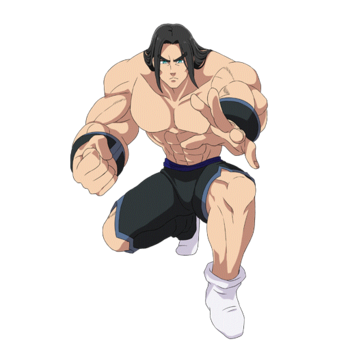 A huge hulking man who is charged with protecting Princess Veronica. He is the son of Dreyfus. A defensive warrior first and foremost, Griamore fights by creating magical barriers. 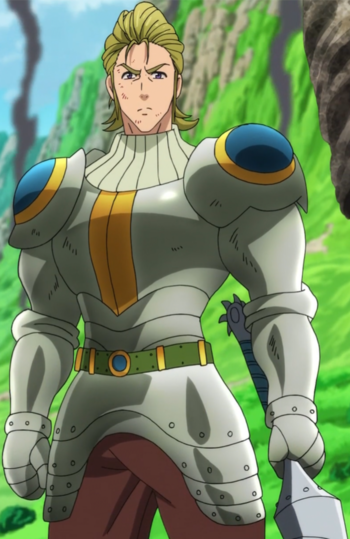 Howzer is a rather hotblooded Holy Knight who is a colleague and partner of Gilthunder. His rank within the Holy Knight order is Platinum. As free as the wind, his magical element, Howzer often butts with his hierarchy or his comrades due to his lack of discipline. His courage and honesty more than make up for it. 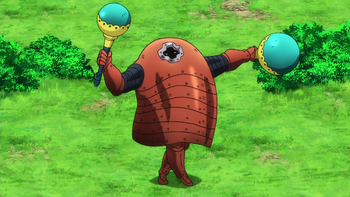 Marmas is a Holy Knight who wears an odd pillbug-like armor and uses maracas to cast gravity-based magic. 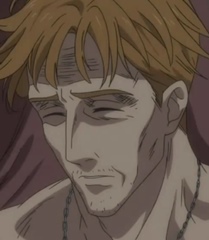 Dale was Guila and Zeal's ever doting father. He was a Holy Knight who back when the Seven Deady Sins weren't framed as murderers, wanted to be like them and become something his daughter would be proud of. He seemingly ran away and abandoned his children. 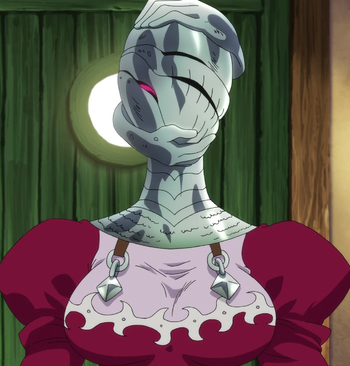 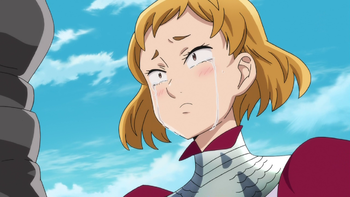 Vivian is a masked Holy Knight who directly serves under Great Holy Knight Hendrickson. She is the greatest magician in the Kingdom of Liones and the former apprentice of Merlin. 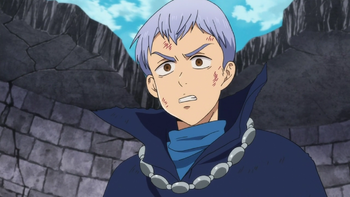 One of Helbram's subordinates and Jericho's brother. Manipulates Ice magic. 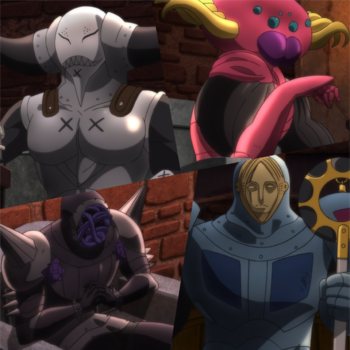 The Weird Fangs are a group of four Holy Knights that were stationed in the Baste dungeon. They antagonized Meliodas and the companions he had then when they came looking for Ban. Three of the Weird Fangs survived this encounter and it's revealed much later in the story that they were chased out of Liones for all the misdeeds that they had done, all of whom unmasked themselves. Unfortunately, a brazen attack by the Demon Clan whittled their number down even further to but one, Golgius.

Friesia is a member of the Weird Fangs who possesses bug themed armor and the ability to control bugs.

Golgius is a member of the Weird Fangs who possesses a distinctively demonic looking helmet. He enlists the aid of Dr. Dana to poison Meliodas with the promise that they'd return the doctor's daughter in return who the Weird Fangs had taken earlier. Fights through trickery, making himself invisible and stabbing people in the back more or less literally.

Ruin is a member of the Weird Fangs who possesses mainly illusion based abilities.

Jude is a member of the Weird Fangs who boasts to having captured Ban in the past. In reality though, Ban merely let himself be captured by Jude.

The Pleiades of the Azure Sky

A group of Holy Knights who serve under Lord Denzel Liones, assistant to the Great Holy Knight. They were stationed to guard the borders by Hendrickson and Dreyfus. As such, they weren't around when the Sins came back to the capital and cleared their names.

Tropes pertaining to The Pleiades in general
Denzel Liones

Lord Denzel Liones is the assistant to the Great Holy Knight and leader of the Pleiades of the Azure Sky. He is also King Baltra's younger brother. Able to cast curses involving karmic retribution.

Death Pierce is a long haired mustachioed member of the Pleiades of the Azure Sky. Along with his skills as a Holy Knight, he has a fairy friend named Invisible who aids him as a reconnaissance of sorts.

Waillo is a small but powerful member of the Pleiades of the Azure Sky. He has feelings for his fellow Pleiades member Deldrey for which she doesn't reciprocate.

Dogget is a tall and rather cocky member of the Pleiades of the Azure Sky. In particular when he, Death Pierce and Waillo confronted the Sins during their award ceremony for saving the kingdom to express some concerns as the Pleiades weren't around then, Dogget was the most confrontational of the three. Can move in short bursts of speed thanks to his ability, Boost.

Deldrey is a female mage member of the Pleiades of the Azure Sky. She and Arden are Canon Immigrants to the story having started as characters in the Seven Deadly Sins mobile game Knights in the Pocket. Is kind of a trickster, using Love magic to seduce male opponents without fault, leading them to drop their guard and become easy prey for her team.

Arden is spiky haired archer kid member of the Pleiades of the Azure Sky. He and Deldrey are Canon Immigrants to the story having started as characters in the Seven Deadly Sins mobile game Knights in the Pocket. Fights with a bow, imbuing his arrows with strength-draining magic.

Dawn Roar is an order of knights created by King Baltra Liones after the Seven Deadly Sins ran away for being framed for murder. They are basically the replacements for Sins. Like their predecessors originally were before, they are a faction that supposedly directly serves the king, completely independent from the Holy Knights. Despite this though, Dawn Roar has a nasty reputation for being a group that focuses primarily their targets. 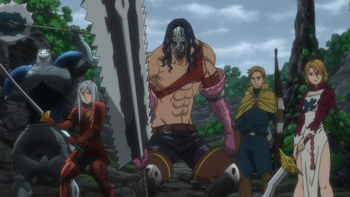 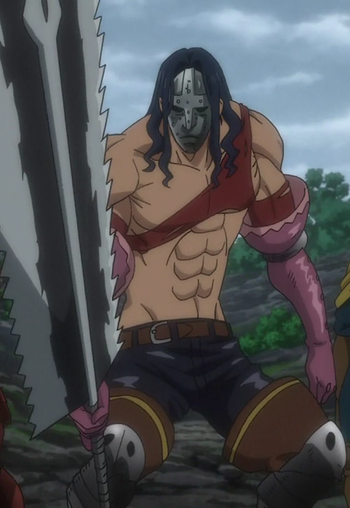 Slader is the captain of Dawn Roar. He is a knight that looks more like a horror movie slasher due to his Malevolent Masked Man and tattered shirt look. Adding to this thematic, Slader wields an enormous saw-blade, which he uses with gusto. Knows only one spell, which intimidates the target and stops it in its tracks.

Simon is a member of Dawn Roar who is apparently the youngest looking of the group. He wears armor that includes spaulders that resemble the sode of typical samurai armor, and uses iaido-like techniques.

Hugo is a member of Dawn Roar. Among them, he is the only one who wears a full set of armor in battle.

Jillian is a member of Dawn Roar and the only female in the group.

Weinheidt is a member of Dawn Roar who is so far primarily an archer.

Other characters from Liones 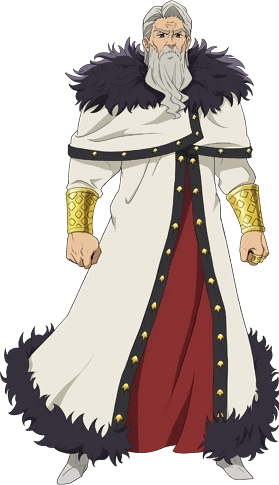 Baltra Liones is the eleventh king of the kingdom of Liones. He was overthrown by the by the Holy Knights of his kingdom and is currently being held captive. He is the father of Margaret and Veronica, and the adopted father of Elizabeth. He possesses the precognitive ability Vision which aptly gives him visions of the future, albeit vague and limited ones. 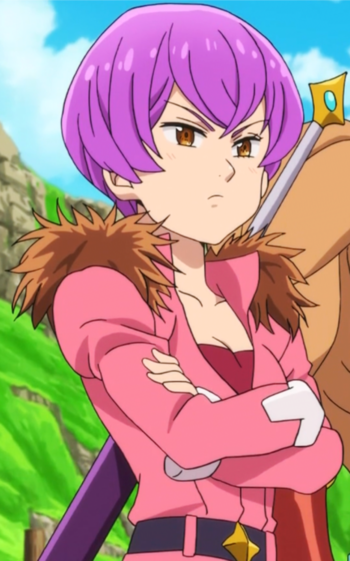 Veronica is the second princess of the kingdom of Liones. Though the Holy Knights overthrew her father, she decided to instead ally with them in order to prepare the kingdom for the foretold war. 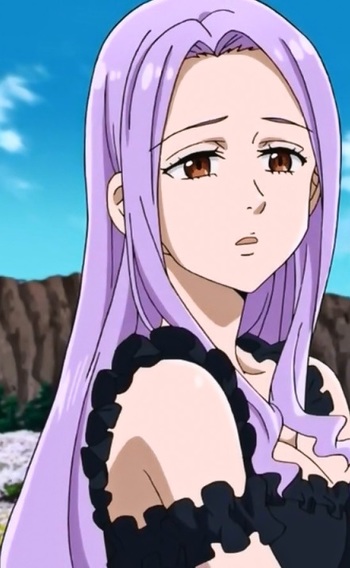 Margaret Liones is the first born princess of the Kingdom of Liones and elder sister to both Veronica and Elizabeth. 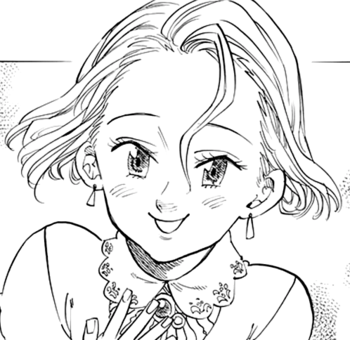 Nadja Liones is the elder sister of Baltra and Denzel who had died years prior. While exploring the ruins underneath Liones castle upon hearing about one of Baltra's premonitions, Nadja discovered Gowther. The two formed a bond and became romantically involved. However due to circumstances involving her illness, Gowther got accused of raping and killing her. It's this supposed crime that is labeled as Gowther's sin. 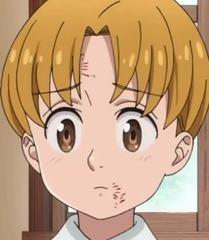 Zeal is Guila's younger brother and the son of Dale.