The characters of The Seven Deadly Sins that belong to the Demon Clan. These include various demons and those closely associated with them.

The Demon Clan is one the five major races in Britannia. About three thousand years prior to the story, they waged an ancient war against all the other races of the country. It was only through the combined efforts of the goddess, giant, fairy, and human races that the demons were defeated. The majority of the demons were sealed away in a prison created by the Goddess Clan after the war. The act of unsealing them from this prison so that the Holy Knights of Liones can go to war with them is the main motivation of Hendrickson in the first part of the story.

Despite the efforts to stop him, however, Hendrickson succeeds in freeing a few of them thanks to some hidden help. With their release, these demons become the second main antagonists of the series.

Tropes pertaining to the Demon Clan in general

The Ruler of The Demon Clan 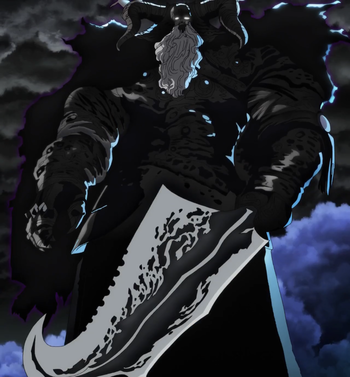 The Demon King is the leader of the entire Demon Clan. He is the father of Meliodas and Zeldris. And one of Chaos’s creations.

The Ten Commandments are a group of the Demon Clan's most elite warriors who serve directly under the Demon King.

Tropes pertaining to the Ten Commandments in general 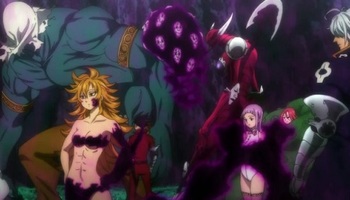 These are the Ten Commandments who were introduced as the group's current roster when Hendrickson freed them. 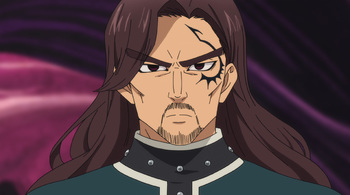 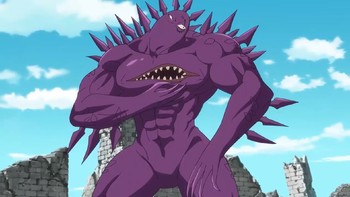 The first of the Ten Commandments to appear, who avoided being sealed with the rest of the demons by currently unspecified means. Sixteen years prior to the series he confronted and was defeated by Meliodas and ten years prior he possessed Dreyfus and preceded to orchestrate the series of events which set the plot in motion. He is the "Selflessness" of the Ten Commandments.

Fraudrin possesses the Full Size magic ability, which allows him to inflate and grow at will. On the battlefield, Fraudrin is most often seen hamming it up as a colossus-like menace. He is also able to cast various mind and memory-related spells, such as amnesia and possession.

Zeldris' older brother and Meliodas' younger brother who, oddly enough, greatly resembles Meliodas' wanted poster. He is the "Love" of the Ten Commandments. His arrival into the Commandments' ranks coincided with the beginning of Great Holy War.

His personality is oddly serene. He's very calm and collected most of the time, and possesses an old sort of aura about him. No one is quite sure what he's thinking, and he himself is riddled with contradictions. Eventually, it becomes clear that there's something really wrong with Estarossa, but exactly what isn't revealed until much later.

He is able to summon swords from another dimension, forcefully transform living beings into demons, wield standard darkness and hellfire powers, cast a physical version of Full Counter and more. 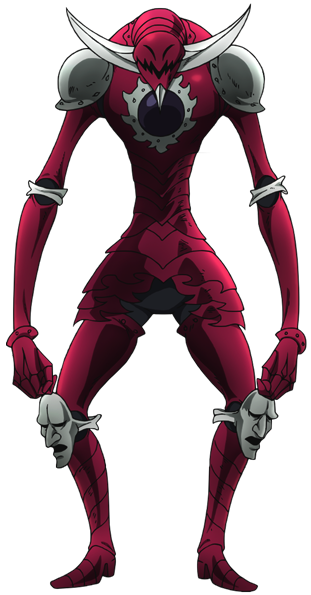 A tall, fully armored, almost skeletal being and the "Truth" of the Ten Commandments. 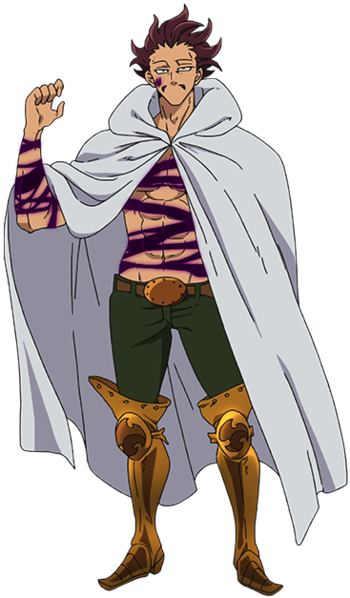 A mustached human looking demon wearing a white cloak. He is usually seen in Derieri's company. According to the second Fanbook, he is the "Silence" of the Ten Commandments.

Described as one of the greatest masters of Hellfire to ever live, Monspeet lives up to the hype with a variety of fiery spells. He also possesses the Trick Star ability, allowing him to switch two objects' place as long as their size is similar.

The nude and apathetic woman who is usually seen in Monspiet's company. She is the "Purity" of the Ten Commandments.

While fighting, Derrierie turns into an ultra-violent berserker, boosted by her magical ability Combo Star. For each punch she lands, she adds a whopping 100 tons of raw force to her next blow, completely overwhelming the victims of her wrath. 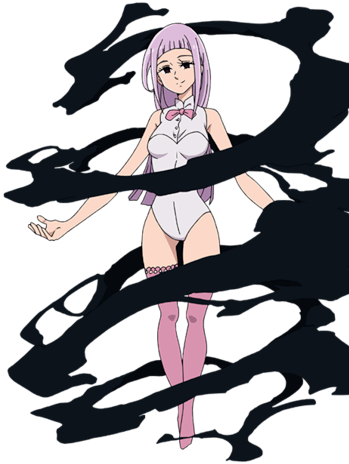 A female demon with a large scarf made out of darkness, often seen hanging out around Galand. She is the "Faith" of the Ten Commandments.

Melascula is seldom seen fighting. She prefers opening hellgates to summon legions of mooks, or using necromancy to achieve the same effect. 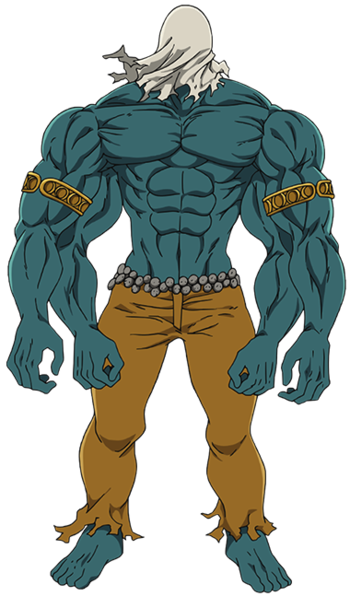 A blue skinned giant with four arms and a perpetually covered face who is apparently the legendary ancestor of the Giant Clan. At some point humans began calling him Balor, a name he resents, seemingly for that reason alone. According to the second Fanbook, he is the "Patience" of the Ten Commandments.

As a Giant, Dolor has a natural affinity with earth and minerals. By dancing, Dolor can attune himself to his surroundings and completely remodel the landscape. 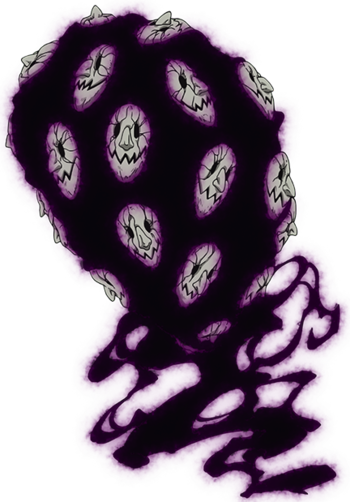 A large miasma-like monster with numerous gray masks adorning her body and the "Pacifism" of the Ten Commandments. 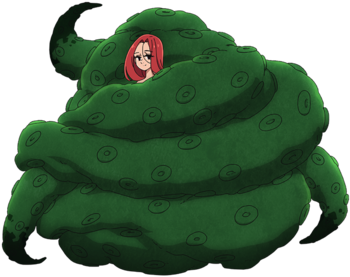 A very effeminate, child-like looking demon who was initially assumed to be a girl surrounded by giant tentacles. In reality, he's apparently the very first Fairy King who was allegedly said to have been killed by the Demon King in the war 3000 years prior. He is the "Repose" of the Ten Commandments.

Much like King himself, Gloxinia also wields a spirit spear, Basquias. Most often looking like a set of cuddly tentacles, Basquias can morph at a moment's notice into a laser spear, an armor, a gigantic wasp or a rose able to cure any and all wounds. More generally, Gloxinia can control plant life at will.

These are characters who once belonged to the Ten Commandments in the distant past but for varying circumstances either left or were replaced.

Since this character is a Walking Spoiler, all spoilers are unmarked. You Have Been Warned! 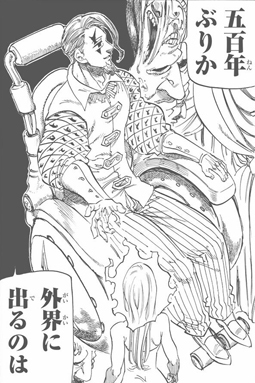 According to Fraudrin's suspicions, Gowther is actually one of the Ten Commandments. More specifically, he's the "Selflessness" of the Ten Commandments. About 3000 years ago, he belonged to their ranks but due to unforeseen circumstances, he vanished and his whereabouts became a mystery. Fraudrin further explains that due to the curse of his own commandment, he lost his all of his memories, feelings, and entire sense-of-self. Consequently, Gowther himself is unaware of all of this.

See Gowther's entry in the Seven Deadly Sins, for tropes related to the doll Gowther as a member of said group.

The Six Black Knights are a group of warriors from the Demon Clan. Originally briefly mentioned offhand in a flashback in the manga proper, it was later revealed in an announcement that they're going to be the main villains in the upcoming movie, Seven Deadly Sins: Prisoners of the Sky.

Tropes pertaining to the Six Black Knights in general
Bellion

The leader of the Six Black Knights and main villain of the movie, Seven Deadly Sins: Prisoners of the Sky. In order to break the 3,000 year old seal on a certain demonic beast, he seeks the lives of the sky tribe people.

An armored member of the Six Black Knights that appears to be the same type of demon that Galan from the Ten Commandments is. 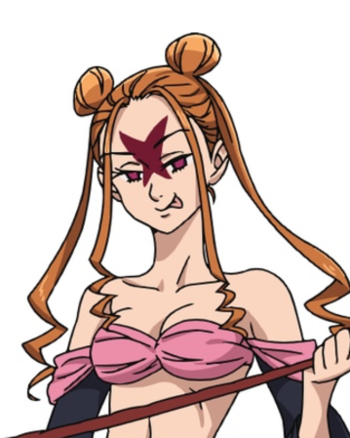 The sole female member of the Six Black Knights.

A green skinned member of the Six Black Knights that appears to be the same type of demon that Fraudrin from the Ten Commandments is.

A lion-like member of the Six Black Knights. 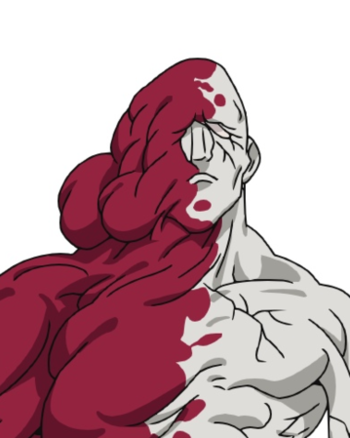 A member of the Six Black Knights who has the most body horrific appearance. 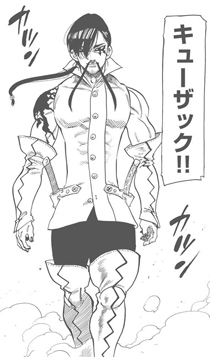 A demon who once served as the mentor to Zeldris. He and Chandler are actually demons far greater than the Ten Commandments. However as the goddess seal holding the Demon Clan in their prison bind more tighter the greater a demon is, they were unable to join the Ten Commandments and the rest of the demons that came out initially. Due to effects of the seal though both Cusack and Chandler were significantly weakened and thus they were able to eventually break free. Upon escaping, they immediately decided to aid Zeldris as the majority of the Ten Commandments had been defeated one way or another by the time the two got out.
Chandler 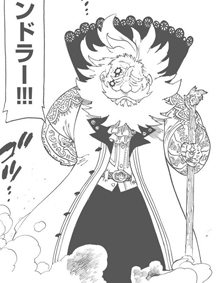 A demon who once served as the mentor to Meliodas. He and Cusack are actually demons far greater than the Ten Commandments. However as the goddess seal holding the Demon Clan in their prison bind more tighter the greater a demon is, they were unable to join the Ten Commandments and the rest of the demons that came out initially. Due to effects of the seal though both Cusack and Chandler were significantly weakened and thus they were able to eventually break free. Upon escaping, they immediately decided to aid Zeldris as the majority of the Ten Commandments had been defeated one way or another by the time the two got out.

Posing as a talented wizard armed with innumerable spell of great potency, Chandler actually specializes in swordsmanship with a very, very, VERY long cane-sword. Has mastered Full Counter and taught it to Meliodas.

Golems created by the Demon Clan that they use as weapons alongside their regular troops.

A group of vampires that the Seven Deadly Sins defeated in the past. Long ago, the Vampire Clan served as vassals of the Demon Clan via a treaty. That treaty however was broken and as punishment the clan was sealed away in a sarcophagus. 12 years prior to the story though, they were mysteriously freed and took over the entire kingdom of Edinburgh, with the entire populace either massacred or turned into vampires. Led by the Vampire King, they intended to conquer Liones and beyond. Seeing the threat, the Seven Deadly Sins were sent to deal with them.

The vampires and the entire Edinburgh incident have been mentioned in passing occasionally in the series proper. The entire incident though is detailed in a side story that's accompanied with the Blu-ray DVD releases of the anime.

A royal member of the Vampire Clan. She was Zeldris' lover until he was forced to seal her away along with her clan.