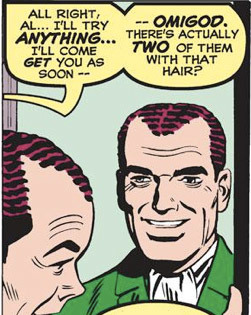 For the record, the third generation male had the same hairstyle as well.

Seen that ridiculous hairstyle? Turns out it's hereditary. Most of the time, it's an Improbable Hairstyle and often a subtrope of Anime Hair. It is also a type of Strong Family Resemblance. For a similar trope that may overlap, but deals with hair color rather than style, see Hair Color Spoiler. May be part of Generation Xerox.