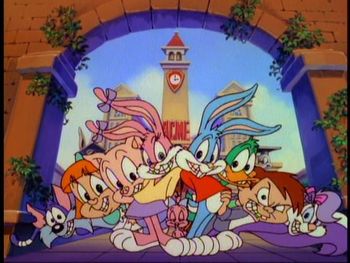 A revival of sorts for the Looney Tunes style of comedy, using fun-sized, teenage Toons highly reminiscent of several classic characters. But rather than pure rip-offs, they were actually being taught in school by the originals on being funny and the finer parts of Cartoon Physics and being a Toon. This continues the proud tradition of Warner Bros. animation having a heavy dose of meta-humor, shtick and Lampshade Hanging of many cartoon tropes, but this also incorporated themes of adolescence, Aesops, and '90s sensibilities. It was executive produced by Steven Spielberg, who, along with fellow executive Tom Ruegger, thought the Looney Tunes style was due for a makeover on television after the success of Who Framed Roger Rabbit.

TTA started the Renaissance Age of Warner Bros. cartoons, resulting in similar shows that shared many of the same tropes and were produced in much the same way (writing, storyboards, layout, voice work and some animation done in the USA; with animation, paint, and camera work done by Asian, Canadian and New Zealand studios — TMS excluded; they preferred to do most of their own work themselves, albeit with an uncredited staff). It was also one of the first shows not made by Disney to contribute to the '90s animation boom, following The Simpsons by less than a year.

Episodes were either broken into three 7-minute shorts, or made into half-hour full-episode adventures. Similarly, these would be split among stories dealing with misadventures in school, Looney Tunes-like shorts out in Acme Acres, or the occasional music video (the show's renditions of They Might Be Giants' "Istanbul (Not Constantinople)" and "Particle Man", for example, are favorites amongst fans of both the show and the band to this day).

A feature-length direct-to-video movie, Tiny Toon Adventures: How I Spent My Vacation, shows the misadventures of the kids on various summer road trips. It was eventually split up into four parts and worked into the show's syndicated run.

The show was a precursor to — and the inspiration for — Animaniacs; they were both produced by the same staff and shared many of the same writers. The main difference is that Tiny Toons generally had all the characters interacting with each other, while Animaniacs focused mostly on individual characters or groups for their Three Shorts. The two universes intersected in the ill-fated 1998-1999 retooling of Animaniacs' popular spinoff, Pinky, Elmyra & the Brain

The show spawned copious amounts of merchandise, most notably video games from Konami. It also had toys from McDonald's, plush dolls produced by Hasbro through Playskool, and two separate comic book series, one produced in North American magazines by DC Comics, and another series published in traditional comic book issues for most of Europe by, of all people, Marvel Comicsnote The complicated legal wranglings with both companies are actively keeping these comics from getting reprinted, in both territories.

The first season is now available on iTunes, broken up into volumes. Here

it is. The entire series is available on DVD.

The show has reaired in Russia since 2010, "It's a Wonderful Tiny Toons Christmas Special" reaired in the UK in December 2011, and the one hour special "Night Ghoulery" on Vortexx on October 27, 2012, with a repeat airing a month later on November 24. Tiny Toons went on to air on The Hub (now Discovery Family) from July 1, 2013 to June 8, 2015. In 2018, the entire series came to Hulu as part of the deal for the streaming service to revive Animaniacs, alongside How I Spent My Vacation and the Night Ghoulery and Spring Break specials.

On October 28, 2020, it was announced that a reboot, called Tiny Toons Looniversity, is being produced for HBO Max and Cartoon Network. Spielberg will return as executive producer, with Erin Gibson (of the podcast Throwing Shade) will serve as co-executive producer and showrunner. On November 1, 2020, Cree Summer revealed Elmyra was not returning.