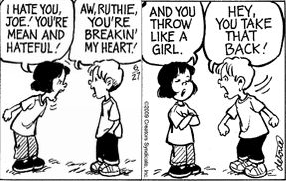 "Ugly Dog Theory: In a comedy, whenever someone is being pummeled with insults, it's always the last and most seemingly innocent insult that evokes a heated response. Example: 'You're ugly, your mother is ugly, your brother is ugly and your dog is ugly!' Response: 'You can't talk that way about my dog!'"
— Roger Ebert
Advertisement:

Someone accused of Arson, Murder, and Jaywalking only takes serious offense to the claims of jaywalking.

After being given a Long List of their flaws and transgressions, a character responds by selecting one of the flaws and saying "I am not (flaw)!" as if to imply that all the other flaws were all spot-on. For maximum comedic effect, offense is taken to the mildest one in the list, or the offended has to ask the offender to repeat the one he's insulted by ("Hey, I am NOT a... um, what was that last one again?") which insinuates that all of them may be accurate. Frequently, they'll be entirely justified. Despite the name, the character doesn't always pick the last one. If their Berserk Button comes up, it's going to offend them more than any other insult. It can be used sarcastically with Lovable Rogues, and a staple of the Deadpan Snarker. Sometimes refuting the most easily refuted charge can discredit the whole string for an in-story audience.

Alternatively, a character may take umbrage at all the insults, but address the one that bothers them most rather than getting into a point-by-point argument or address one that isn't a matter of opinion. Sometimes, it's just that only one of the set of insults actually matters, to either the speaker or target or both.

This can also be used for character exposition. A villain may not care about being called a brute or a sadist, but be offended by being called a wimp.

In Real Life, it's done as an Insult Backfire, as they respond to the petty insult while ignoring the larger ones as if to say "It's not worth my time".

A variation on this is for the character to claim that the string of insults is a half-truth, letting the viewer try to decide which parts are true or not. It's occasionally inverted with a bullying character playing the Jerk with a Heart of Jerk card and "apologizing" for an insult in a way that degrades the insultee(s) more. For example, calling an entire group of people "pigs" and then saying: "I'm sorry. I hope I didn't offend any pigs." Or calling someone "ugly" and, when an apology is demanded, saying: "Okay, I'm sorry you're ugly."

Compare: My Friends... and Zoidberg, Insult Backfire, and Wrong Insult Offence. This is a case of the character on the receiving end of Comically Missing the Point.

Jack: You're still just a common killer.
Sean: What did you call me?
Jack: 'Killer?'
Sean: No, the other one!

Subverted when Gene happily takes ownership of all Sam's insults:
Gene Hunt: I think you've forgotten who you're talking to.
Sam Tyler: An overweight, over the hill, nicotine-stained, borderline alcoholic, homophobe with a superiority complex and an unhealthy obsession with male bonding.
Gene Hunt: You make that sound like a bad thing.

Although Eggman confronts US President Shadow for making furries legal, he only tries to kill him after a particularly immature insult.

Alternative Title(s): I Take Offence To That Last One

Although Eggman confronts US President Shadow for making furries legal, he only tries to kill him after a particularly immature insult.