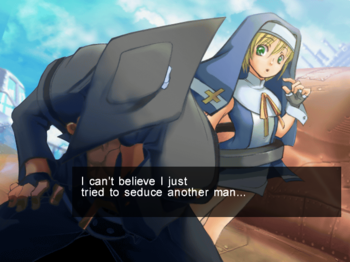 If it makes you feel any better, Bridget eventually identifies as female!
"Not her! Not her! She pees standing up!"
— Gary, Bachelor Party
Advertisement:

Sexual attraction is a funny thing, and sometimes if a character physically appears to be the right gender to appeal to their sexual orientation, then they'll become attracted to them, regardless of what that character's actual gender might be. Usually, said character's true gender is being kept secret purposefully, and they are a male Disguised in Drag or a female disguised as a male (sometimes even using a realistic mask or a Full-Body Disguise), but, whether the misunderstanding was intentional or not, due to Rule of Drama, they will find out, and it will be awkward, hilarious and possibly traumatizing for all involved.

This works equally well with straight people as it does gay ones.note Asexuals — who wouldn't be interested either way — and bisexuals and pansexuals — who wouldn't mind either way — are usually immune to this trope, though. A straight female might be shocked to realize that hot guy she's been daydreaming about was "actually" a woman. Her male Gay Best Friend, who was also daydreaming about the same guy (who is "really" a girl) will probably feel similarly. Almost always there is shock upon The Reveal, probably disappointment and maybe even disgust on the part of the character who was feeling the attraction, but usually the two characters can reconcile by the end and become friends. Other times it might not bother them, or after a period of consideration, they'll decide If It's You, It's Okay.

It's also worth noting that, in many examples of this trope, it's not the gender (i.e., gender identity) that's a shocker, but the genitals (granted, examples portraying crossdressers vastly outnumber any portraying those who are transgender). One common example is that a straight man is attracted to a woman, but finds out that she's transgender and has a penis. In Real Life, "trans panic

" can have violent or even lethal consequences, as numerous trans people—especially trans women, and especially especially trans women from marginalized ethnicities (for example, Black people in The United States)—have been physically or sexually assaulted, sometimes even murdered, when their genitals are revealed. With the growing LGBT Civil Rights movement catching on in the Turn of the Millennium and The New '10s, this is starting to lean more towards a Discredited Trope, though it still occasionally pops up.

Formerly called "Dropped A Bridget On Him", a play on the Guilty Gear character (shown above) and the Dropped a Bridge on Him trope; references back to this title are still scattered around the site.