The Napoleon
aka: Napoleon Complex 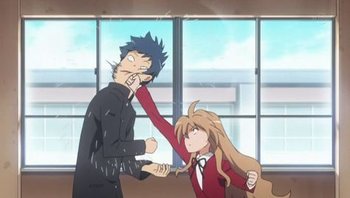 Don't ask how Taiga is able to hit a guy that much taller than her without jumping. Seriously. Don't. She might hit you next!
"You may inhabit a laughably small frame — Really tiny. Borderline miniature. — But the point is that it's filled with rage!"
— Tiny Duke of Wellington, The Daily Show
Advertisement:

The natural counterpart to the Gentle Giant. While the Gentle Giant is large and kind-hearted, the Napoleon is Hot-Blooded, aggressive and short. These characters come in a variety of flavors: they might be physically belligerent or merely pushy; they might be compensating for their lack of height by acting "big", or it might just be an incidental part of their character. By and large, small things are Acceptable Targets, so expect the Napoleon to be a villain, a Knight Templar or the Butt-Monkey. If portrayed as one of the good guys, consider him as an Anti-Hero, Good Is Not Nice, Grumpy Bear, Jerk with a Heart of Gold or Hidden Heart of Gold.

The name comes from "Napoleon complex" (popularly known as "short-man syndrome"), an inferiority complex said to be suffered by short people. Aggressive or dangerous people who are short are often labeled as such to mock them. This was most famously done to the legendary French emperor, Napoléon Bonaparte. Although Napoleon was of average height for his nationality and time period, a number of different factors created the widely held urban legend that he was quite short — mostly stemming from a discrepancy between English and French measurement systems that got Lost in Translation and the fact he often surrounded himself with tall bodyguards. English propaganda of the time seized on the perception and portrayed him as comically short to deflate his image.

Thanks to many people associating "short" with "young," this trope often becomes a Self-Fulfilling Prophecy because short people are often treated like children/teenagers (whether from genuine mistakes or outright condescension) well into their adult years, and they get fed up with not being taken seriously.

Most characters, usually males, with this complex are known for having a Hair-Trigger Temper, or at least a big Berserk Button concerning their height. Females may overlap with Tiny Tyrannical Girl.

Related to Height Angst. See Mister Big for when a short character is the head of a villainous organisation, Mister Muffykins for the canine version, and Cats Are Mean for the feline version of this trope. Compare A-Cup Angst, when a female character feels inferior due to a lack of outward growth, and Tiny Tyrannical Girl for a specifically-female version of this who's not only angry but downright dictatorial. Napoleons might use a Hitler Cam and/or Scully Box to appear taller.

Not to be confused with Napoleon Delusion.

The smallest of Arlo's friends has quite a temper on him.

The smallest of Arlo's friends has quite a temper on him.