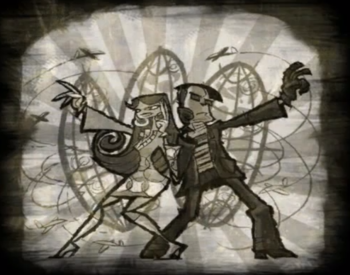 Parachute. Grab a drink. Save the world.
"There's a man who leads a life of danger
To everyone he meets he stays a stranger
With every move he makes another chance he takes
Odds are he won't live to see tomorrow."
— Johnny Rivers, "Secret Agent Man"
Advertisement:

Related to the Action Series, although not necessarily a series, and not necessarily even action-heavy, it's any work in which the main character or characters are spies, secret agents, double agents, or some other form of espionage professional. Spy Fiction tends to fall along a spectrum of what we've dubbed "flavours": From "Martini" to "Stale Beer".

In other words, the Tuxedo Approach would have a
Advertisement:
Soviet defector be a gorgeous, aloof Slavic beauty with whom the hero will probably elope at some point; the Stale Beer Approach would have a Soviet defector be a shaken, morally gray individual looking more for personal profit or some other material bebefit (e.g. trying to get out of the way of an impending purge) than for any virtues of right or wrong.

The Martini Flavored and Stale Beer Flavored tropes as well as the various trope permutations (Dirty Martini and Bathtub Gin) may involve a Cloak & Dagger agency, Agents Dating, or any of the full gamut of Espionage Tropes.

See Spy Literature for an index of literature in the Spy Fiction category, and Ninja Fiction for a genre with some overlap. If you're looking for the Swery65 game called Spy Fiction, look here.

A note: the examples do not have to fit EXCLUSIVELY into their category, but they must fit most of the category's criteria. - Something that is "Martini with hints of stale beer" will fit into Martini, but something that is "Martini with strong elements of Stale Beer" will fit into Dirty Martini. Of course, as always, this is a wiki, feel free to correct/edit.
open/close all folders
Martini
Stale Beer
Dirty Martini
Margaritas (parodies)
Other Intoxicants