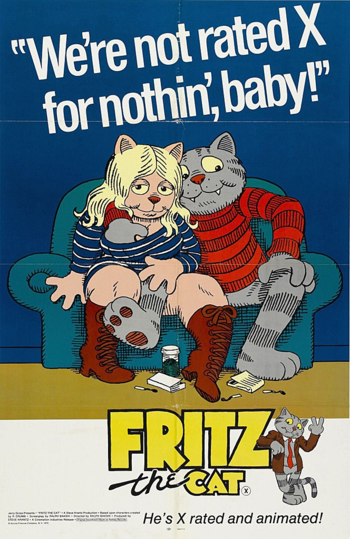 Juuust in case the protagonist stuffing his hand down his girlfriend's shirt and flipping England's version of the bird didn't tip you off...note And for some parents, it still didn't.
"This is clearly one of the year's best films. Every time an animated film is successful, you have to read all over again about how animation isn't 'just for children' but 'for the whole family,' and 'even for adults going on their own.' No kidding!"
— Roger Ebert on Ratatouille
Advertisement:

Animation has the reputation of being a frivolous medium suitable primarily for children, under the age of 12.

There are many sociological theories as to how and why this trope originated, but one of the most common theories is that it's a by-product of the rise of animation on television in the '50s and '60s with many adults uninterested in the low quality of many of these, and thus only kids being able to tolerate it, as well as television at the time being marketed as a way of keeping kids quiet and the rise of parental groups arguing for more government regulation on the content of these programs.

This mindset often results in bad cases of Executive Meddling. Once television animation became associated with children, the producers of animated shows began writing down to their presumed audience, which made animation outside the age ghetto less profitable than animation inside it. Anything considered safe for children can potentially be licensed out for merchandise, which is nearly guaranteed to sell, making many shows 30-minute commercials, FCC regulations permitting. The age ghetto paints older demographics as unprofitable.

These days, the ghetto is not as strong as it used to be, due to the successes of Japanese anime as well as American shows such as South Park, Family Guy, Rick and Morty, The Simpsons, BoJack Horseman and Futurama, though some of these shows' reliance on Vulgar Humor has led to a new misconception that all animation made for adults is an Animated Shock Comedy. Similarly, many people assume that All Anime Is Naughty Tentacles.

The Internet also helped weaken the ghetto. Before Internet access became widespread, animated short films (which in general have mature themes) were only available in universities that catered towards that specific field, but the Internet helped many artists publish those projects for a mainstream audience. Similarly, anime aimed at adults was limited to science fiction conventions and college campuses, but now has a worldwide following. However, the Internet-based ghetto tends to reach the other way; thanks to animation's growing reputation as a medium for all demographics, many forum users sometimes express surprise that a well-written show was made purely for kids or try to play up the Multiple Demographic Appeal to separate it from "other" kids' shows, thanks to the ghetto stereotype of "for kids = bad writing."

To a lesser extent, the same goes with animated feature films. Yes, there are pure kiddieville films made, but if you want to make big money in that field, you must appeal to adults at some level—though this applies chiefly to All-CGI Cartoon films, as traditional 2D animation is still not taken seriously, thus 2D is regarded as "dead" by the Western animation industry whereas 3D can serve as a compromise between animation and live action. However, animated films have yet to see the same growth of adult-oriented material that animated TV series have, and as such are much more affected by the ghetto, especially with purely 3D CGI Western animation.

Modern media with Black-and-White Morality are also very strongly associated with this ghetto as young children generally don't understand nuances in morality and The Moral Substitute does not allow room for any moral ambiguity.

For associated tropes, see All Animation Is Disney, Girl-Show Ghetto, Public Medium Ignorance, R-Rated Opening, The Dark Age of Animation, What Do You Mean, It's Not for Kids?, Comedy Ghetto and Sci Fi Ghetto. Contrast with Animated Shock Comedy and All Anime Is Naughty Tentacles.

open/close all folders
Advertising
Anime and Manga
Arts
Comic Books
Comic Strips
Eastern Animation
Films — Animation
Films — Live-Action
Literature
Live-Action TV
Music
Puppet Shows
Theatre
Video Games
Video games themselves are an aversion, and perhaps even with an inversion. Once consoles that were able to feature live-action scenes, such as the Philips CD-i and the 3DO, came out, with commercials saying that the consoles could feature live-action video, many called it "the future of gaming", even though the consoles they were on had a high price and few bought them. While the technology was new and exciting at first, it quickly delved into "Seinfeld" Is Unfunny territory because their gameplay was usually very limited, and the acting was almost always horrible. This, coupled with the huge budget needed to make such a game (Ground Zero Texas and Sewer Shark, full-motion video games on the Sega CD, both cost 3 million dollars each to make) and generally poor reviews (though Sewer Shark was more widely praised, Ground Zero Texas got a score of 20% on Sega16), led quickly to the death of the genre. Nowadays, admitting to wanting live-action in a video game is like saying that you want your game to be horrible. This doesn't keep prevent the medium from having its own age ghettoes, though...
Web Animation
Webcomics
Web Original
Web Videos
Western Animation
Other

Alternative Title(s): Cartoons Are For Kids