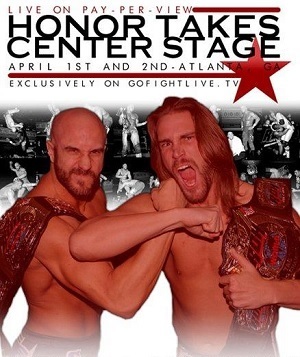 Uppercuts And Elbows For Everyone!note Not pictured: Koppu Kicks
"Expelliarmus is a useful spell, Harry, but the Death Eaters seem to think it is your signature move, and I urge you not to let it become so!"
— R. J. Lupin, Harry Potter and the Deathly Hallows
Advertisement:

Many characters have a specific skill, attack, taunt, evasive maneuver, and/or spell they use more frequently than any of their other ones; this is the character's Signature Move. Sometimes, however, a Signature Move, like a Catchphrase, may turn out to be more an example of Never Live It Down; i.e. the character doesn't actually use the move that much, but everyone calls it their signature move.

Sometimes characters who are of a similar group or background will have a Shared Signature Move that is taught amongst them. It could be because they're from the same family or school of fighting.

Any move or trope listed on Grandfather Clause is likely a Signature Move, as well. When most of the cast has one it's Everyone Has a Special Move. Compare Fighting Fingerprint. For video game enemy moves that are Signature Moves because of how dangerous they are to the player, see That One Attack. For skills and attacks that only a single character or handful of characters can use, see Secret Art.