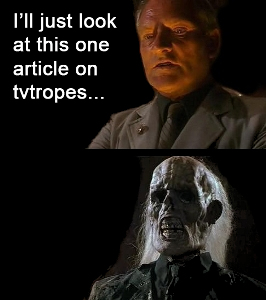 We warned you.
"I have lived for over a hundred years and read thousands upon thousands of [articles], yet each piece of knowledge I acquire only reminds me of my ignorance, because it invariably teases me with hints of a dozen new things I have no knowledge of."
— Nallab, Dinotopia Lost, paraphrased.
Advertisement:

Screw the future tense of TV Tropes Will Ruin Your Life! For some of us, it has already happened! If it has, let us know! TV Tropes can easily ruin your life, but not in the common sense. It's more of a cool way of ruining your life, like turning you into a mutant zombie or a super hot vampire that girls love even though you'll probably suck the life out of them.

But this is Just for Fun. If you actually got into some sort of major trouble due to TV Tropes, there are better places to write about it than this. This page is just for listing either real or made up things that TV Tropes made some problems for you.

Compare You Know You Read Too Much TV Tropes When....

Contrast TV Tropes Will Enhance Your Life, and TV Tropes Enhanced My Life.

TV Tropes made me lose the game.