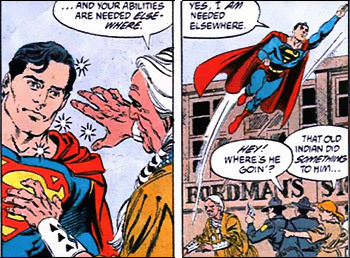 When characters possess powers or some kind of phlebotinum that allow them to escape the attention of guards, to improve their stealth, to erase their tracks and to help them maintain the Masquerade. If especially strong, can function as a Compelling Voice that can control minds. If it only affects the Weak-Willed, but affects them strongly, it's a form of Charm Person.

See also Perception Filter, which is more passive. Sometimes overlaps with Psychic Static, which is also more passive, but handy if there are any nosy telepaths around.

The Ur-Example and Trope Namer is a scene from the Star Wars film A New Hope (see examples below; it has a section for its own). Many examples elsewhere count as both a straight example of the trope and a Shout-Out to Star Wars; frequently the guy with those powers waves his hand and dictates the guards what to do, and they repeat those instructions as if hypnotized. Note, however, that parodies that do not work and should not have worked anyway (for example, because the guy doing it has no special powers) are not examples of this trope, only a Shout-Out to Star Wars. Help to prevent Trope Decay, and May the Farce Be with You.

Can be used to justify The Guards Must Be Crazy.

Not to be confused with the Philadelphia-based hip-hop group.

Taken from the original non-special edition.

Taken from the original non-special edition.