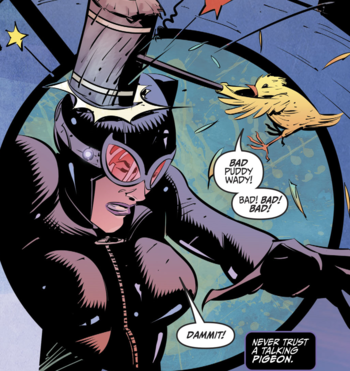 This is when a female character lacks the usual immunity to slapstick that comes with her sex and is thus regularly on the receiving end of physical comedy in a manner normally reserved for male characters. She might regularly suffer Amusing Injuries, get Covered in Gunge, receive a Pie in the Face, get Panty Shot for Comedic Underwear Exposure, and have other slapstick tropes done to her. She is usually the Butt-Monkey or The Chew Toy of the show and what happens to the girl is Played for Laughs.

It is more rare to see women in these roles because of the Double Standard seen in things like Beauty Is Never Tarnished, Wouldn't Hit a Girl, or Double Standard: Abuse, Female on Male. Also, due to all of these things, the women who do fit this trope are more likely to be amusingly injured by other women, their own clumsiness, or events beyond anybody's control than by men. On occasions when a male does comically harm a female, it will almost invariably by accident, and the woman will often retaliate by doling out some slapstick right back at the male, considerably more painful or over-the-top than what happened to her. A male character deliberately harming a female character is far less likely to be played for laughs than the other way around.

None of this is to suggest the men are getting away unscathed, by the way; if slapstick was only targeting the ladies then it would in fact know gender.

Exception: Instant Soprano always Knows Gender, except in blatant parodies of that trope.

Contrast is usually Immune to Slapstick.

In episode 11 ("In Short, It's Your Fault, Onee-san") Koyori challenges Hinata and Hana to a couple of the games they have at their school festival; it doesn't go well for her.

In episode 11 ("In Short, It's Your Fault, Onee-san") Koyori challenges Hinata and Hana to a couple of the games they have at their school festival; it doesn't go well for her.