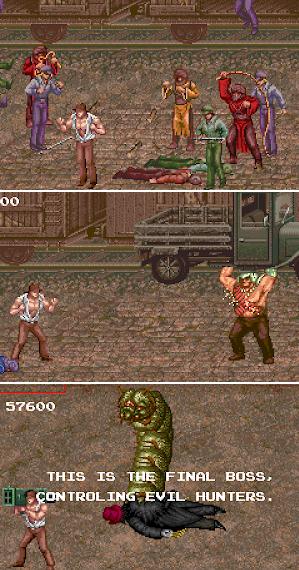 Poachers... poachers... more poachers...
GAH, WHERE DID THAT COME FROM!?!
"I'm guessing if Megatron's not the final boss, it's gotta be Galvatron, or maybe Unicron, or Fuckitron, who knows... oh, it's Mechagodzilla. Of course, I should've known."
— The Angry Video Game Nerd, reviewing

A Giant Space Flea from Nowhere is a boss with no relevance whatsoever to the actual plot, and who comes out of nowhere. They are frequently mindless creatures or beasts as opposed to actual characters, and tend to appear at the end of unimportant plot threads, such as Fetch Quests, but there are a few that do show up in the main quest, sometimes even as the Final Boss or a Post-Final Boss. In any case, do not expect the game to foreshadow or give proper answers about what the hell you are fighting right now.

Note that, contrary to what the name might at first seem to indicate, the Space Flea is not always an Eldritch Abomination, though overlap is possible. If it makes sense in the plot, it is not this regardless of how weird the boss might be. In other words, Lavos, Jenova and any other alien world-destroying parasites that are essential to the storyline of the game do not qualify, even if they're literal space fleas from the darkest depths of the universe. In more fantastical settings, they tend to be Single Specimen Species.

Also, note that most games that include Random Encounters, or that have no thematic consistency to their enemies, are incapable of having a Giant Space Flea from Nowhere. In those games, even the normal enemies appear suddenly and without any connection to the story; the bosses are therefore just a plain old instance of Gameplay and Story Segregation, same as the normal battles.

Sub-Trope of Lone Wolf Boss. Diabolus ex Nihilo is the non-video game equivalent: a bad guy who pops up out of the blue, does some damage, and dies. Contrast Outside-Context Problem, which is a villain (or other problem) whose indeterminate origin is the source of their mystery and danger. Sometimes explained with All There in the Manual, but that might be an Author's Saving Throw. As you can see, many a Bonus Boss is not included because they are technically a bonus boss and may even be outside of canon. Not necessarily related to Giant Enemy Crab, but it could be. Often they are also a Generic Doomsday Villain.

Also, compare the non-video game boss equivalent, the Big-Lipped Alligator Moment, which applies mostly to scripted scenes that came out of nowhere and have little or no mention of it afterward. If the boss and/or the battle is really weird and nonsensical even in the context of the game, there may be some overlap between the two tropes.

Works That Lampshade, Discuss, or Parody This (as long as it otherwise happens in video games)