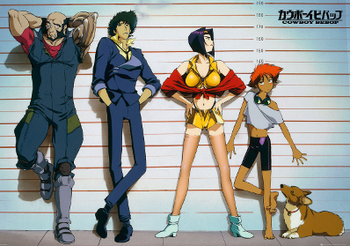 The main cast — Jet, Spike, Faye, Ed, Ein.
I think it's time we blow this scene, get everybody and the stuff together... okay, three, two, one, let's jam.
— Opening line of "Tank!", the opening theme

Immodestly billed as "the work which becomes [a] new genre itself", Cowboy Bebop (originally broadcast between April 1998 and March 1999 in Japan) is a Space Western/Film Noir anime series consisting of 26 episodes (and one movie) that eventually became one of the most popular, acclaimed, and influential anime series in history — justifying the braggadocio behind that tagline.

The series focuses on the misadventures of a ragtag group of five struggling to make a living as bounty hunters in the space-age frontier: Jet Black, a bounty hunter, former police officer, and owner of the spaceship Bebop; his partner Spike Spiegel, a martial artist on the run from a bloody past; Femme Fatale and rival bounty hunter Faye Valentine, who is both more and somehow less than she appears; demented teen genius hacker girl Edward Wong Hau Pepelu "Ed" Tivrusky IV; and Ein, a genetically-engineered Welsh Corgi "data dog".

The Bebop's crew faces dangerous criminals, occasional starvation, their own Dark and Troubled Pasts, and a particularly disgusting refrigerator over the course of the series. The show partially defines itself by the thematic choice to give everything a rich backstory yet explaining almost nothing in full. The stories told by the show concern themselves more with the problems of the present; in many cases, history is only implied, which leaves the rest to the viewer's imagination.

Another signature trait of Cowboy Bebop is its music: Yoko Kanno composed a soundtrack made up of almost entirely of jazz music. Some of her work on this show even defies categorization. She and her band, The Seatbelts, improvised some tracks to finished footage at the moment of recording. Bebop's soundtrack exists not as a mere afterthought, but as the backbone to nearly everything else about the series; numerous scenes eschew dialogue entirely and rely on music to carry the experience.

[adult swim] chose Bebop as the first anime to air on the block; the show debuted on the same night of the network's premiere in August 2001. Bebop aired regularly on the network for well over a decade after its American TV debut, which made it one of the network's longest-running shows. Toonami still has the rights to air the show, but if you cannot watch it on TV, you will have little trouble finding it elsewhere: Bandai released the show on DVD several times (including a remastered "Remix" version), and Funimation later rescued the license so it could re-release the show on DVD, Blu-ray, and digital video.

As the tagline suggests, Bebop frequently evokes both Westerns and Film Noir, though the single biggest influence on the look and feel of the series comes from '80s and early '90s Heroic Bloodshed action movies directed by John Woo (e.g. A Better Tomorrow and The Killer). Lupin III also serves as a visible influence, as the main trio comes off like a futuristic version of Lupin, Jigen, and Fujiko. Underneath the sci-fi and action flick surface lies an overall plot line influenced mainly by the most Japanese of all Japanese cinema, the Yakuza picture — a relatively unknown genre in the West.

A movie adaptation of the series, Cowboy Bebop: Knockin' on Heaven's Door (simply Cowboy Bebop: The Movie outside of Japan) was released in 2001. The movie's story takes place during the canonical events of the series; Word of God says it fits in between episodes 22 and 23 of the series. You can find the film on DVD, Blu-ray, and digital platforms with relative ease, as Sony Pictures never let it go out of print or fall into licensing hell.

Bebop also received two video game adaptations: a Star Fox-esque PlayStation game and a Beat 'em Up PlayStation 2 game (Serenade of Remembrance) based on the series. Though the latter, at least, was meant to, they never saw release outside of Japan, so if you want to find the scene from Cowboy BeBop at His Computer, you will have to import the PS2 game or watch a playthrough

. In 2019, the series made a surprising appearance in the Humongous Mecha crossover Turn-Based Strategy game Super Robot Wars T, which while also not released in the West, does have an English-language version for easy importing.

A Live-Action Adaptation has sat in Development Hell for years. Keanu Reeves once said that he would love to play the role of Spike Spiegel (at the very least, Reeves called himself a fan of the series), but because of the long wait for the adaptation to enter production, he has since decided to decline the role if it ever presents itself (mainly due to age).

In 2017, the adaptation has been reworked from film to a TV series co-produced by Sunrise

. In 2018, it was announced that Netflix has picked up the series for one 10-episode season.

Bebop creator Shinichiro Watanabe later created a spiritual successor in Samurai Champloo, then parodied his own work in Space Dandy. Carole & Tuesday is implied to be set in the same universe as Bebop.

A preview for the most disturbing episode of the show.

A preview for the most disturbing episode of the show.