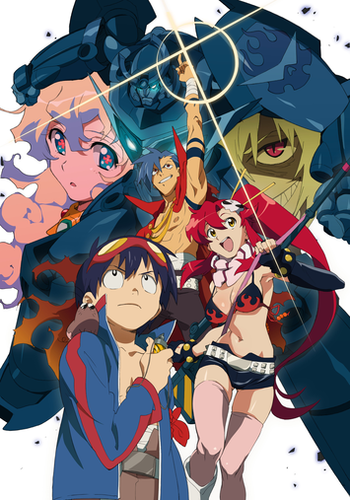 WHO THE HELL DO YOU THINK WE ARE?!
"Go beyond the impossible, and kick reason to the curb! That's how Team Gurren rolls!"
— Kamina
Advertisement:

Lonely orphan Simonnote pronounced "SHI-mon" in Japanese and "SEE-moan" in the English dub lives in an underground village, digging for ancient artifacts and eating pigmoles. His self-appointed big brother, Kamina, is a hot-headed badass who dreams of going to the "Surface" as his father did despite the village elder constantly saying the "Surface" doesn't exist. One fateful day, Simon discovers a strange drill-shaped key and, soon after, a pint-sized mecha which responds to the key. While taking an unapproved excursion to see it, Simon and Kamina are interrupted by the village elder... then by the roof of the village collapsing... then by a massive, bestial, robotic head... and then by Yoko, a young woman with a very big gun, and very little clothing, firing at said beast-mecha known as a "Gunmen".note Ganmen in Japanese, meaning "face".

Thus begins a roller coaster ride of Fanservice, over-the-top fight scenes between mecha, hot-bloodedness, epic sunglasses, massive badassery, and mind-blowing heroism. The show seldom takes itself seriously; it could be described as the exact polar opposite of Neon Genesis Evangelion, Gainax's other series about giant mecha.

The series also has a notable relationship with Getter Robo - being written by one of the editors of the original manga, and incorporating enough of its lingering plot threadsnote Most notably, the late-series moral conflict over whether humanity pursuing "the power of evolution" will cause them to destroy the universe that it can be seen as a pseudo-sequel to the unfinished Getter Robo Āḥ. This extends to its appearances in Super Robot Wars, where it's treated as an honorary Getter entry for the purpose of mechanics and roster (even being allowed to take Getter's place in the traditional Mazinger/Getter/Gundam "Holy Trinity").

There are two Compilation Movies with new scenes to help tie things together and provide movie-original climaxes: Gurren-hen ("Crimson Lotus Chapter", titled as Childhood's End outside of Japan) and Lagann-hen ("Spiral Stone Chapter", similarly titled The Lights in the Sky are Stars). There are also three manga: one is a slightly altered version of the anime, another is a High School A.U., and the third is set in an Alternate Universe focusing on Simon and Nia.

Gurren Lagann was originally licensed by ADV Films, but was later lifted from their license list and given to Bandai, whose DVD release of the series went out of print when that company went down, and currently rests in the hands of Aniplex of America. The English dub, under the title Gurren Lagann, first aired in America on Sci Fi Channel, then later aired on Viz Media's Neon Alley streaming service and Toonami. The entire series can be found on both Hulu

The sheer success of this anime led to the creation of Studio TRIGGER, a sort of spiritual successor to Studio Gainax.

Warning: Due to the series' massive popularity and Trope Overdosed nature, there are many unmarked spoilers below. If you have not watched it yet, you may wish to Archive Binge first.

These tropes are the tropes that shall pierce the Heavens!