Mega Man X | Main Character Index
Heroes (X) | Villains (Sigma) | Maverick Bosses | Supporting Cast
The major antagonists and villains of the X series. The majority are Reploids who are Mavericks and are organized according to game in which they are introduced.
open/close all folders

Mavericks are Reploids who rebel against humans and are a threat to them and other Reploids. The causes of a Reploid becoming a Maverick could be software bugs, viruses, reprogramming, by their own free will upon deciding that humans are inferior and too weak to live (or some variation of this thought), or even being judged so by the people in charge with varying degrees of justification or lack thereof. They are main antagonists of the series.
Sigma
Click here for tropes on him
Advertisement:
Vile (VAVA) 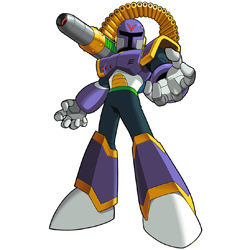 Voiced by: Mugihito (JP, X8, DiVE (Goliath boss)), Hiroshi Shimozaki (JP, Maverick Hunter X, DiVE (playable)), Roger Rhodes (ENG, X8, Maverick Hunter X), Lee Tockar (Mega Man animated series)
A former Maverick Hunter who was detained for use of excessive force, released by Sigma to act as his second in command during the events of X1 (or take on both X and Sigma in Maverick Hunter X). He is later revived by Dr. Doppler as "Vile MK-II" in X3 in order to defeat X. After a long absence from the series, he returns in X8 as "Vile V" to kidnap Lumine and spearhead the new-generation Reploid revolution. He can be distinguished by his use of Ride Armor, his shoulder cannon, and his Boba Fett-esque helmet. 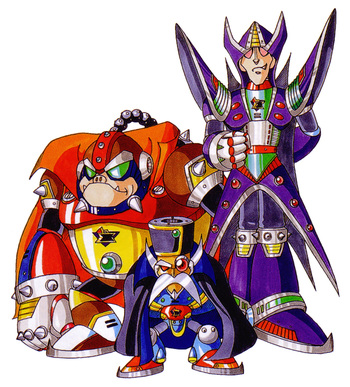 A trio of Mavericks who have dedicated themselves to defeating X, serving as the main antagonists in Mega Man X2. They challenge X to one-on-one duels with Zero's rebuilt body as the bait. The members are Agile, Serges (Sagesse), Violen, and χ-kai-.
Serges (Sagesse) 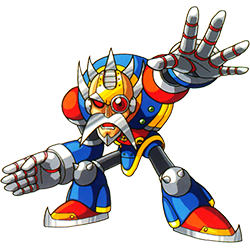 Serges is the head of the X-Hunters, acting as their resident scientist and being the smartest of the trio.
Agile 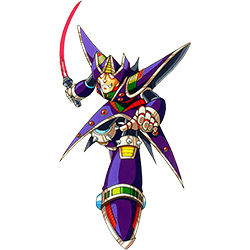 Agile is the strategist and the fastest of the group.
Advertisement:
Violen 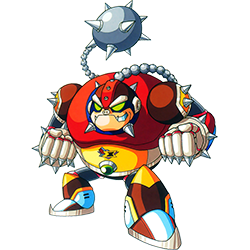 Violen is the enforcer and the strongest of the group.
χ-kai- 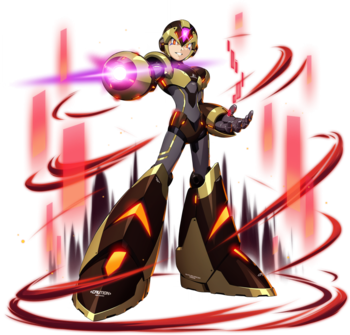 χ is the fourth X-Hunter that was introduced in Mega Man X DiVE. He is a Evil Knockoff that Dr. Wily built from X's stolen blueprints. However, Dr. Wily chose to give up the project due to the immense difficulty in the creation of a logic circuit for the prototype. Later on, Serges came by the unfinished prototype by chance. He re-initiated χ and had him join the X-Hunters. 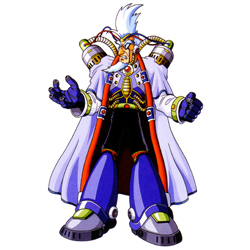 A Reploid scientist who is one of the main antagonists in Mega Man X3. He developed an anti-virus to the Maverick Virus, and the Mavericks he helped reform built a city called Dopple Town around his lab. However, the anti-virus turned out to be little more than a placebo: Doppler himself was infected by the Sigma Virus and had just formed an army under the world's noses. After his defeat, Doppler snaps out of it and reveals he resurrected Sigma. He then helps X delete the Sigma Virus, sacrificing himself in the process (depending on the player's actions).

In General
Made up of the fast Bit (Vajurilla FF) and the strong Byte (Mandarilla BB), the Nightmare Police were the law of Dopple Town before Doppler's rebellion. They are deployed to hunt down and capture X, dead or alive, so Doppler can use his body in Sigma's resurrection. During the final levels they combine to form the powerful Godkarmachine O Inary, but are destroyed nonetheless.
Advertisement:
Bit 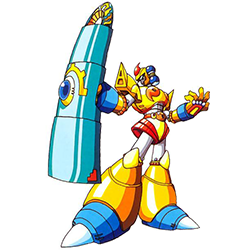 Bit is the smaller of the Nightmare Police, who directs the Maverick forces of Dopple Town. He was constructed with a balance of offense, defense, and speed in mind.
Byte 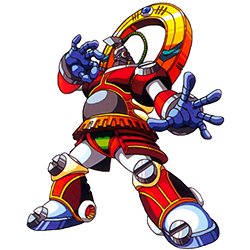 Byte is the larger of the Nightmare Police, built with a focus on raw fighting power.

In General
Repliforce is a military group formed by Dr. Cain as support for the Maverick Hunters due to the increase in Maverick incidents. They are lead by General along with his second in command; Colonel. During X4, they are framed by Sigma for the fall of the floating city Sky Lagoon, and refuse to give up their honor by disarming to the Maverick Hunters. This causes them to be labeled Maverick and they decide to hold a military coup and flee to the space station Final Weapon.
General 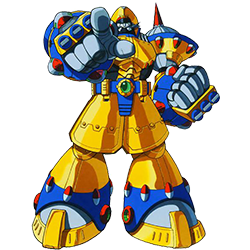 Voiced by: Ryūzaburō Ōtomo (JP), Mark Hagan (EN)
The leader of Repliforce. He is a massive Reploid who truly desires peace, but his paranoia of the Maverick Hunters leads him to jump the gun and stage a coup d'etat to form a Reploid-only nation in space.
Colonel 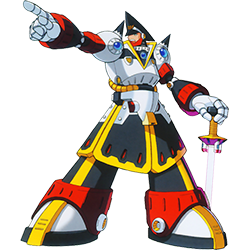 Voiced by: Jin Yamanoi (JP), Matthew Meersbergen (EN original dub), James Jordan (EN Redub)
A powerful Reploid who is the second-in-command of Repliforce. He is Iris' older brother and a friendly rival of Zero's. However, their relationship is strained when conflict breaks out between Repliforce and the Maverick Hunters.
Colonel's Sister (X4 spoilers) 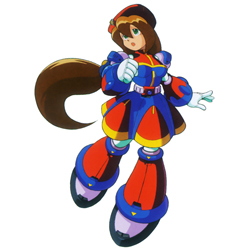 Voiced by: Yuko Mizutani (JP, Mega Man X4), Aya Endo (JP, Mega Man X DiVE) Michelle Gazepis (EN, original dub), Ashley Schroeder and Carol-Anne Day (EN, redub)
Introduced as Zero's girlfriend, Iris gets caught in the middle of the civil war between her brother, Colonel (fighting for Repliforce), and her lover (fighting for the Maverick Hunters). She initially helps Zero as his Mission Control and constantly wishes for the fighting to stop. She also appears in the chronologically earlier Xtreme 2/Soul Eraser and in a cameo appearance inside Zero's memories during X5.

After Zero retires her brother, she loses it and uses Colonel's chip to form a Ride Armor-like body around herself to attack Zero. He is forced to kill her in self-defense. With her body consumed by the destruction of Final Weapon (not to mention her mind already being damaged due to its incompatibility with her brother's specs), she is Deader Than Dead. 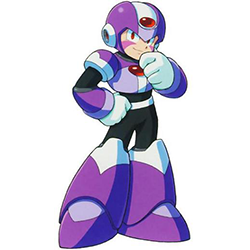 A Maverick hacker and one of the primary antagonists of Mega Man Xtreme. With the help of Shadow Hunters, Geemel and Zain, he hacks into the Maverick Hunters’ Mother Computer and sets it to cause chaos worldwide. It’s later revealed that he was corrupted by Sigma, who had him pull off the hack in a bid to crush the Maverick Hunters. He’s also the twin brother of Middy and shares the same CPU as him.

In General
A mysterious group formed of Geemel and Zain that helps Techno hack into the Mother Computer. Once X goes into cyberspace to fight back against the hack, the two digitize themselves to try to stop him. With Techno they serve as the primary antagonists of Mega Man Xtreme.
Zain 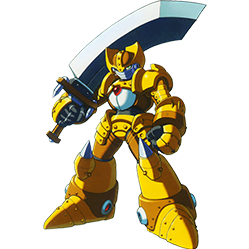 Zain is the heavy-armored one who wields a massive sword. He appears as a boss in Normal Mode.
Geemel 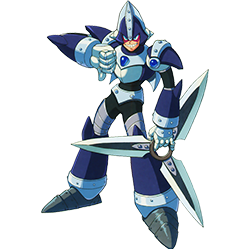 Geemel is the light-armored one who utilizes ninja abilities. After witnessing the death of Zain in Normal Mode, he takes his place as a boss in Hard Mode.

In General
A pair of Reploids named Berkana and Gareth that run the Reploid Research Laboratory on Laguz Island. They are the ones behind the Erasure Incident and serve as the primary antagonists of Mega Man Xtreme 2.
Berkana 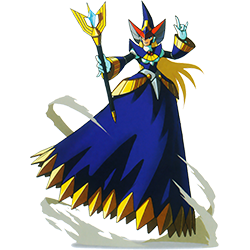 A wizard-styled Reploid who works with Reploid research and development. She is the perpetrator of the Erasure Incident, the creator of Gareth, and overall a power-hungry maniac.
Gareth 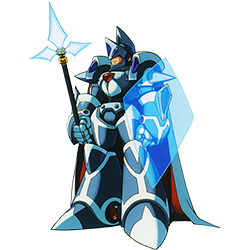 A knight-styled Reploid who serves as Berkana's right-hand-man. He's the first to welcome X and Zero to Laguz Island, and challenges them to face the resurrected Mavericks. 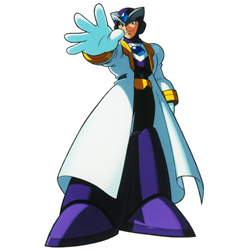 Voiced by: Keiji Fujiwara (JP)
An outcast Reploid engineering researcher, disavowed for his relentless ambition and dangerous methods. He gets infected by a part of Zero while inspecting the wreckage of the Eurasia colony. Driven insane by The Virus and the persecution of the scientific community, Gate resurrected seven of his retired creations (plus one old comrade) and teamed up with the enigmatic Isoc. Together they created an invincible Reploid named High Max, a reality-warping virus phenomenon called the Nightmare, and a discolored clone of Zero called the Zero Nightmare. The Nightmare and the "ghost of Zero" cause global chaos, pinning the blame on Zero, while Gate deploys the eight Nightmare Investigators to "investigate" the Nightmare and capture Zero for more data.
High Max (HI-MAX) 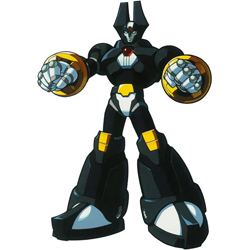 Voiced by: Norio Wakamoto (JP)
A nigh-invincible Reploid made by Gate using Zero's DNA. He's the leader of the Nightmare Investigators, and is tasked with gathering more Reploid volunteers to study the Nightmare Phenomenon and find Zero. Though difficult, defeating him in one of the eight secret arenas allows the player to skip right to the final stages in Gate's laboratory.
Isoc 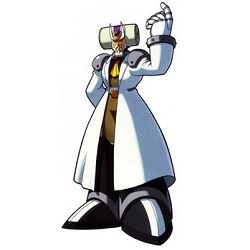 Voiced by: Takeshi Aono (JP)
A scientist employed by Gate to inform the public of the Zero Nightmare and the formation of the Nightmare Investigators. 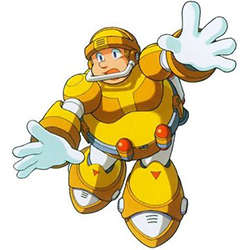 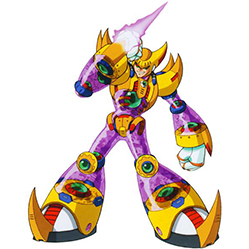 to see his true form.
Voiced by: Yasunori Matsumoto (JP), Jeremy Felton (EN)
Introduced as a rookie Hunter in X4, this little fat yellow Reploid acts as X's Mission Control and seems bumbling and harmless. Nevertheless he's loyal to X, assisting him in any way he can....until it is revealed that he was a Maverick working for Sigma all along (and possibly even against him too), with a much more sinister second form.
Dynamo 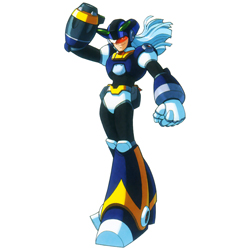 Voiced by: Showtaro Morikubo (JP)
A mercenary hired by Sigma during the events of X5 to spread the virus inside the space colony Eurasia, in order to destabilise its orbit. While the Hunters were racing against time to prevent this, Dynamo challenged them to fights in order to slow them down. He reappears in X6, this time on his own trying to increase his power by the use of Nightmare souls. He never makes a reappearance in later games.
Zero Nightmare 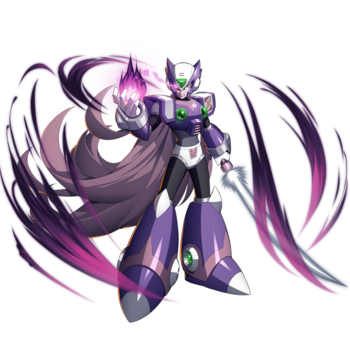 Voiced by: Ryotaro Okiayu
An insane clone of Zero created by Gate to cause havoc in areas being patrolled by his Nightmare Investigators. He is first encountered destroying the opening stage's Warmup Boss, and can later be fought in any of the main stages' secret areas.
Red 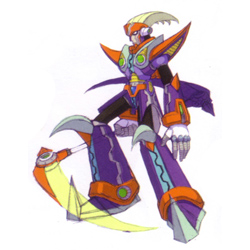 Voiced by: Akio Ōtsuka (JP), Barry Gjerde (EN)
Leader of the vigilante Maverick-hunting syndicate Red Alert, which formed to fill the power vaccuum left by X's retirement. Red was the one who first found Axl and put his shapeshifting abilities to work as an assassin. When Axl runs away from Red Alert and gets caught up with the Maverick Hunters, he personally challenges the Hunters for his return. It turns out this is due to the influence of Sigma, unsurprisingly.
The True Final Boss (X8 Spoilers) 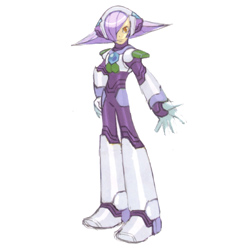 Voiced by: Junko Noda (JP), Elinor Holt (EN)
The overseer of the Jakob Project, a Space Elevator being constructed to allow mankind to colonize the Moon. Lumine is a New Generation Reploid, featuring the same Copy Chip present in Axl. He is kidnapped by Vile at the start of the game as part of Sigma's plans. After Sigma is defeated, Lumine reveals that he was secretly using Sigma as part of his plan to overcome not just humanity, but also all old generation Reploids as well.
Dr. Albert W. Wily (Massive Spoilers) 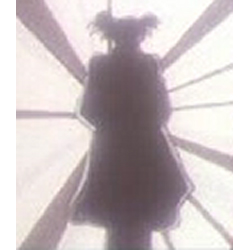 Voiced by: Takeshi Aono (JP), John O'Corner (ENG)
Thought to have been gone since the Classic series, the mad doctor himself seemingly takes a page out of Dr. Light's book, in that he actually might have cheated death. His influence throughout the entire conflict can still be felt with the Maverick Virus that he (possibly) created, and, of course, his masterpiece, Maverick Zero. His plans have reached its peak at the Series Fauxnale of the series, X5.