This page deals with the characters from the Mega Man Legends, including The Misadventures Of Tron Bonne.

Note that all spoilers are unmarked!

The main hero of the game. Mega Man works together with Roll as they investigate ruins as Diggers, Mega Man doing the adventuring while Roll provides info of what to do. His otherwise normal life (for this world, at least) is gradually dissolved, however, as the two games reveal his Mysterious Past. In reality, he is Mega Man Trigger, a Purifier Unit for the System, and his actions tie into the fate of the System, and the planet and its population.

Remember the first time you went on a dig, Mega Man? I wasn't used to being a Spotter... and you ended up getting lost underground for three days! Remember? We were lucky that Gramps came to help us... I don't know what I would've done if he hadn't been there...
Voiced by Tracy Ryan (English), Keiko Yokozawa (Japanese)

Mega Man's Spotter, in charge of building and maintaining his equipment. Years ago her parents went missing on a dig, and Roll hopes to find out what happened to them someday. In the meantime she provides Mega Man with advice on his missions and also pilots their airship, the Flutter.

Hi! My name's Data! But you already knew that, didn't you? I mean, we've been friends for years, right? Come talk to me if you want to save, ok?
Voiced by Ikue Otani (Japanese)

The crew's mascot found together with Mega Man. He has ever since tagged along with them. He's the storehouse for Mega Man's lost memories, holding all his knowledge of Elysium, the System, and his past. 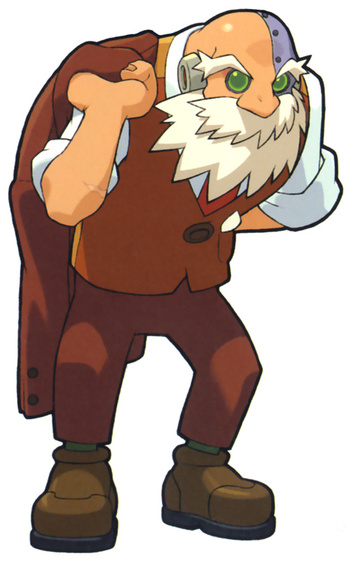 I've been in the digging business a long time, but I haven't been able to find out anything about this island's treasure except legends and myths...
Voiced by George Masswohl (English), Kenichi Ogata (Japanese)

Barrell Casket is Roll's grandfather and was an avid Digger in his days. He raised Roll and Mega Man.

The entire family
The Bonne family consists of big brother Teisel, sister Tron, baby brother Bon, and 41 Servbots built by Tron. As pirates they've made their living flying from island to island raiding and pillaging... until they come across Mega Man.
Teisel Bonne

I want another flawless operation, same as the last one! I swear, that treasure will be ours or my name's not Bonne! Let's DO IT!!
Voiced by Rob Smith (English), Tesshō Genda (Japanese) 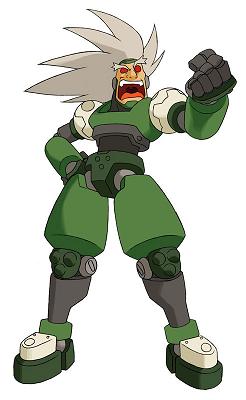 The leader of the Bonnes, he's always on the lookout to score some treasure. After what is initially just another job goes south due to Mega Man's interference, Teisel declares It's Personal and makes it his mission to someday defeat Mega Man no matter the cost.

Tron Bonne
How dare he! I'll teach him not to mess with me... or my kids!
Voiced by Caroly Larson/Tara Platt (MvC3) (English), Mayumi Iizuka (Japanese)

The Bonne Family's main engineer who builds all their robots. Due to Mega Man saving her from a dog, and just his general heroism, she eventually develops a crush on him. But family comes first, and even if she doesn't like it, she's still going to fight Mega Man to do right by them. She has her own title, The Misadventures of Tron Bonnne. 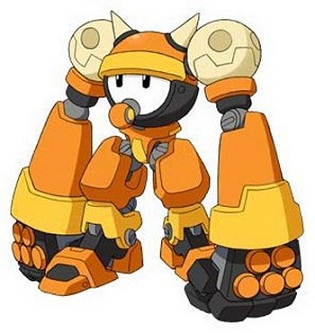 The youngest member of the Bonne Family, who only speaks in "Babuu." Despite being the kid of the family he has tremendous strength. 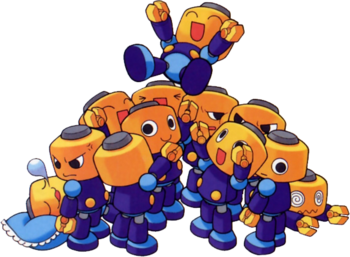 The adorable Bonne family minions, built by Tron. There's forty-one in total, and they pilot the family's robots and airships. This usually means they end up blown up and thrown around when Mega Man destroys that robot, after which they're usually yelled at by Tron. Even though they always go through hard times, they do their very best to make their mom (Tron) proud of them, which sadly happens very rarely.

I'm very, very, disappointed in all of you! You can't even capture a little island by yourselves!
Voiced by Michael Hall (English, The Misadventures of Tron Bonne), Toby Proctor (English, Legends 2), Takehito Koyasu (Japanese)

The self-proclaimed rival to the Bonne Family. Teisel is his main rival and both hate each other's guts. He's served by the Birdbots, his loyal bird-themed robotic minions.

A loan shark that eventually kidnaps both Teisel and Bon for a huge debt Teisel never paid him back. 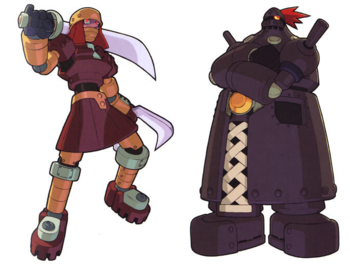 Bola on the left, Klaymoor on the right

Two pirates that are also after the Keys in Legends 2. Both of them claim to be old and past their prime, but are still very tough to take down.

An extremely devoted police officer who always has bad days during work. She tries really hard in bringing criminals to justice by all means necessary.

A man living on Calinca Island, he's determined to someday explore the nearby Forbidden Island. He has no memory of his past but lives comfortable on Calinca in spite of it.

The last true human alive, who lived in paradise on Elysium. Realizing the System that was sustaining him was wrong to support, he went to Terra to die peacefully and asked Mega Man to shut down the System.

Was it you who awoke me? It is somewhat earlier than I had planned...
Voiced by Jeff Mallory (English), Akira Ishida (Japanese) 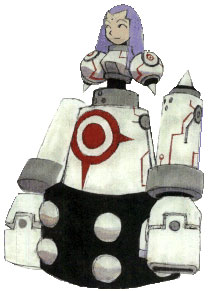 A Bureaucratic unit who rests beneath Kattelox Island within the Main Gate, he is awakened by Mega Man when he explores the gate. His function is to monitor the population of the island, and when it is judged to have grown too large, he "reinitializes" it — meaning killing everyone.

A mysterious girl found at Forbidden Island inside stasis who helps the Diggers to uncover the mystery of the Mother Lode, guiding them to find the Keys to find the ancient technology. However, the Mother Lode is not what they think; the Keys Sera is directing them to are needed for her to activate Elysium's Carbon Reinitialization Program, which would wipe out the populace on earth. 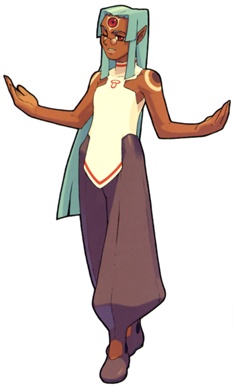 A mysterious man who was found alongside Sera on Forbidden Island, he's the Servitor unit for her, thus her bodyguard and attendant. 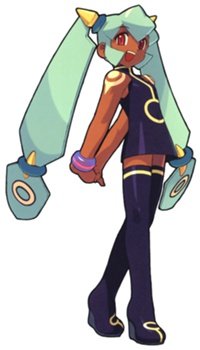 A mysterious woman watching over Sera on the Forbidden Island. She is the Mother unit overseeing Terra, and sealed Sera and Mega Man in stasis years ago. Guarding the Forbidden Island from outsiders, she saved Roll's mother Matilda years ago, but due to expending so much of her energy to do so, she took up residence in Matilda's body while her own recovered.

Yuna's Servitor unit, and as such her personal bodyguard and attendant. 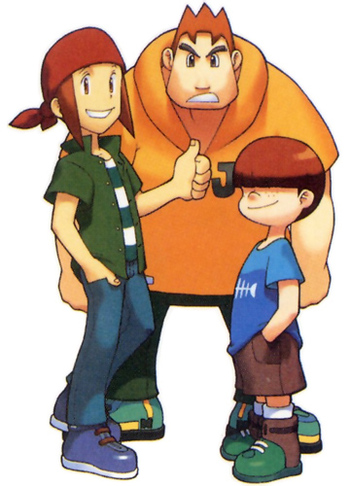 A trio of rascals that lives in Downtown. They were the first to notice something fishy about strangers around the city and tried to warn the police about them, but no one believed the gang. 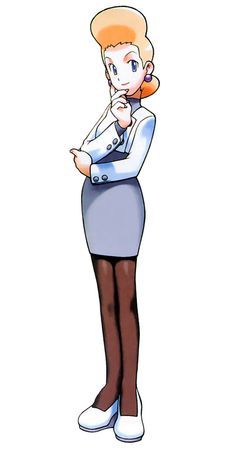 The mayor of the city in Kattelox island who tries hard to keep the citizens safe. She is a professor of ancient civilizations, and used to be Barrell Caskett's assistant while she was in school. After receiving help from Mega Man, she issues licenses for him to enter the ruins and investigate the cause of Reaverbots' recent acting up.

A dog that belongs to Jim's sister. Jim orders him to chase after Tron Bonne, who's then rescued by Mega Man Volnutt.

A young girl in the Uptown hospital confined to a wheelchair, unable to walk.

The owner of a boat house in Uptown, who had his boats stolen by the Bonne Family just before Mega Man came to Kattelox Island.

A lady who owns the museum of Uptown. Her dream is making her collection one of the best in the world.

A young researcher who wants to solve the mysteries of Kattelox Island. He appears around the island over the course of your playthrough.
Mega Man Legends 2

The owner of the bar in Yosyonke City, living together with her daughter. She found Joe hurt and without memories 10 years before the events of Mega Man Legends 2, and took care of him since.

A girl living in the Kito Village on Calbania Island. One day, she was kidnapped and held as hostage by Birdbots, but rescued safely thanks to Mega Man.

Shu's little twin brothers, they asked Mega Man to save her when he came to the island to destroy Glyde's base.