Heroes of the Lance 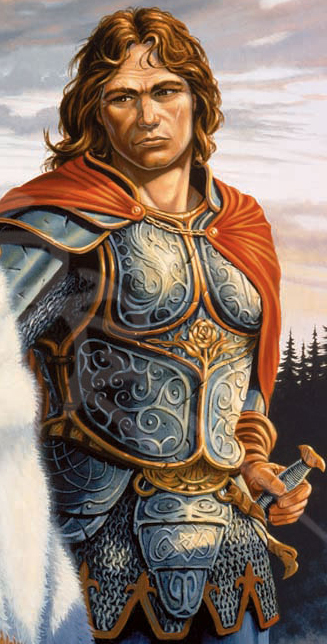 Raistlin's twin brother and self-appointed protector. Caramon is strong yet a little slow (but not stupid) in contrast to his brilliant but frail twin. Caramon is loyal to a fault to his brother and frequently puts himself in harm's way to protect Raistlin; his main story arc throughout the series is learning to step out from Raistlin's shadow and see his twin as he really is. Caramon is in love with Tika Waylan, whom he marries; Palin Majere (see below) is their son. 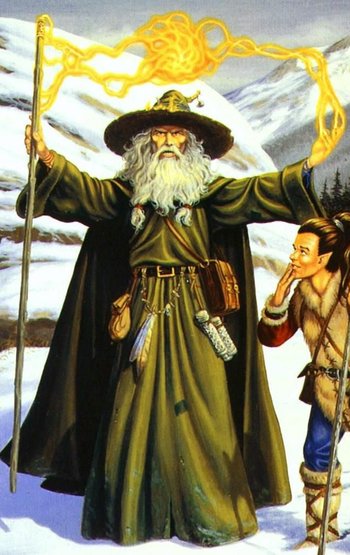 A scatter-brained old wizard who repeatedly runs into the Companions and frequently gets them into trouble, only to get them out of it again seemingly by accident. His meddling often leads them down just the right path they needed to take, but whether it's intentional or not is unclear. He and Tasslehoff become good friends. 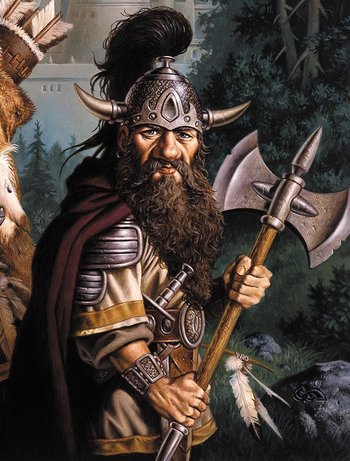 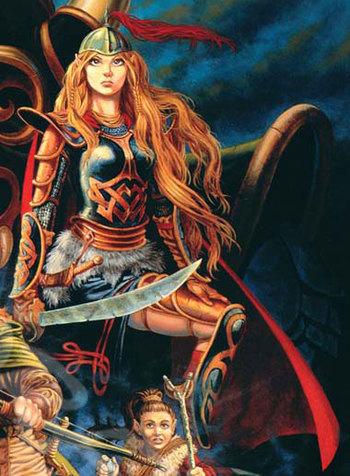 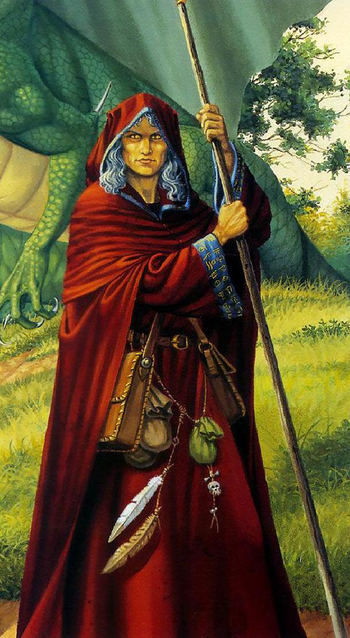 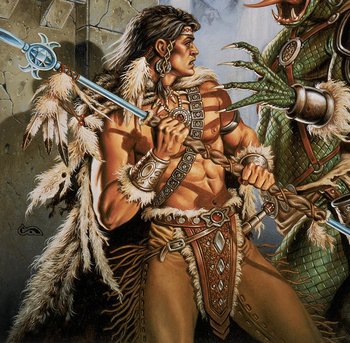 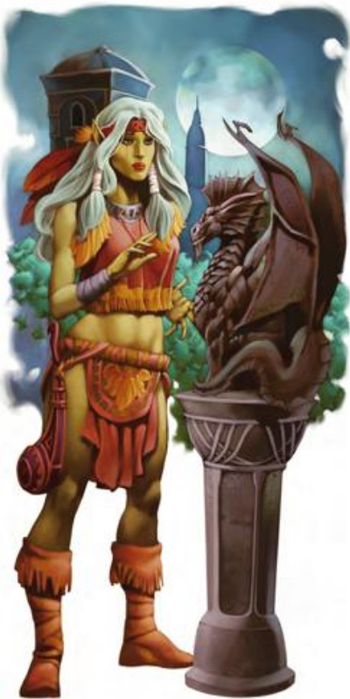 A half-elf warrior and the de facto leader of the Companions. Son of an elven noblewoman who was raped by a human warrior, Tanis is torn between his two heritages, as well as between the human woman Kitiara and the elf princess Laurana. Flint acts as a surrogate father to him.

Servants of the Dark Queen 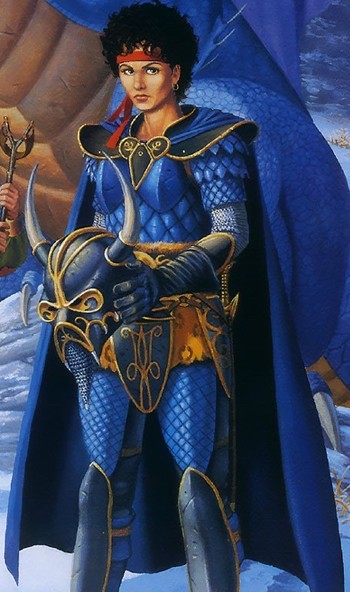 A mysterious female warrior who rides a blue dragon and serves in the armies of Takhisis in the War of the Lance. It turns out that she is really Caramon & Raistlin's older half-sister, who abandoned the group during their time of separate adventuring and signed up with the forces of darkness for wealth and power. Ultimately, she takes the title of Highlord of the Dragonarmies after Ariakas's death, only to perish during the battle of Palanthas at the end of Legends. 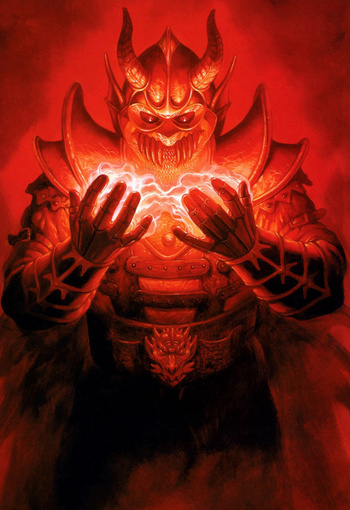 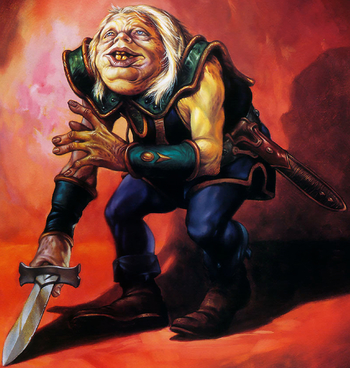 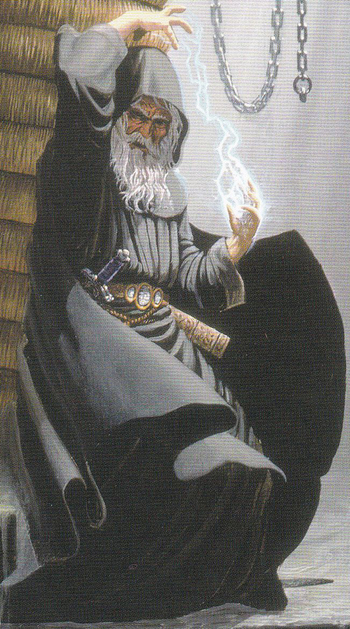 A legendary evil wizard from before the Cataclysm. 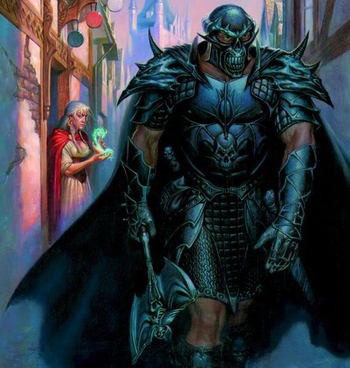 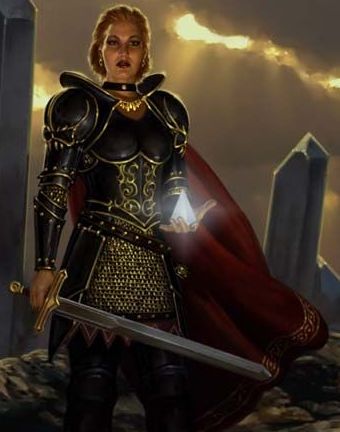 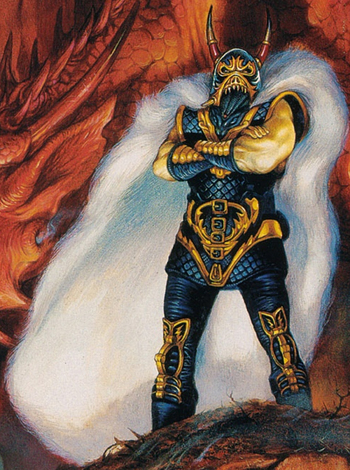 A Dragon Highlord and a devout worshipper of Takhisis, he is one of the first major foes that the Heroes of the Lance must overcome in order to thwart Takhisis' plots to conquer Krynn with her armies. 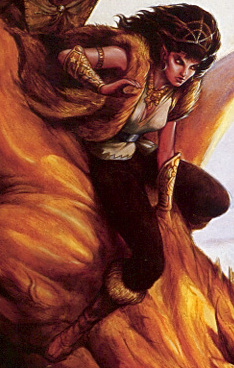 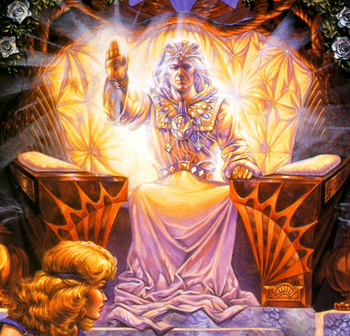 The ruler of the theocratic empire of Istar, and the man directly responsible for the world-ruining Cataclysm. Although the mightiest cleric to ever walk the surface of Krynn, his drive to do good spiraled into an obsessive paranoid fear of evil, leading to him corrupting the empire into a place of such self-righteous wickedness and blasphemy that the gods united to crush the city under a massive meteor.

A gully dwarf medicine woman from the lost city of Xak Tsaroth, she becomes instrumental to helping the Heroes of the Lance succeed in the original trilogy. 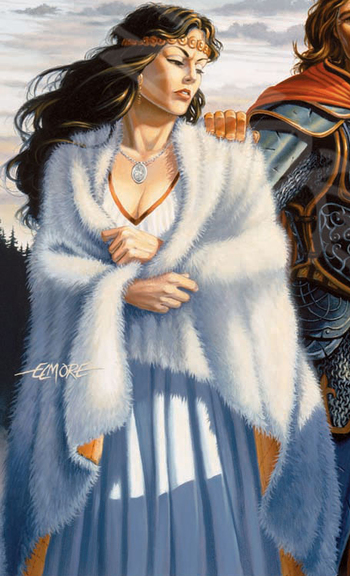 A noble's daughter turned priestess of Paladine, she kicks off the Legends trilogy by approaching Caramon for help in meeting Raistlin; having received visions of Raistlin's plans to challenge Takhisis, she believes she can sway him from these goals, only to end up enamored with him and falling under his spell. 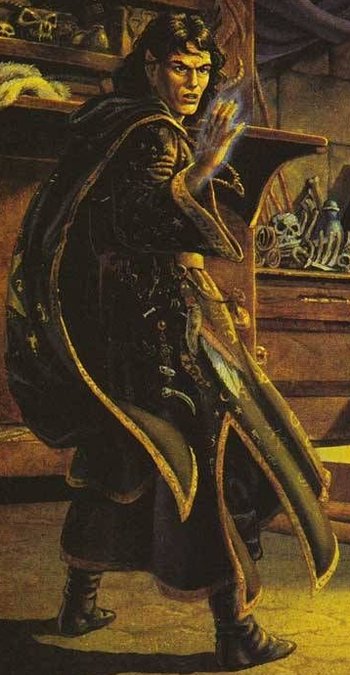 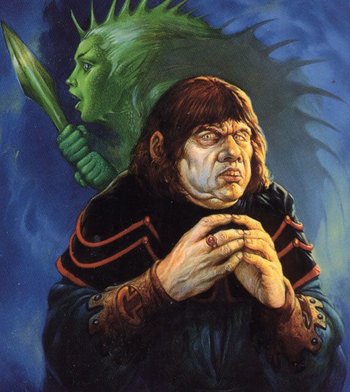 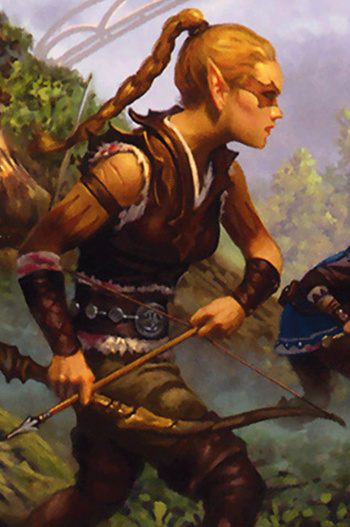 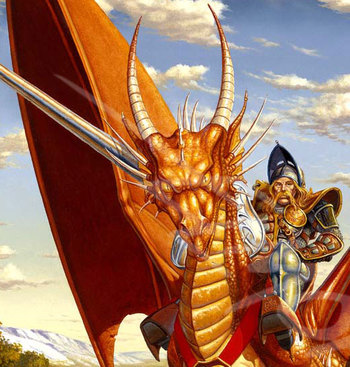 The most notorious Death Knight in all of Krynn, and perhaps the first of his kind to darken that world, Lord Soth was once a noble Solamnic Knight of the Rose who ruled justly from his home of Dargaard Keep in the time of the Kingpriest. One day, he and his loyal warriors rescued a band of elven priestesses from ogre bandits, and Soth fell in love with the youngest and most beautiful of them. The two of them gave in to their desires, and Soth, consumed by lust, arranged for his seneschal to murder his former wife. His former spouse's death aroused suspicions, and Soth was jailed; when his lover's fellow priestesses came forth and revealed his indiscretions with the now-pregnant priestess, Soth's honor was forever soiled. His lover and loyal men freed him from his prison before he could be executed and returned him to his home, where he was beseiged. Eventually, with the aid of his wife's prayers, he was contacted by Paladine and forewarned of the coming Cataclysm, and offered the chance to redeem his honor by thwarting the Kingpriest's blasphemy. Unfortunately for the world, the same priestesses intercepted him and convinced him to turn from his quest by making claims of his wife's infidelity. For this, the world burned, a conflagration in which he let his wife and newborn son die, and Soth became a Death Knight. He refused to fight in Takhisis' War of the Lance until Kitiara impressed him by accepting his challenge to spend the night in his haunted castle; eventually, he became infatuated with her, and during her reign as Highlord, he ultimately manipulated her into a war against Palanthas that ended with her death, because he hoped to make her into his undead bride. The story diverges there, with the games stating that he eventually became a temporary Darklord in Ravenloft but the novels insisting it never happened, until ultimately he was destroyed by Takhisis.

The son of Caramon and Tika, Palin was the only one of his father's children to inherit his grandmother and uncle's propensity for magical powers. Though his father initially tried to fight it, eventually, he gave in and accepted Palin's destiny to become a mighty wizard. When the Fifth Age dawned and the old ways of magic were lost, Palin led the way in rediscovering magic from the time before the gods of the moons founded the arts of High Sorcery.

Bastard son of Sturm Brightblade and Kitiara uth Matar, conceived without the knowledge of his father, who never knew who he was growing up. 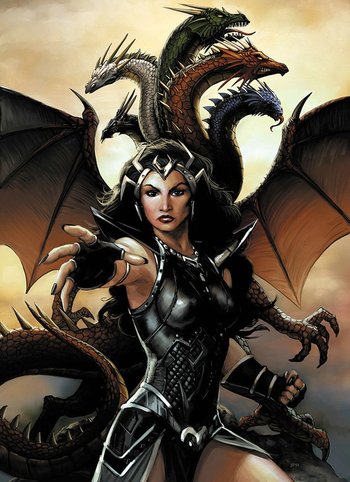 Clerics
Mystics
Mysticism is often called the "Power of the Heart", but it can really be called the ambient energy of all life. Mysticism was discovered after the Chaos War by Goldmoon. Mysticism, unlike Primal Sorcery, was nearly unheard of, as it had possibly never been used before the Fifth Age. Mysticism draws upon the energy in all living things. The discovery of Mysticism was a great boon, as Mystical magic could heal and cure disease, something that had been lost after the gods left at the end of the Chaos War. Mysticism was introduced in the Dragonlance SAGA game system, and could only affect living or once-living matter. So, there could be Mystics who could, heal, manipulate plants and animals, or create undead creatures, but they could not create a fireball.
Primal Sorcerers
The magic called Primal Sorcery is actually one of the oldest forms of magic that as always been around on Krynn. Primal Sorcery was the magic that was used before the Three Moon Gods took their places in the sky. The practice of Primal Sorcery fell out of use because the Moon Gods believed it to be dangerous after three sorcerers accidentally caused magical storms that devastated Ansalon when they defeated an army of Dragons during the Second Dragonwar. The moon gods taught the three sorcerers High Sorcery. Primal Sorcery was re-discovered after the Chaos War when all of the gods left. Primal Sorcery was introduced in the Dragonlance SAGA Fifth Age game system. Primal Sorcerers in the SAGA system could only manipulate non-living matter, so they could create fireballs, tidal waves, or tornadoes, but they could not heal anyone or create undead creatures.
Wizards

A species of Super Soldiers engineered by Takhisis in the War of the Lance, they are essentially Krynn's version of orcs, despite being a race of highly regimented and disciplined Draconic Humanoids. The original draconians were mutated from the unhatched offspring of metallic dragons, resulting in what were supposed to be innately evil reptilians; ironically, after the War of the Lance, experiments would be conducted on chromatic dragon eggs that would lead to breeds of innately good draconian.

Formerly humans who labored for Reorx during the Time of Myth, Reorx cursed their ancestors for being dissatisfactory, turning them into the first gnomes; some of these gnomes were then exposed to the Graygem of Chaos, becoming the first dwarves. At least, that's the story humans tell; dwarves claim they were the ultimate creation of Reorx and other species came about by trial and error. They are divided into four seperate species, which subdivide into assorted clans; Mountain Dwarves live in high mountains and spend most of their life underground mining, whilst Hill Dwarves live in lower hills and are predominantly surface-bound in their lives, whilst Dark Dwarves live exclusively underground and Gully Dwarves are the unwanted bastardization of the race spawned of dwarf/gnome interbreeding.

Elves
Cultural Posturing: Elves do a lot of this. Ironically, despite being created by the Gods of Good, they really haven't achieved much, if anything, to actually deserve it. In fact, given the Kingpriest was secretly being goaded on/supported by elven bigots who saw him as a useful tool to wipe out all the races they deemed unworthy (including both Obviously Evil ones like ogres, but also "ugly" ones like minotaurs and dwarves), one could say the elves don't deserve any accolades at all.
Goblinoids
Gnomes

Formerly humans who labored for Reorx during the Time of Myth, Reorx cursed their ancestors for being dissatisfactory, turning them into the first gnomes and giving them both a compulsion to pursue technology and the inability to use it properly. They are the ancestors of dwarves and kender, as both races mutated from gnomes exposed to the Graygem of Chaos.

The original form of the Ogres, back when the world was young. Though most of them fell into corruption and degenerated in all areas, a small handful kept onto their purity and survived.

The Krynnish equivalent of halflings. Like the dwarves, they descended from gnomes who were exposed to the energies of the Graygem of Chaos.

In the Age of Myth, the gods of evil created the beautiful Irda, but when the Irda's evil caused the race to embrace corruption, the gods of good punished them, destroying their empire and stripping them of their beauty and magical power, leaving behind only twisted and ugly giants in their place.