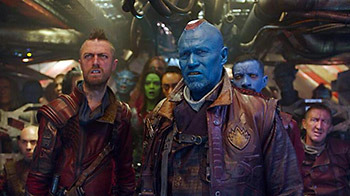 "Steal from everyone."
"Wait, wait. You ARE a rag-tag group of adventurers with unclear goals and good hearts, right? ...yeah, you people are my LARGEST threat."
— Galgarion, RPG World

This mission is important. The fate of the battle, nay, the war, nay, the entire world rests on the outcome. Who has the capability to stick it out, to give the good guys the victory they desperately need? This calls for a special team. The group of experienced, highly skilled, professional, team-oriented experts? Not them. The assorted group of ex-con lowlife inexperienced jerkasses who are trying to off their commander when they aren't going at each other? Yeah, them.