All spoilers for the first 159 chapters, as well as Grey and Nero's entries regarding their true appearances, are left unmarked. You Have Been Warned! 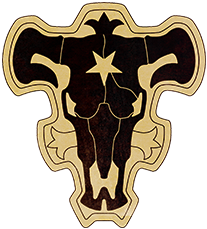 Led by Yami Sukehiro, the Black Bulls are one of the nine squads of Magic Knights in the Clover Kingdom. They are infamous for their destructive behavior and trouble-making, and is regarded as the worst of the squads. 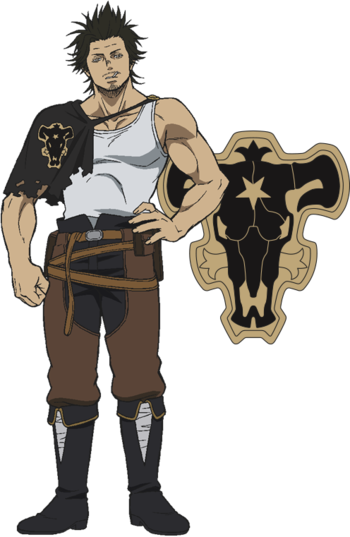 The Captain of the Black Bulls. A foreigner from an eastern country, Yami is a rough man with strange ways of leadership who's reliable in an emergency.

Yami uses Dark Magic, which can cover his blade in darkness to launch black crescent-shaped blasts or suck magical attacks into a black hole. He uses it in combination with his ki sensing to fight.

Asta
See his entry on his page.
Noelle Silva
See her entry on the Main Characters page.
Finral Roulacase 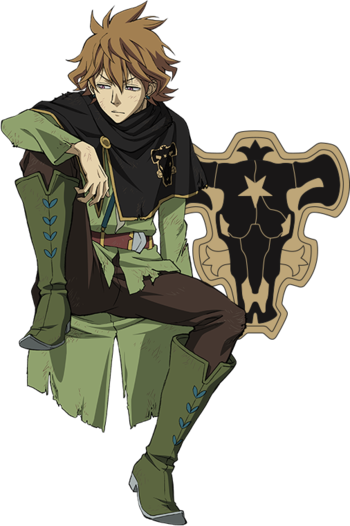 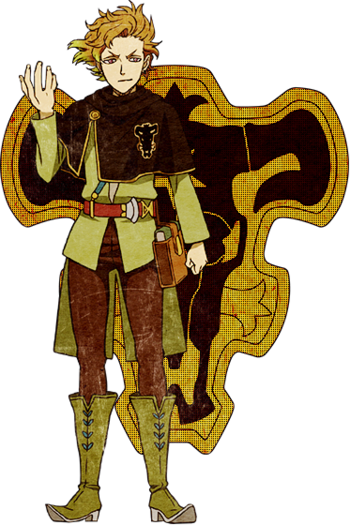 A casanova who was disowned from the high-ranking noble Vaude family that likes to hit on women whenever he has the chance to. Despite that, he is still one of the most level-headed and less explosive members of the Black Bulls, resulting in him having quite a bit of responsibility.

Uses Spatial Magic to create portals for transportation. However, he is inept at using it offensively and dislikes fighting. 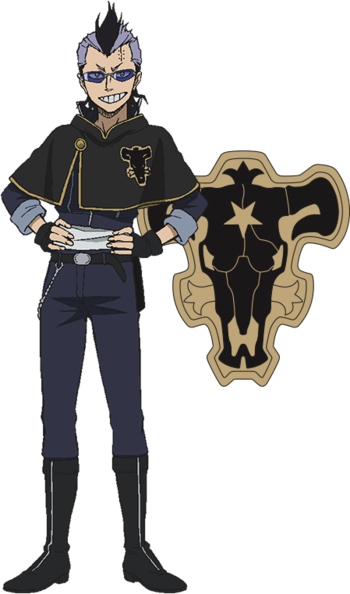 A loud mouthed Magic Knight with the looks of a delinquent. He was indeed a former delinquent that joined the Magic Knights once he was inspired by the mayor of his village and is a much nicer guy once one proves their worth. 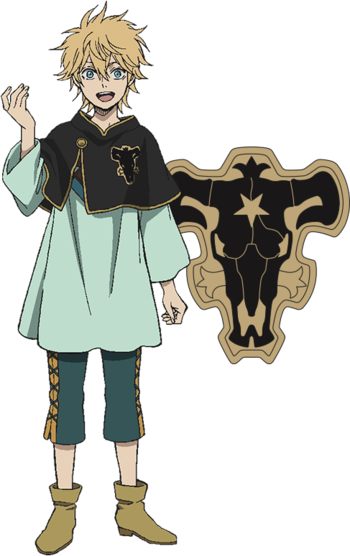 The Cheery Berserker
"As long as I get to fight tough guys, I'm good!♪"

An upbeat and friendly boy eager for strong opponents to fight with, and capable of great magical feats and magic sensing. He was brought up by his mother to always win and become strong. 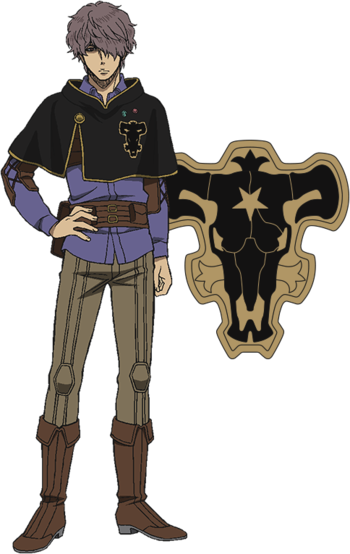 Sister-Complex Thug
"You're all I need, Marie!! What do I care about other people?!"

A man obsessed with his little sister and whose primary objective is to dedicate himself to her. He was born to the noble Adlai family but was cast out after his parents' deaths. Thus, he became a violent, vulgar ex-criminal who has a very hard time working with his fellow knights.

Uses Mirror Magic, being capable of firing lasers by reflecting light, and duplicating someone, most often himself. 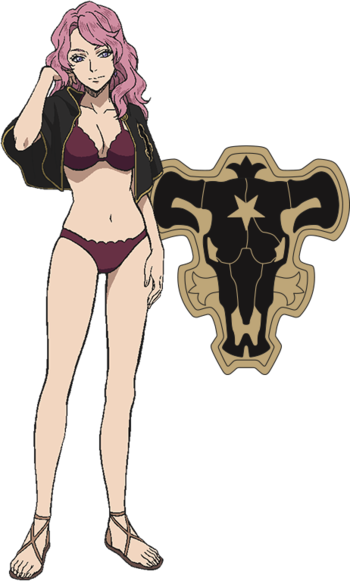 Booze-Loving Witch
"The greatest witch genius since the founding of the country of witches has returned!!"

Vanessa is a Magic Knight that loves drinking and has a penchant for hitting on and seducing men she finds attractive. Aside from that, she is a skilled mage and a cool and friendly woman who likes to help newcomers. She is originally from the Forest of Witches, but after meeting Yami she left against the wishes of the Witch Queen.

She uses Thread Magic, a magic able to manipulate threads to make clothes or objects, and even change the thread of fate itself. 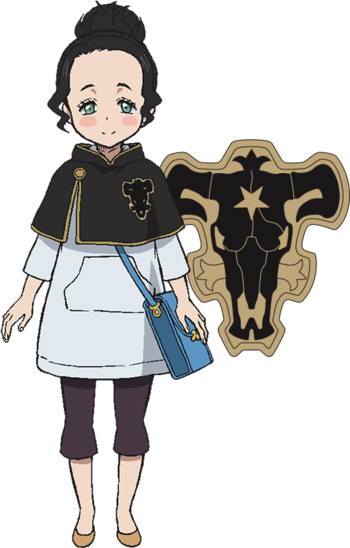 Perpetual Glutton
"I don't care who they are—Nobody touches my food!"

A quirky and friendly girl with a love for eating nearly obscene amounts of food like it's nothing. Usually harmless, keeping her from eating or stealing/destroying her food causes her to go absolutely ballistic.

Uses Cotton Magic, a type of magic that allows her to create cotton which can form fluffy sheep. She later manifests Food Magic, forming a giant wolf for her to eat other magic and use the eaten mana with hers to unleash magically reinforced punches. 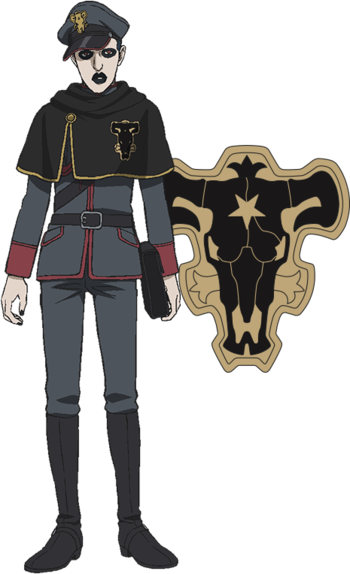 Hex Magic Expert
"I want to hurry and make friends with everybody too."

An odd man who wears all black and constantly mumbles to himself. Despite his creepy appearance and mannerisms, he's actually a very friendly person.

He uses Poison Magic to form poisonous masses which have the additional effects of hexes. 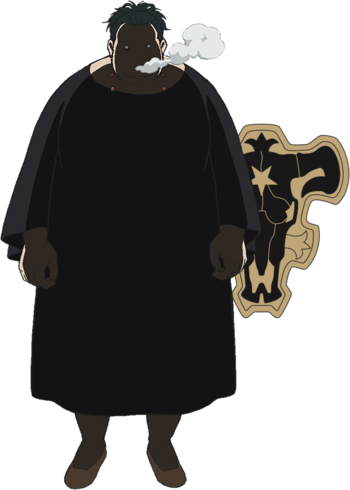 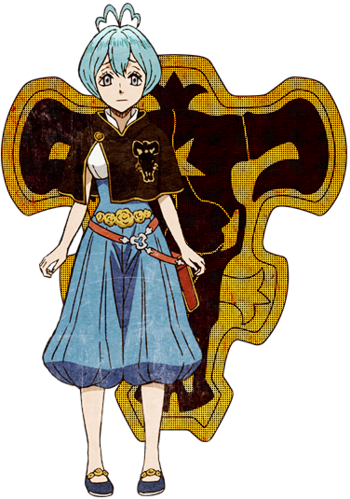 A seemingly huge man whose true appearance is concealed. In truth, she's an extremely shy woman who is constantly embarrassed in her true appearance.

A master of Transformation Magic, able to shapeshift into anyone and transform other objects as well, including the magic of others. 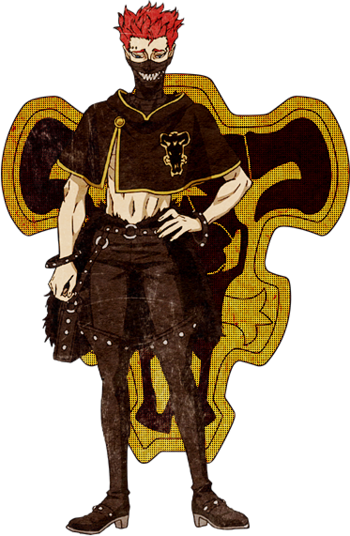 A mysterious and eccentric man who comes into the Royal Knight Tournament unannounced. Zora has dedicated himself to punishing corrupt Magic Knights due to his father's death. He enjoys playing pranks on others and getting under people's skin, but actually has great observation and analytical skill.

Uses Ash Magic in conjunction with Trap Magic, being capable of drawing magic symbols that unleash a variety of traps when triggered. Never confronts his enemies directly, preferring to befuddle them and trick them into defeating themselves. 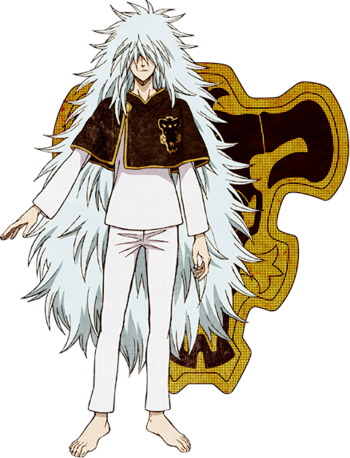 "If you hurt my friends, I will never forgive you."

The true owner of the Black Bulls' hideout who is confined to the squad's headquarters because his illness requires him to siphon magic from living beings. Henry is laidback and speaks slowly. He has secretly been watching over the Black Bulls and been mistaken as a ghost living in the hideout.

His Recombination Magic can restructure the Black Bulls' hideout to his liking. 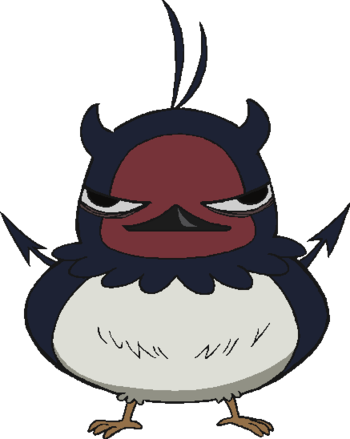 "The ones you looked down on and stepped on and toyed with are going to defeat you today!!"

An anti-bird that has taken a liking to Asta. In truth, she's the bird form of Secré Swallowtail, a servant of the First Wizard King who has spent centuries as a bird after the massacre of the elves.

She uses Sealing Magic, an ancient magic that has been affected by her use of Forbidden Magic, allowing her to seal and unseal objects, individuals, and even damage.

A yet to be revealed member of the Black Bulls who is serving as a spy in the Spade Kingdom.