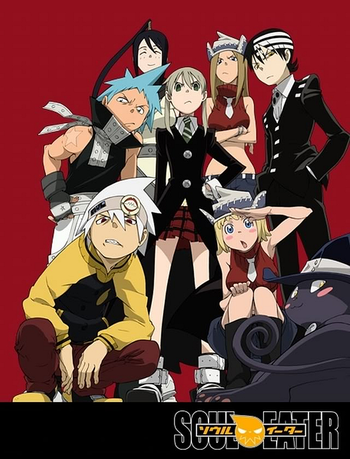 Soul Eater is a Shōnen manga by Atsushi Ohkubo which was serialized in Monthly Shōnen Gangan from 2004 to 2013, with a total of 113 chapters. It received a 51 episode anime by Studio Bones in 2008. As of January 2011, Monthly Shonen Gangan has run a prequel/Spin-Off titled Soul Eater Not! by the same mangaka, running alongside the original series while covering and expanding on events prior to the original story.

In the world of Soul Eater, a human soul that falls to corruption has a chance of transforming into a "Demon Egg", which in turn has a chance of hatching into the ultimate avatar of madness.

To stop this from happening, Death himself has set up the Death Weapon Meister Academy in Death City, Nevada. The DWMA trains warriors ("Meisters") and Weapons (humans who can shapeshift into weapons) to fight and retrieve the evil souls before they become Demon Eggs. A Meister and Weapon who manage to collect 99 corrupt souls and one Witch soul receive the highest honor: the Weapon becomes one of the Death Scythes, servitors of Death himself.

The series is basically what happens when the plots of Shaman King and Harry Potter are pulsed together in a blender, Studio BONES is put in charge of the animation, and what appears to be the world's craziest graffiti artist and world's biggest Tim Burton fan is hired as animation director. It should be noted that, since the manga was still being published monthly when the anime aired, the anime starts to deviate from the source manga after about the first third of the series and pretty much creates its own climax and ending.

The anime was acquired by Funimation, with tantalizing previews on their website. All of the episodes are viewable on their video portal

(which is only viewable... In America...and Canada) and their YouTube channel.

The series used to air on US television on Toonami on Saturday nights at 1:30 AM Eastern.

See also Fire Force, another series made by Ohkubo that's a prequel to this series.

Notably, the character of Eibon and the Book of Eibon are both borrowed from the works of Clark Ashton Smith. Smith was a friend and contemporary of H. P. Lovecraft; his works are filled with Shout Outs to the Cthulhu Mythos and debatably comprise part of them. The influence of the mythos on Soul Eater can be seen in the series' focus on madness, power, and godhood, especially portraying madness as something akin to an infectious disease.

Not to be confused with another Soul Eater, nor the literal kind.

open/close all folders
A-L
I'M HUMAN! IT DOESN'T MEAN I'M WEAK! THINGS AREN'T ALWAYS AS YOU THINK THEM TO BE!!
M-Z
"Would you like to fall into the madness?"
Feedback

Example of:
Throw the Book at Them