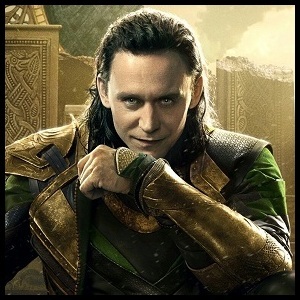 "I am Loki...of Asgard. And I am burdened with glorious purpose."

"You'll always be the God of Mischief, but you could be more."
— Thor to Loki

The Norse God of Mischief and Lies, and Thor's younger brother. A smooth talker, Master of Illusion and skilled knife-fighter, Loki spent centuries adventuring at Thor's side, but felt painfully overshadowed growing up next to the ideal warrior.

On the day of Thor's coronation, Loki helps several Frost Giants sneak into Asgard's vault for "a bit of fun." This leads to the discovery that Loki is himself an undersized Jötunn, adopted and placed under a glamour. With his sense of self shaken to the core, Loki becomes increasingly desperate to gain the love — or worship — he feels he is owed, even if he has to wreak havoc across the Nine Realms to get it.

The Tragedy of Loki of Asgard

Loki (as Odin) creates a play and statue to honor himself.

Example of:
Her Code Name Was "Mary Sue"

The Tragedy of Loki of Asgard

Loki (as Odin) creates a play and statue to honor himself.