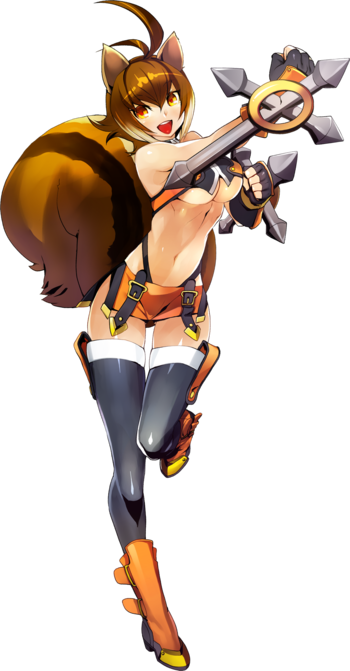 A girl of many assets. * Eyes up and front, damn it.
Profile

Voiced by: Tomomi Isomura (Japanese) / Cindy Robinson (English)
A fellow classmate of Noel, Jin and Tsubaki from the Academy. She entered the Academy for the financial benefit NOL provided to her family. She's a Squirrel Beastkin, giving her incredible physical strength and reflexes. Unfortunately, because of her squirrel-ness she was the victim of extreme Fantastic Racism from many others, including her classmates. Noel and Tsubaki protected her from them, and became fast friends. Responds with great Squee! to anything cute, including Taokaka and Noel in one of the "Teach Me, Miss Litchi!" skits, and Carl in a flashback in Noel's story mode. She ends up in the Intelligence Department of the NOL (the same division as Hazama). She wields a pair of tonfas and wears next-to-nothing.

Her Arcade mode playthroughs are named, in second and third game respectively: friendship and Bonds. Her story mode playthrough in the second game is named Slight hope.
Her Drive, Impact, charges a meter that when released performs an attack of damage equivalent to the meter (think playing those old-school golf games which require proper timing for maximum efficiency). In Chronophantasma, her Overdrive is Galaxia Impact, which automatically makes all of her Drive attacks Level G, augmenting their damage and granting additional properties.
In the fourth game, her Exceed Accel Cygnus Combination has her stun the foe with a punch to the gut. She then proceeds to do several of her specials, ending with her doing a powerful punch (or two) with a fist aura following her. Her Astral

, Planet Crusher, propels her forward with a dashing gut punch, followed by some Rapid-Fire Fisticuffs that would make Kenshiro and Jotaro proud, and finally uppercutting her opponent all the way to the Moon causing it to break apart into several pieces.