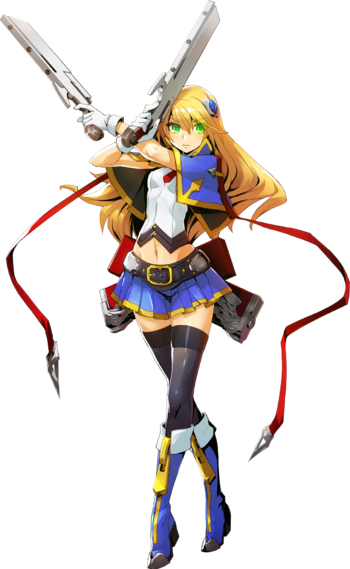 The Eye of the Azure. Flat as a board and needs a screw.
Click to see her original outfit. 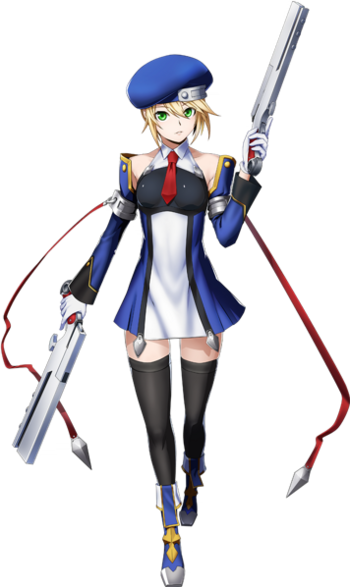 Voiced by: Kanako Kondo (Japanese) / Cristina Valenzuela, Laura Bailey (CS2, Arcade Mode) (English, Calamity Trigger-Chronophantasma)
A hapless Lieutenant in the NOL serving under Jin Kisaragi. She trained at the academy along with Jin, Tsubaki Yayoi, Makoto Nanaya, and Carl Clover. When Jin rushes off to hunt down Ragna without permission, Noel is assigned to stop him and bring him back to The Library. The guns she wields are the Arcus Diabolus: Bolverk, and are also a Nox Nyctores. She suffers from amnesia; over the course of the games, she discovers who she truly is, and the truth has changed her life ever since.
Advertisement:
Her arcade playthroughs are named, in order of the game: Sleeping Beauty, The Pain and accept one's portion. Her story playthroughs are named, in the first 2 games: Lost child and Desperation.
Her drive ability, Chain Revolver, lets her perform a multitude of chain combos with her guns. Her Overdrive is Chain Quasar, which increases the speed of her Drive attacks.
In the fourth game, her Exceed Accel Zero-Gun: Sleipnir has her stun her opponent with a poke of her gun, then fires a Thor missile at them that launches her foe away. Then she transforms her gun into a giant railgun and fires a shot at the faraway opponent. If done in Active Flow, she does the Chamber Shot and Fenrir before the Thor missile, which leads to the railgun as well. Her Astral Finish, Valkyrie Veil, has her creating a magical seal around her opponent and shooting them repeatedly with her guns. She then detonates the seal from within by clashing the butts of the guns together. In CP, however, it is now a Counter-Attack, and the animations where she shoots the opponent are done in an anime-style sequence as she creates a different seal from her old one. Otherwise, it is the same as before.
Advertisement:
open/close all folders
# - C
D - N
M - S
Makoto: "Are you OK? Do you know who I am?"
Taokaka: "Uh… I see… three sets of boobies… and one… cutting board…"
Noel: (utterly humiliated, sobbing) "C-cutting board?! She actually compared me to a cutting board!"
T - Y 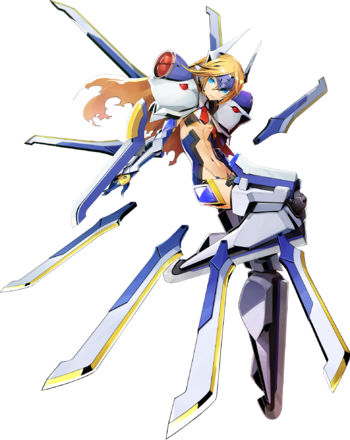 Voiced by: Kanako Kondo (Japanese) / Cristina Valenzuela, Julie Ann Taylor (CS2 Arcade Mode) (English)
This is the form that Noel takes after being converted to her original Murakumo Unit form. She is being mind-controlled by Terumi and her hatred for the world has now increased. Seeing as how she is the True Final Boss of Story Mode, she is a secret character who can be unlocked by beating the True Ending or by downloading her via the Play Station Network Store or Xbox Live Marketplace.
Confirmed as a returning character in Chronophantasma. It has been revealed that Noel has willingly allowed herself to be transformed back into her true self by Rachel in order to save Tsubaki.
Her Arcade mode playthroughs are named, in second and third game respectively: Wrath Blade and cloudless sky.
Her Drive, Steins Gunner, allows her to create small orbs of energy that can be used to fire lasers everywhere. Her Overdrive is Steins Gazer, which makes her orbs fire lasers constantly until the Overdrive duration ends (or until she detonates them).
In the fourth game, her Exceed Accel Tsuchi Ikazuchinote Lit. "Earth Thunder"/Pillar of Light has her stun the foe with a slash, then multiple swords revolve around the foe and proceeds to impale the foe from all sides, creating a big explosion right after. Her CS Astral Finish, Sword of the Godslayer traps the opponent in a crystal as she conjures up her sword, Kusanagi, which is engulfed in flames. She then slices the crystal prison in half, with the opponent still inside. In the third game, it has a different animation: After trapping the opponent in the crystal, instead of lifting them and slashing them once she spreads her Murakumo petals and they transform into 8 Kusanagi swords that are supercharged with energy. The swords converge around the crystal and explode, reducing the surrounding area to a nuclear wasteland.
Tropes involving Mu