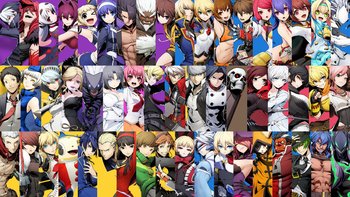 For more tropes pertaining to these characters, check their respective series' pages: here for BlazBlue, here for Persona 4 Arena, here for Under Night In-Birth, here for RWBY, here for Arcana Heart, here for Senran Kagura and here for Akatsuki Blitzkampf. 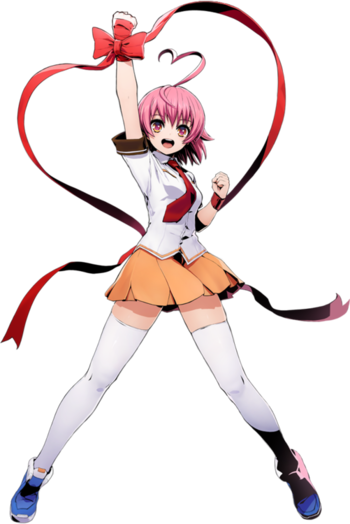 The angel who fights for love and justice!

Awfully cheerful and innocent, Heart is a type of person who believes that there is no such thing as a truly evil person. Having grown up watching every TV superhero show possible, she has desire to spread LOVE and justice where she can, even where she isn't wanted. She is also a Maiden, a person who can see and interact with Elementals called Arcanas, and generally can get along with many of them. Because of this, she is considered special among other Maidens, which has drawn the attention of many people.

As a novice fighter, she pours her emotions into every punch she throws out. Having made a contract with Partinias, the Arcana of Love, she can channel light that Partinias' love generates to fire off projectiles.

Heart is a versatile rushdown character afforded fantastic mobility and pressure by her unique Homing Dash Cancel mechanic, letting her cross the screen quickly and giving her some of the best air mobility of all the cast. As she fights with her fists, she has limited reach on her normals, and overuse of her Homing Dash can burn through her meter very quickly.

Her Distortion Skills are Iron Fist Punch of Love, a powerful wind-up punch, Amazing Heartful Punch, a multi-hitting uppercut and Amazing Special Kick, a powered-up dive kick. Her Astral Heat is Super Amazing Iron Fist of Love, where she hits the opponent with two diagonal punches, followed up with her summoning Partinias who summons a giant energy ball which Heart drops at the opponent.
Advertisement: 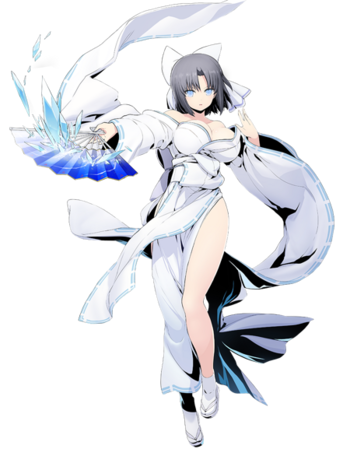 As a shinobi, and as an agent of justice, I cannot afford to be defeated here.

Leader of the the elite class of students in Gessen Girls School, a prestige school for good shinobi. After her parents were killed by evil shinobi, she was adopted by her grandfather Kurokage who was a renegade shinobi due to his beliefs. Yumi ended up adopting her grandfather's vision of the world, wanting to eradicate all evil shinobi from the world and anyone associated with them. However, interactions with other good shinobi such as Asuka and seeing the so-called evil shinobi caused her sense of justice to mellow down, now wanting to be the Moon's judgment against those who lurk in the dark.

Thanks to being trained by her grandfather, Yumi combines traditional Japanese dancing with pair of hand fans with the ability to manipulate ice to fight evildoers by creating icy winds and chunks of ice. 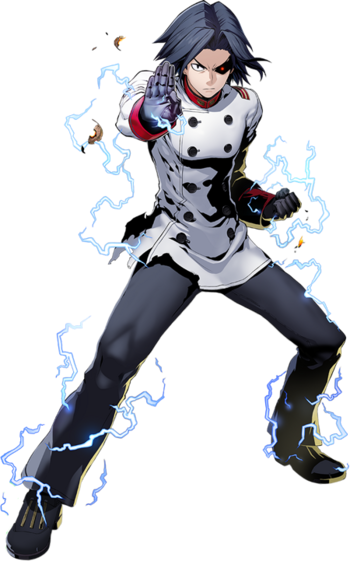 The God of Thunder

Let sorrows pile upon me. I will face them all to the fullest extent!

Akatsuki was a high-class technical officer in the Japanese Imperial Army during World War II who was believed to have died while transporting an allied enemy unit across the Arctic Ocean. Over fifty years later, however, he has reappeared, having never aged a day and gifted with immense strength and control over the forces of electricity, thanks to the mysterious "Blitz Motor". With these new powers, he seeks to finish the mission he undertook long ago.

Akatsuki fights with his own unique style of military-based martial arts, with no weapon to speak of besides his military suit, Taktischeblitzanzug, and the powers he obtained via the Blitz Motor. Using the Blitz Motor, Akatsuki can use electricity in a number of ways, including shooting balls of lightning or imbibing electricity into his own punches or grabs.

His Distortions, Kamikaze (Divine Wind) are a series of rapid strikes with the finisher being an explosive Blitz Shot; and the other being Thunderbolt, which is a very hard hitting Armor Piercing Kick. His Astral Heat, Ouka-Kai (Cherry Blossom Revised), is a single punch that calls down a bolt of lightning to finish his opponent.

Blitztank (Denkosensha) (Ver 2. 0 Expansion Pack)
Weapon: Itself
Voiced by: None 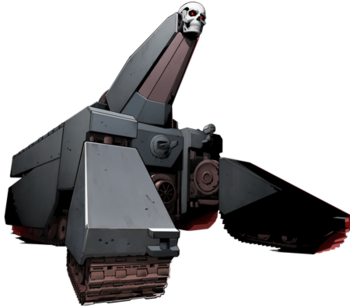 An electrical tank, presumably powered by a Blitz Motor, and implied to have been developed by the secret military group "Gessellschaft". Though it started out as a mindless Mecha-Mook, an encounter with Akatsuki caused it to start developing rational thought... or more accurately, remember that it once had rational thought.

Though as slow as it is large, Blitztank contains an arsenal within its mechanical body, firing out bullets, lasers, flames, bombs, and mines, keeping opponents at bay with projectile-based mixups.

Blitztank's Distortions Gjallarhorn fires a massive beam onto its opponent; while Blitzlauf rams the opponent at high speed. Blitztank's Astral Heat, Ragnarok, is a devastating Wave-Motion Gun that first strikes the opponent into a rush, makes a 180 turn, then shoots blitz mines and then fires a massive beam of violet electricity to vaporize its target. 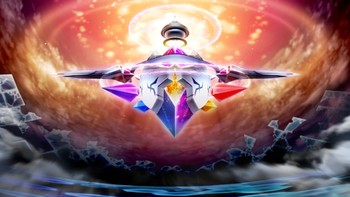