WARNING: This page contains unmarked spoilers for the RWBY web series at least from before Volume 6. If you’re new to RWBY, then turn back now. YOU HAVE BEEN WARNED. 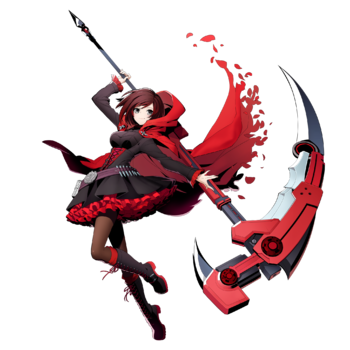 A Huntress in training, Ruby Rose was raised on heroic stories told to her by her late mother Summer and dreamed of being a great Huntress just like her to help others in need. Trained to wield her custom made weapon Crescent Rose thanks to her uncle Qrow Branwen, her skills with the weapon allowed her to foil a robbery, which impressed Professor Ozpin; she was subsequently allowed to transfer early into his school, the prestigious Beacon Academy, to continue her training. To help hone her potential, Ozpin placed Ruby in a team alongside her older half-sister Yang Xiao Long, heiress Weiss Schnee, and the Faunus Blake Belladonna, forming Team RWBY.

Using her Aura, Ruby can tap into her Semblance of Speed, allowing her to dash and move around at speeds faster than the eye can see. She also wields a hybrid weapon she personally made called the Crescent Rose, which can take the form of a scythe, or an anti-armor sniper rifle which can fire bullets infused with multiple Dust elements.

Ruby is a very beginner-friendly all-rounder with a lot of mobility and reach, variety in options across the board and no obvious weak areas. Even though she has fast-moving projectiles, they all have a distinct windup and are easy to circumvent, so this rookie Huntress is no true zoner.

Her Distortion Drives are Petal Burst, a dashing attack slashes her opponent repeatedly on impact; and Petal Dance, a series of twirling slashes and blasts followed by a powerful final strike. Her Astral Heat, Red Reaper, has her drop kick the opponent and use her Speed Semblance to fly into the sky, hooking them around the neck with Crescent Rose to take them along for the ride. She propels herself higher and higher by firing Crescent Rose repeatedly before flipping upside down and using one final shot to decapitate her opponent in a flurry of rose petals.
Weiss Schnee
Semblance: Glyphs
Weapon: Multi Action Dust Rapier: Myrtenaster
Voiced by: Yōko Hikasa (Japanese), Kara Eberle (English) 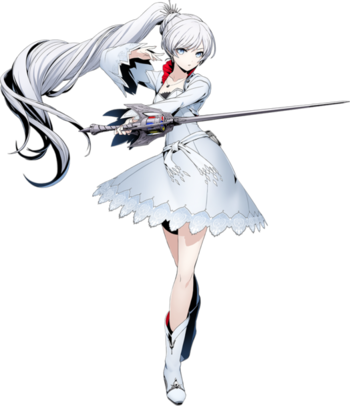 My name is Weiss Schnee. You would do well to remember it.

The heiress to the Schnee Dust Company, Weiss became a Huntress training at Beacon to follow in the footsteps of her older sister Winter and to escape the oppressive grasp of her abusive father, Jacques. Weiss is a headstrong and intelligent girl with a lot to prove to others and herself - on the surface she comes across as dignified, arrogant and harsh, but this belies a surprising maturity, a compassionate heart, and a fierce sense of loyalty to her inner circle of friends. Weiss will not stop until she has redeemed the honour and integrity of the Schnee family name lost by the ruthless business practices her father brought about.

She wields the revolver/rapier Myrtenaster in battle, using it to channel various Dust capsules and invoke their powers in her sword play. As her name and literary inspiration imply, she does favor a lot of ice attacks, but her various Dust attacks allow her to use a mix of different elements in conjunction with her Semblance ability to create glyphs from which to project her attacks.

An intelligent and flexible fighter, Weiss is a character centered on setups. She can poke into mid with her normals, attack at longer range with her ice shards (though they are slow) and even has some tools for defence and space control as well. That said, her normals are more linear than Ruby's so choosing the right one for the specific situation is paramount and choosing poorly can see Weiss catching a punishing hit.

Her Distortion Skills are Glacial Torrent, which covers the ground in front of her in ice; and Snow Flurry, a series of lightning-fast slashes rising into the air with the aid of her glyphs. Her Astral Heat, White Night, has her summon a glyph under her opponent’s feet that propels them into the air while she summons six smaller glyphs around her that each fire two energy blasts at the opponent that traps them in a barrier. She then jumps above the opponent while summoning a massive ice sword from a larger glyph and finishes them with a downward thrust from both the ice sword and Myrtenaster, leaving behind nothing but gently falling snow.
Blake Belladonna
Semblance: Shadow
Weapon: Variant Ballistic Chain Scythe: Gambol Shroud
Voiced by: Yu Shimamura (Japanese), Arryn Zech (English) 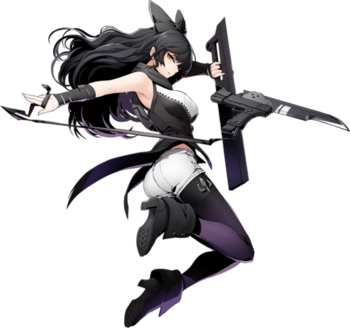 I'm a member of Team RWBY, I can't afford to disappoint.

A Huntress student at Beacon Academy and part of Team RWBY, Blake hides a dark secret - she used to be part of the Faunus terrorist organization White Fang until she stepped out, realizing how inhumane and extremist their methods were becoming. As Faunus are often prejudiced towards, she hides her cat ears under the ribbon on her head. Despite her efforts to start a new life and move away from her past, issues regarding Faunus prejudice still rile her up from time to time. Blake is normally very cool and reserved but has a surprising dry wit that occasionally reveals itself; she is outspoken and righteous, respecting the livelihoods of others but never hesitating to openly condemn the indefensible.

In combat, she's an agile fighter who wields Gambol Shroud, a mix of an automatic pistol and katana that she can turn into a sickle with a long ribbon to manipulate it from a distance. It also has a sharpened sheath that she wields alongside the first weapon. Her Shadow Semblance lets her create shadow images of herself to distract and overwhelm her foes.

Blake is a tricky to use mid/long-range specialist with very good mixups and downright oppressive normals at mid-range. She is quick on her feet and her clones can be used offensively or defensively. On top of all that, Blake has many useful assists and can pair with most of the cast fairly well. Her damage and HP are relatively low and she requires effort to make work, but the practice will pay off with her.

Her Distortion Skills are Untouchable Beauty, a sword wave that reaches across the screen; and Ferocious Beast, a rising slash that follows into an overwhelming flurry of slashes. Her Astral Heat, Black Death has her kick the opponent into the air and slash them with both blades before jumping above them and delivering a spinning strike with her sickle as she drives them back down into the ground before they dissolve away like dust in the wind.
Yang Xiao Long
Semblance: Burn
Weapon: Dual Ranged Shot Gauntlets: Ember Celica
Voiced By: Ami Koshimizu (Japanese), Barbara Dunkelman (English) 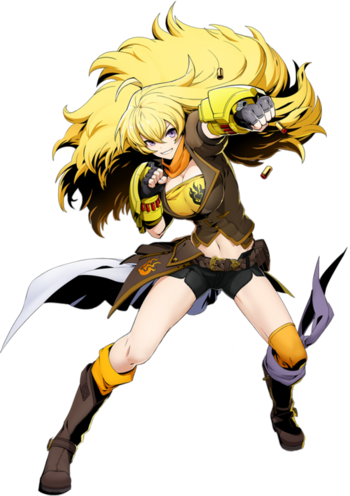 The older half-sister of Ruby Rose and the fourth member of Team RWBY, Yang's early years were marred with having to take care of her little sister after her step-mother, Summer Rose, died before Ruby had even learned how to talk, and learning about her own birth mother, Raven Branwen, who had walked out just after she was born. Yang is a natural-born fighter and thrill seeker who took to Huntress training at Beacon like a fish to water, being strong and confident yet also approachable and tender to her family and friends. However her boisterous and cheerful personality hides a hurting girl who is coping with a lot of inner pain and desperately looking for a greater purpose in life.

In combat, Yang wields the powerful Ember Celica, shotgun gauntlets that augment her already amazing close-range combat capabilities. Her Semblance increases her combat potential the harder she's struck, though she can easily lose control of that if she's angered... such as having her hair cut.

Yang is an aggressive, short-range rushdown character with great mobility relative to her high health. Her Rage Semblance which triggers whenever her health drops into the "Danger!" point, not only causes the damage of her normals to skyrocket into some of the most damaging normals available to any character, but also extends some of her combos and adds extra properties to her attacks too. However her normals have limited reach and she is heavily reliant on meter to deal outside her empowered state.

Her Distortion Skills are Burning Gold, a full-screen charging Megaton Punch; and Unrelenting Fire, a series of rolling punches ending with a final explosive punch. Her Astral Heat, Yellow Dragon, is a No-Holds-Barred Beatdown that ends with a final earthbound punch that incinerates her opponent. 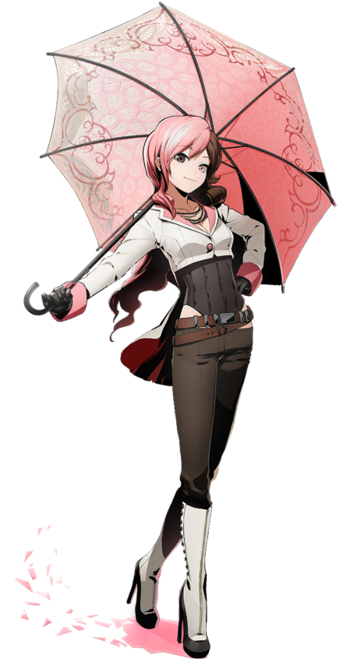 The right-hand woman of Vale crime boss Roman Torchwick, much of Neo Politan's past is shrouded in mystery, none of which is helped by the fact that she's implied to be mute. First encountered by Team RWBY as they pursued Roman and the Faunus extremist group known as the White Fang, Neo's illusions facilitated a clean escape for her boss. A disasterous attempt from Yang to battle Neo later nearly ended fatally for the young Huntress and put on display just how out of RWBY's league Neo was. Outwitted by Ruby during the Battle of Beacon, Neo was powerless to save Roman from being killed, leaving her with an intense hatred and a craving for vengeance against everyone she felt was responsible for his death, with Cinder, and possibly Ruby, at the top of the list.

In battle, Neo is something of a dancer that twirls, spins, and flips all about as she weaves in attacks. In addition with her semblance capable of producing illusions so convincing one can physically clash with and Neo almost impossible to pin down. Finally, her parasol is capable of serving as a shield and contains a hidden blade in the tip making Neo more than capable of throwing down with your average Huntress even without Dust.

Her Distortion Skills are Overactive Devastation, a 3 hit strike using her semblance with the final hit using her umbrella; and Suspension of Disbelief, a command grab super that allows her to follow up for further damage right after. Her Astral Heat, Shattering Skewer is a rapid-fire series of strikes along with an illusory duplicate, beating her opponent down before running them through with her sword.
A story will be told, and victory is in a simple soul...