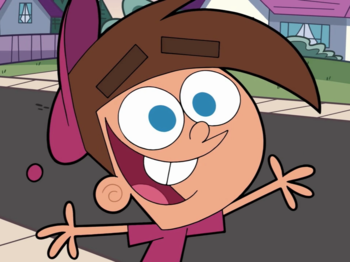 "What Could Possibly Go Wrong?"

The main character, described as "an average kid who no one understands" in the theme song. Voiced by Tara Strong in the series. In the pilot, Timmy was voiced by Mary Kay Bergman from South Park. He was portrayed by Drake Bell in the live-action movie. 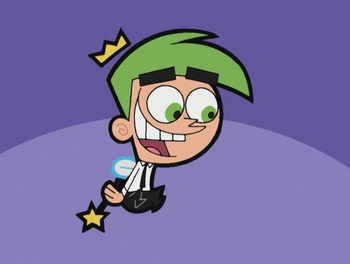 "I'm not bright, big words confuse me, I have the attention span of a rodent, and Wanda loves me anyway!"

Timmy's fairy godfather. Dumb as a sack of bricks, he can barely grant a wish by himself without causing mass chaos. Voiced by Daran Norris. 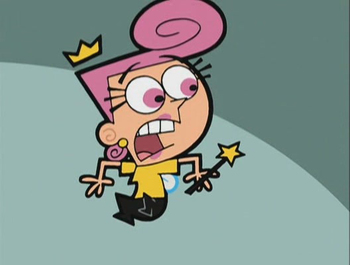 Timmy's godmother. She's usually the one who sees the consequences of Timmy's wishes, but is often ignored for her very justified worry. Voiced by Susanne Blakeslee. 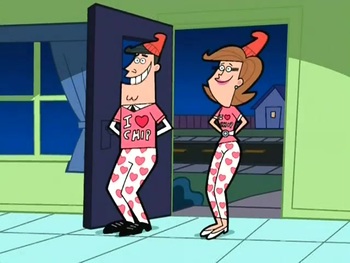 Mrs. Turner: I'll get our coats!
Mr. Turner: Forget it, at the speed we're having fun, our friction will keep us warm!
Timmy's clueless and neglectful parents, they care more about their happiness than Timmy. Mr. Turner is a pencil pusher while Mrs. Turner is a real-estate saleswomen. Like Timmy's other parents, they are voiced by Daran Norris and Susanne Blakeslee. Mrs. Turner was portrayed by Teryl Rothery in the live-action movie.
Vicky 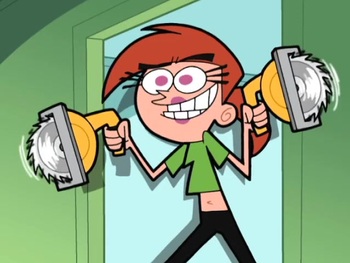 Timmy's malicious babysitter who takes delight in tormenting Timmy and the other children in Dimmsdale. Her two biggest loves are pain and money. Voiced by Grey DeLisle and portrayed by Devon Weigel in the live-action movie. 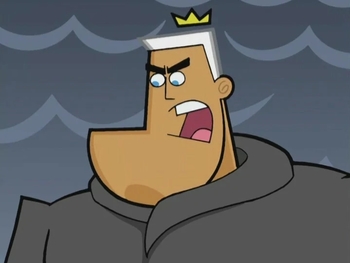 "I don't have a lot of friends, okay? I mean, you punch them in the face once and it's all, 'Ooh, stop punching me!'"

The commander-in-chief of Fairy World, he runs the place with an iron fist. He's the most powerful fairy in the universe. Voiced by Daran Norris (not Rodger Bumpass). Portrayed by Mark Gibbon in the live-action movies. 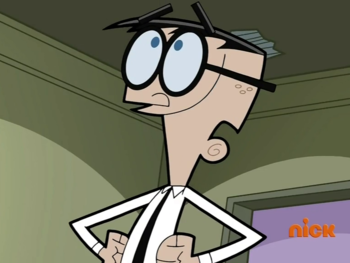 "This has to be the work of... FAIRY GODPARENTS!"

Timmy's schoolteacher who, due to an incident in his youth, is obsessed with proving that fairy godparents exists and wants to use their magic to Take Over the World. Voiced by Carlos Alazraqui. Portrayed by David Lewis in the live-action movie. 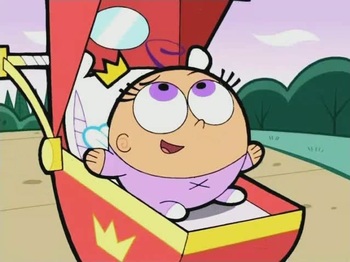 Cosmo and Wanda's baby son, born at the start of the show's sixth season. Like his godbrother, voiced by Tara Strong. 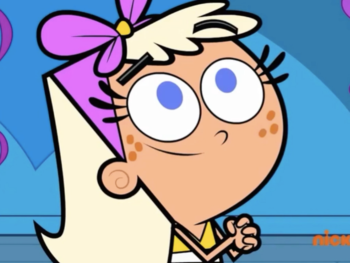 Chloe Carmichael is an enthusiastic, funny and over-achieving little girl who Timmy has to share his fairies with. She's also Timmy's new neighbor. She first appears in Season 10, and is voiced 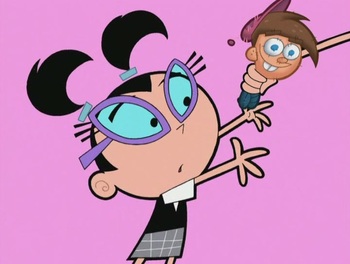 "You're here? In my house? Hm, my Timmy-tracker must be malfunctioning."

Vicky's little sister who harbors an obsessive and unrequited crush on Timmy. Although he usually rejects her advances on account on finding it frightening, Timmy has shown many times in the series to genuinely care for Tootie unlike any other non-fairy or family character, even loaning her his fairies on one occasion note According to the live action TV movie, she grows into a beautiful adult and Timmy falls in love with her. Like her sister, she is voiced by Grey DeLisle, though in her first appearance she was voiced by Amber Wood. Daniella Monet portrayed her in the live-action movies. 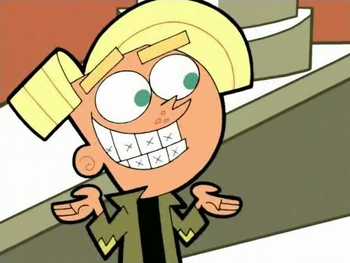 "No one makes a fool out of Chester McBadbat! Except the school system, the government, and every girl I've ever met!"

Timmy's best human friend, Chester is boy who lives in a trailer and enjoys downing garbage. Thanks to his father's failed career, he is dirt poor. He is currently voiced by Jason Marsden. Formerly voiced by Frankie Muniz. Portrayed by Chris Anderson in the live-action movie. 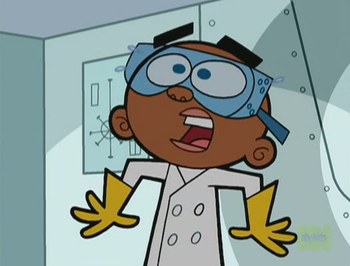 "Relax, it's just college. I'll be done in two weeks."

Timmy's other best human friend, AJ is a genius that could give Jimmy Neutron a run for his money. He is currently voiced by Gary Leroi Gray. Formerly voiced by Ibriham Haneef Muhammed. Portrayed by Jesse Reid in the live-action movie. 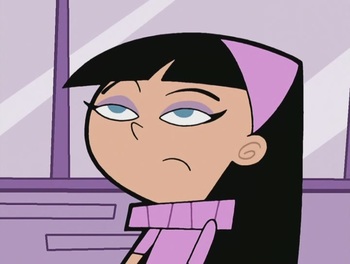 The popular schoolgirl whom Timmy has an unrequited crush on. She doesn't seem to return the affection unless he makes a wish resulting in it. Voiced by Dionne Quan. 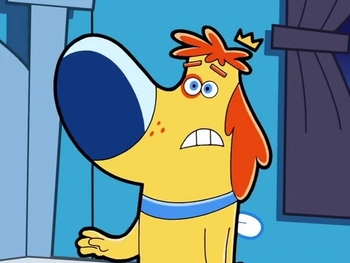 Timmy's Fairy Dog. Timmy ends up owning him at the start of season 9. Voiced by Maddie Taylor.