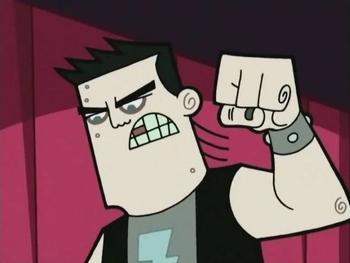 "It's time for me to beat the lunch money out of you!"

The school bully of Dimmsdale Elementary. He regularly beats his favorite target, Timmy, to a pulp. Voiced by Faith Abrahams. 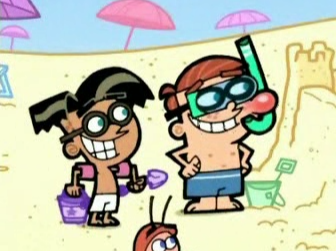 Sanjay (on Timmy): Well, we sort of hang out together, but I've never been to his house.

Timmy's back-up friends. Sanjay is a boy from India with a shrill voice. Elmer is a kid with a huge boil on his face. Unknown to most, that boil is sentient, and is always trying to lead Elmer to do evil things. All three are voiced by Dee Bradley Baker. 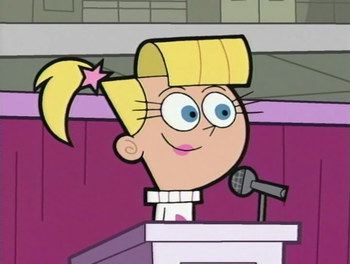 Trixie's best friend and a member of the popular kids. She clearly wants Trixie's position and schemes to get it. Voiced by Grey DeLisle. 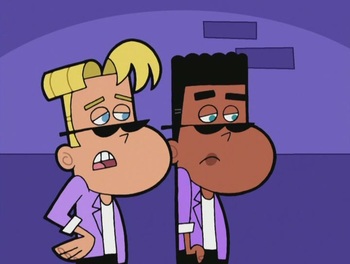 The male members of the popular kids, these two will go out of their way to be mean and take opportunities to make people feel like dirt. Tad is voiced by Tara Strong, Chad by Grey DeLisle.

Parents
"I'm both respecting your privacy by knocking but asserting my authority as your (father/mother) by coming in anyway!"

The parents of the children of Dimmsdale. Like all adults, they are clueless and utterly useless in an emergency. Sanjay's mom and Vicky's mom are voiced by Tara Strong, Elmer's mom, AJ's mom, and Veronica's mom by Grey DeLisle, Bucky McBadBat by Rob Paulsen, AJ's dad by Kevin Michael Richardson, Sanjay's stepdad by Dee Bradley Baker, Dolores-Day Crocker and Trixie's dad by Carlos Alazraqui, Mr. Buxaplenty by Daran Norris (Jim J. Bullock in Season 9), Mrs. Buxaplenty by Susanne Blakeslee, and Vicky's dad by Jim Ward. In Season 10 with the introduction of Chloe Carmichael, her parents, Clark and Connie Carmichael, are voiced by Mick Wingert and Cheri Oteri, respectively. 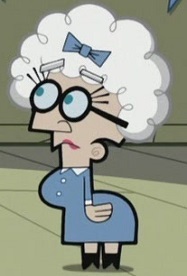 "Denzel! Denzel Crocker! I'm respecting your privacy by knocking but asserting my authority as your mother by coming in anyway!"

Dolores-Day Crocker is a kind-hearted elderly woman who lives in a decrepit old house with her son, Denzel Crocker. Voiced by Carlos Alazraqui.

Principal Waxelplax
"Get away from my jelly!"

The kindly principal of Dimmsdale Elementary, and Crocker's boss. She knew him in their childhood, but now she treats him with disdain. Voiced by Grey DeLisle.

Mr. Birkenbake & Mr. Bickles
Mr. Bickles: My dream of doing a ballet version of Waterworld is ruined! Forgive me Kevin! 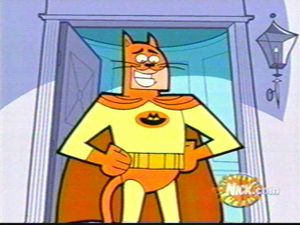 "For whenever someone in Dimmsdale calls for help, but doesn't want me to help them, I will answer that call anyway!"

An insane former actor who believes that he's the superhero he played. Timmy sometimes helps him when he's feeling down, if only to keep him out of jail. Voiced originally by Adam West, and by Jeff Bennett since Season 9 onward. 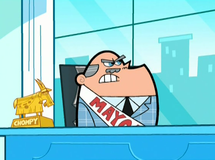 "Citizens of Dimmsdale, as your Mayor-For-Life... You gotta read those ballots people!"

The political leader of Dimmsdale and the town's goat mascot. The Mayor's qualifications for his job are questionable, considering he seems to be easily swayed by blackmail. Both are voiced by Carlos Alazraqui. 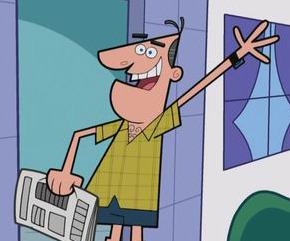 The Turners' next door neighbors, whom Mr. Turner despises. They have a better income since they're childless, and always have better things. Both are voiced by Carlos Alazraqui. 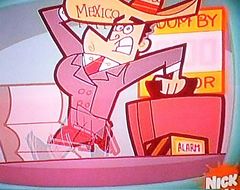 "It's mass hysteria! How will this effect your holiday weekend?"

Dimmsdale's vertically challenged news reporter who's on the scene at any catastrophe. He also announces many sports events. He is voiced by Jim Ward. 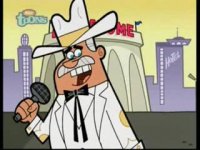 A rich businessman who owns a good deal of Dimmsdale, including the Dimmadome, the TV stations, the local basketball team, and the former Dimmsdale Flats. He gets unethical in his practices whenever the plot demands. He is voiced by Jim Ward.

The two workers of Flappy Bob's Learn-a-torium, these two are always ready to spread "fun" amongst the children. Gary is voiced by Rob Paulsen, Betty by Grey DeLisle. 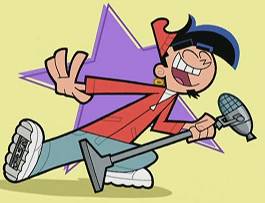 "Another day, another wackadoo holding me against my will."

A pop teen singing sensation who Timmy has helped more than once. Voiced by *NSYNC's Chris Kirkpatrick. 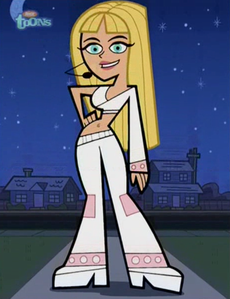 "That's it. No more private gigs."

Another teen pop sensation, she's so rich she swims in the tears of her many admirers. She is voiced by Tara Strong.

Sylvester Calzone
"It legitimized me as a film maker and a critic puncher!"

A Dimmy-winning actor living in Dimmsdale. He unwillingly starred in Timmy's movie and more willingly attended SepTimberfest. Has a habit of punching out critics who give his movies bad reviews. He is voiced by Jim Ward.

"We're from MERF, not to be confused with MARF... which we've got tickets to tonight!"

The incompetent agents of the Military Alien Response Force, whose job is to look out for extra terrestrials. They are voiced by Patrick Warburton. 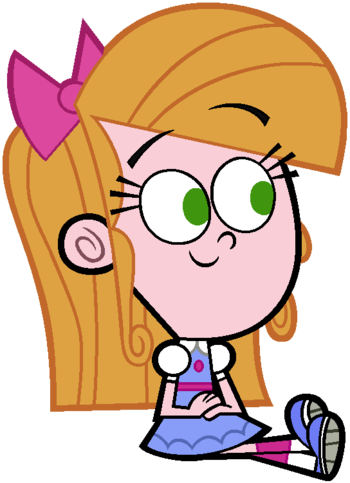 Hi. Timmy right? Sorry to bother you, but I think you have my phone.
Missy is a classmate of Timmy Turner's at Dimmsdale Elementary School that first appeared in Season 9.
Clark and Connie Carmichael 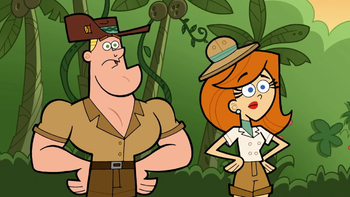 Clark (left) and Connie (right)
Chloe's overbearing parents. She loves them, but describes them as being too involved in big picture affairs. Clark is voiced by Mick Wingert, and Connie is voiced by Cheri Oteri.
Hummanuh 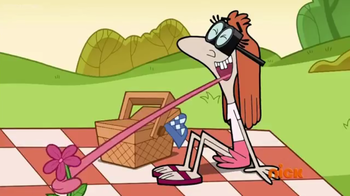 "I'm too claaassy to live in a basement!"

"The Most Annoying Woman in the World" wished up by Chloe and Timmy for the express purpose of dating Mr. Crocker and getting him off their backs. She appears only in "Married to the Mom". Voiced by Grey Griffin.

Marty and Mitzie
Two rich kids who appear in the third live action movie and befriend Timmy and Tootie and become Cosmo and Wanda's new godchildren.