Characters / The Fairly OddParents - Others

Main Character Index | Major | Humans | Fairies | Villains | Others
open/close all folders
Ryan Mc Cain
A rugged action star with sharp features who's purpose is to be a "Loose Cannon Cop on the Edge Who Doesn't Play By the Rules!" Timmy watches his movie in the episode "Action Packed", and they do a musical embodiment of him in "Chip off the Old Chip".
Advertisement:
Mark Chang 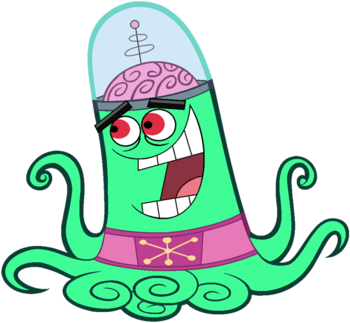 "You Earth children are not afraid of me? Or my straws?"

An alien prince from Yugopotamia and a former enemy of Timmy's. Now he's hiding out on Earth with Timmy's help to escape marrying Mandie. Voiced by Rob Paulsen.

Mark's parents and the rulers of Yugopotamia. Despite being the rulers, they seem totally useless during emergencies, like the Gigglepie invasion or their son's runaway. They are voiced by Rob Paulsen and Laraine Newman, respectively.

Jeff and Erik
Erik: Radioactive waste!
Jeff: Dude, that's the best kind of waste there is! My parents only got me medical waste!

Mark's two best friends from Yugopotamia. They accompanied Mark to Earth on occasion back when he was evil. Jeff (the tall one) is voiced by Carlos Alazraqui, Erik (the short one) by Butch Hartman. [Note: This entry applies to Yugopotamians in general as well.] 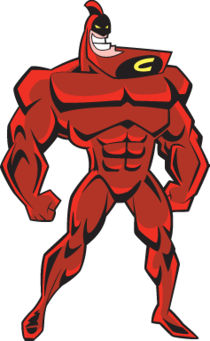 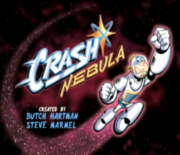 Timmy's other geeky obsession after the Crimson Chin, Crash Nebula is the star of Timmy's favorite TV show. He's an intergalactic hero that travels through space, thwarting evil. His adult self is voiced by Daran Norris, his child self, Sprig Speevack, is voiced by James Arnold Taylor.

Advertisement:
Santa Claus
"Hey ladies! How'd you like it to be Christmas every day?"

The saint of Christmas, Santa lives at the North Pole, distributing gifts to the good girls and boys on Christmas Eve. He is usually voiced by Kevin Michael Richardson.

Easter Bunny: Thanks to your wish, we other holidays can never spread our joy to the children ever again.

The "second-rate" holidays who spread joy to the world. When Timmy wishes for Christmas to be everyday, they grow jealous of Santa and conspire to end the holiday once and for all. Cupid and the April Fool are among their ranks. The Easter Bunny is voiced by Bobby Costanazo, Baby New Year by Kevin Michael Richardson (?), and Halloweeniedog by Dee Bradley Baker (?).

The one chosen by the Fairy Council to be the chosen one, but he showed up late to the Darkness' first attack. He is hoping to defeat the Darkness to avenge his parents' death. He is voiced by Brendan Fraser.