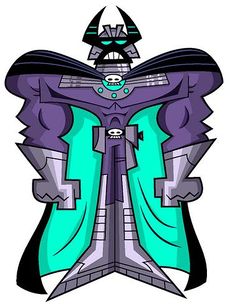 "Just hear me out, 'cause once you get a taste of the daaaark power, you'll never go back."

A sci-fi movie villain Timmy wished to life. Now he floats in space, waiting for a chance to destroy the Earth and conquer the universe. Doesn't he look familiar? Voiced by Kevin Michael Richardson.

Advertisement:
Dr. Bender and Wendell
Dr. Bender: And now I'm going to get medieval on your mouth!

Dimmsdale's resident dentist and his son. Both take great pleasure in acting like complete jerkasses. Both are voiced by Gilbert Gottfried. 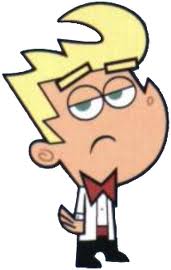 "Winner gets to keep his godparents, and loser, and by loser I mean Turner, forgets he ever had them..."

A lonely rich godchild. He resents Timmy for having real parents and godparents. He is determined to make Timmy lose Cosmo and Wanda. Voiced by Dee Bradley Baker.

The Crimson Chin has a whole gallery of villains to fight. While they mostly cause havoc in the Comic Book World, they occasionally break the barrier and escape into the real world. The Nega Chin is voiced by Jay Leno, the Bronze Kneecap and the Brass Knuckles by Dee Bradley Baker, H2Olga by Susanne Blankslee, Country Boy by Tara Strong, Spatula Woman by Grey DeLisle, Short Fuse by Jim Ward, and the Gilded Arches by Rob Paulsen.

More often then not, Timmy's wishes go awry, meaning he creates some interesting baddies for himself to fight. Even after being unwished, they are confined to storage, which only increases their hatred for Timmy. Oddly, this storage contains several things that Timmy technically never wished for in the first place, like the Sphinx, the Gigglepies, and the Founding Fathers. Their leader, Imaginary Gary, is voiced by Jason Marsden, Overlord Blee by Tara Strong, Trilli the Trust Gigglepie by Grey DeLisle, Superbike and the Sergeant Gigglepie by Carlos Alazraqui, George Washington by Daran Norris, Thomas Jefferson, Benidict Arnold, and the Pumpkinator by Dee Bradley Baker, Benjiman Franklin by Jim Ward, Tommy by Jason Bateman, and the Villain Not Named Shirley by Jeff Garlin.

The former truant officer of Dimmsdale Elementary, currently a teacher at FUN Academy. He loves being sadistic on the job, and takes delight in making kids miserable. He is voiced by Dee Bradley Baker. 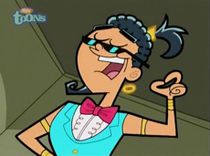 "This is my evil laugh, I've been working on it for a little bit, what do you think?"

A genie trapped in a lava lamp, he schemes to be free, and he doesn't care who he has to step on to get free. He is voiced and named after comedian Norm MacDonald . 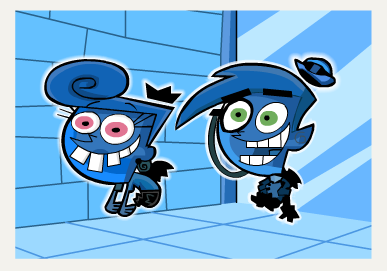 The evil counterparts of the fairies, opposite of them in every way. While fairies spread happiness, the anti-fairies delight in spreading bad luck, especially on Friday the 13th. Each fairy has an opposite among the anti-fairies, who hold the opposite character traits. They are lead by Anti-Cosmo. He and Anti-Wanda are voiced by Daran Norris and Susanne Blakeslee, respectively. Their newborn son, Foop, is voiced by Eric Bauza. 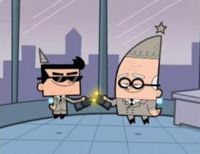 HP: Sanderson, I think this is the beginning of a beautiful new thirty-seven year plan.

A race of creatures who run everything like a business. Like the anti-fairies, they scheme to conquer the universe, but while the anti-fairies want to overrun it with bad luck, they wish to make everything boring. HP (Head Pixie) is the only pixie distinguishable from the lower workers. He is accompanied by his assistant Sanderson. All are voiced by Ben Stein, with the singing voices of HP and Sanderson being done by Method Man and Redman respectively. 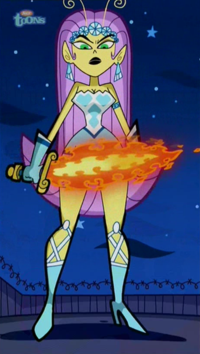 "It's Man-DIE! And no one leaves me at the altar! NOBODY!"

Mark's forced fiancee, she's determined to marry the Yugopotamian prince, whether he wants it or not. She's drop dead gorgeous by human standards, but since Yugopotamians has the opposites standards of humans they find her repulsive. Voiced by Tara Strong.

The Darkness and the Eliminators
"Timmy Turner..."

The villain of the "Wishology" trilogy, the Darkness is an ancient being that the fairies defeated thousands of years ago. Now he's returned with an army of robots known as the Eliminators. All are voiced by S. Scott Bullock, with the exception of the Lead Eliminator, who is instead voiced by Gary Sturgis.

Advertisement:
The Destructinator
The power-crazed leader of the Eliminators who is truly evil, unlike the Darkness.
Ms. Sunshine/Doombringer
A substitute teacher who replaces Crocker in the episode "No Substitute For Crazy". At first she acts nice and sweet, quickly winning the favor of the students and causing Timmy to wish for her to be their permanent teacher. No sooner than this wish is granted, however, she reveals her true colors as yet another fairy hunter. Unlike Crocker, she is much more competent at the job. She is last seen being carried away by a car but vows to return.
Hugh J. Magnate Jr.

A larger-than-life oil tycoon who is the Big Bad of the first live-action movie. He comes to Dimmsdale to tear down the city's local park and build an oil well/hotel over it, which Tootie greatly opposes. When Timmy and the fairies foil his plan, he teams up with Mr. Crocker to capture the fairies and use them to fuel his own maniacal ambition. Portrayed by Steven Weber.