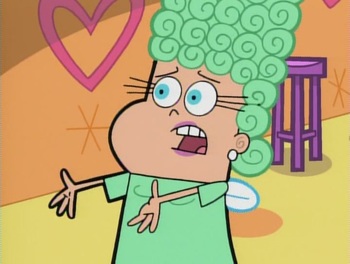 Cosmo's mother, she hates her daughter-in-law and would love nothing more than to see the marriage fail. She is voiced by Jane Carr. 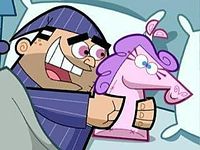 Wanda's father, and head of the garbage collection in Fairy World. He runs the whole thing like the mob, and is even able to intimidate Jorgen. He hates Cosmo (mostly because of his stupidity and refusal to listen to Wanda) but actually loves Mama Cosma for hating Wanda just as much. He is voiced by The Sopranos star Tony Sirico. 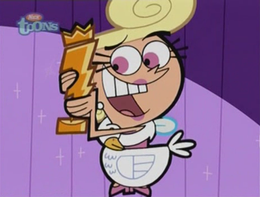 "I can't believe my frump of a sister beat me!"

Wanda's twin sister, who looks identical to her except for the fact that she has blonde hair instead of pink hair. Blonda's the female lead of "All My Biceps," a popular soap opera in Fairy World—despite her success as an actress, she's never won a Zappy-award and is the only fairy in Fairy World (even her sister, Wanda, has won one) to not have one. She is voiced by Julia Louis-Dreyfus in her first appearance, and by Tara Strong in her following appearances. 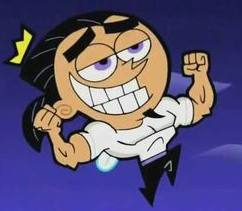 "Timmy, I must say two things. First off, I'm incredible to look at..."

Remy's fairy godfather who also happens to be Wanda's ex-boyfriend. He's extremely vain and narcissistic, and despite how his name looks, it's pronounced "Wan-DISS-e-mo". Voiced by Carlos Alazraqui. 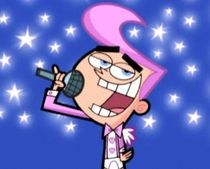 "You're going to need love. Lots of love."

The fairy of love and the patron saint of Valentines Day. He is voiced by Tom Kenny. 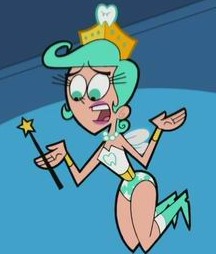 "Jorgen, darling, how many times have I told you how I hate appearing in public WITHOUT MY MAKEUP!"

The most popular fairy, and the one who travels between Earth and Fairy World the most. She married Jorgen. Voiced by Grey DeLisle. 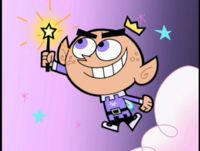 "I'm sorry! I thought the Black Plague was a band! I didn't know it would wipe out half of Europe!" 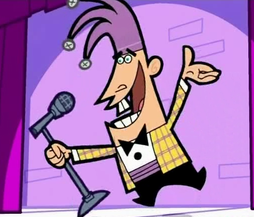 The patron saint of April Fools Day, this fairy loves to pull pranks and tell jokes. Unfortunately, his jokes can sometimes get out of hand. He is voiced by Daran Norris.

Dr. Rip Studwell
"Don't worry Cosmo, everything's looking fantastic...on me. You, on the other hand look like you're in a lot of pain."

Fairy World's resident doctor, he delivers his lines in an over the top, soap opera fashion. Voiced by Butch Hartman.

Billy Crystal Ball & Simon Sparklefield
Simon: I'm quite scared. Would you hold me?

Two celebrities in Fairy World. Billy Crystal Ball is a talk show host as well as host of the Zappys. Simon is an executive in charge of several reality shows and a judge on Fairy Idol. Both are voiced by Carlos Alazraqui.

Fairy World's resident news reporter. She's always looking out for news, particularly if it involves baby Poof. She is voiced and named after Mary Hart.

A group of fairies that govern Fairy World. Their acts include forbidding any more fairies to be born and selecting the Chosen One. They are voiced by Tom Kenny (?).