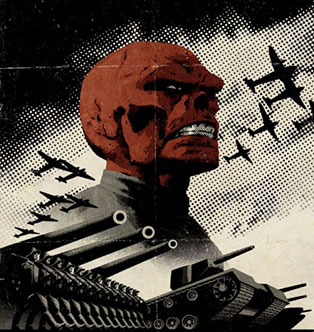 "When it comes to bad, the Red Skull is in a class all by himself."

"His eyes, unfathomably empty, devoid of all compassion... all humanity... No one has eyes like that... no one! All these months I've lived in a fool's paradise, refusing to believe his claim to be the real Red Skull, refusing to believe that my greatest enemy had found a way to cheat death... but he has. The Red Skull lives... God help us all."
— Captain America, Captain America #370
Advertisement:

The established origin of the better known Skull is relatively complex. He was born as Johann Schmidt in a small German village, probably sometime in the 1910s. The Skull's mother Martha died giving birth to him, causing his drunken lout of a father to try and drown him, saying that the infant had murdered his wife. A doctor managed to prevent him from killing his newborn son, but the angry father went on to commit suicide. Growing up alone, the rise of the Nazis backdropping his life, young Schmidt eventually found himself living a hard life on the streets, all while nursing a growing anger and frustration towards the rest of the world. As an older teen, Schmidt managed to get a job as a bellhop for a major hotel frequented by Adolf Hitler. Schmidt was present for one occasion when Hitler was angrily berating the head of The Gestapo (or just some random German officer) for letting a spy escape, and screamed at the man that he could make even the bellhop into a better Nazi than him. He did.

Hitler, who seemed to recognize much of himself in the frustrated, resentful, unsuccessful yet obviously talented young man, became a sort of Evil Mentor and father figure to him, encouraging him to educate himself and grooming him for a powerful position in the Nazi state. (According to one version, to be his own successor.) Subordinate only to Hitler himself, the young, brilliant and ruthless Schmidt was placed in charge of foreign espionage and terrorist activities, playing a key role in Nazi victories in Europe and spreading fear (his red skull mask was intended to be a symbol of terror while Hitler could remain the popular leader in a national version of Good Cop/Bad Cop). He eventually moved onto the United States as World War II continued and sabotaged the top secret Project Rebirth by assassinating Prof. Erskine. Preparing for the inevitable war against Germany, the Americans decided to create their own Good Counterpart to the Red Skull's evil, the sole successful Super Soldier serum test subject, Steve Rogers, and trained him to become Captain America, the man who was to become Schmidt's Arch-Enemy.

However, as the war dragged on the Skull started to see that Germany was not going to win, and instead made plans to escape and build a new power base elsewhere to continue the struggle. In the meantime he assigned rival Nazi Baron Heinrich Zemo to a secret mission to assassinate Captain America, hoping the two would kill each other off. In the event, Zemo was defeated and Roger's sidekick Bucky Barnes was (seemingly) killed, but not before Captain America tracked the Skull to his secret bunker and engaged him in battle. Cap won and apparently killed the Skull, but in reality he was merely a Human Popsicle, a fate that Cap would shortly suffer too after his battle with Zemo.

Captain America was revived by The Avengers, but not long after their enemies HYDRA discovered the Skull and revived him too. The Skull allied with them for as long as they were useful but secretly he was biding his time until he could steal the Cosmic Cube from AIM, the science division of HYDRA, the Cube being an Artifact of Doom that bestowed upon the user Reality Warping and godhood. He once again battled Captain America and was once again defeated, but subsequently managed to establish himself as a major and continuous threat to the world, with access to considerable resources.

The Red Skull subsequently engaged in numerous more terrorist and mass murder schemes to wreak havoc across the world and kill Captain America, even managing to make himself Secretary of Defence disguised as one Dell Rusk, plus more attempts to possess a Cosmic Cube, before finally being assassinated by the Winter Soldier, a brainwashed, insane and very-much alive Bucky Barnes, but used a weakened Cube to transfer his mind into a Russian general named Lukin, the man who had him killed. Sharing his body, the Skull forced Lukin to go along with his schemes to manipulate the superhero Civil War so as to get one of his puppet politicians elected as President, and later tried to transfer his mind into Captain America's unborn child, before it was murdered by an increasingly rebellious Sin (his daughter). He later allied with Norman Osborn following his rise to power and finally managed to take over the body of Captain America himself, but after wreaking further damage was expelled and killed, this time for good.

This being a comic book, the Red Skull returned in the pages of Uncanny Avengers during the Marvel NOW! relaunch, though as a clone in stasis since World War II... who gains access to Professor Charles Xavier's Psychic Powers.

The Red Skull appeared in the Marvel Cinematic Universe as a villainous Chessmaster, Nazi super-scientist, and the founder of HYDRA in Captain America: The First Avenger. The MCU version is a Composite Character of the comic book Red Skull, Baron Strucker (the founder of HYDRA in the comics) and Baron Zemo (the Stupid Jetpack Hitler elements), although both Strucker and Zemo later appeared in the MCU in their own right. It amused many fans that Hugo Weaving was cast to play yet another powerful enemy named "Schmidt" with an appropriately and enjoyably OTT performance.

Red Skull has appeared in: