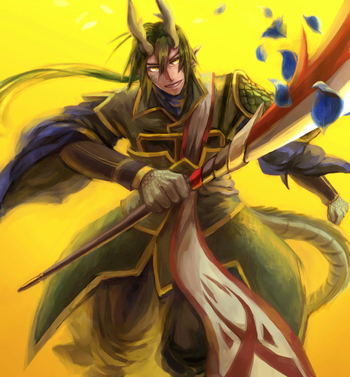 Here's the link to my (original) profile pic, which is drawn by a Pixiv Artist named しゃち (aka Syatiti): https://www.pixiv.net/member_illust.php?mode=medium&illust_id=42528199 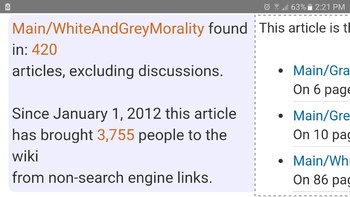 Happy Dank 420 from White-and-Grey Morality.note Don't forget to mention The Heroes while writing examples of this trope. While it's true that the bad guys have redeeming qualities, they're not the only characters in the story and the heroes deserve to be remembered, along with their deeds.

The pinnacle of human art:

Greetings fellow Troper, you can call me KJ for short. I'm plagued with self-aware idiocy and self-loathing. Just to add it for shits and giggles, I'm also an Antinatalist Transhumanist Dragon-Loving Shitposter.

I'm also developing ideas for my own Science Fantasy Monster Hunter-style game called Wyvern Knight, where the Player Character and NPCs are literally anthropomorphic wyverns who take on giant monsters to protect their own kingdom and others from harm, while using whatever resource they find to contribute to scientific knowledge for good purposes. 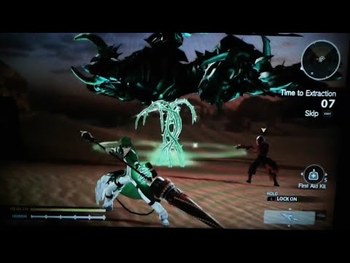 When I'm not working on some pages, then I'm playing either of these games, hanging out on the Forum Games, or at least tweaking up this page. If any Troper happens to play these obscure games, I'm open for some Co-Op Multiplayer. 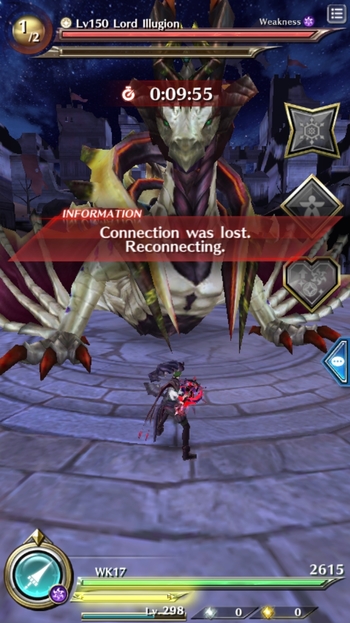 My Hunter where I'm facing off an Illugion from Dragon Project: Connection Was Lost. Reconnecting. note Here's a secret link

to one of my friend's solo on the game's Boss Rush event, complete with NieR: Automata's OST. For those who missed my DP X Aggretsuko Crossover "fanart", here's a convenient link for that

from another friend of mine, except he's running a full party against The Tower.note Another Tower run; this time with Water Oracle Dual Blades 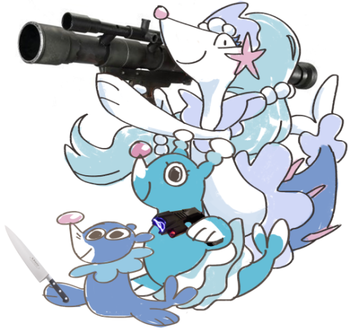 Popplio Family deploying hidden weapons in precise unison. Appropriate response: OH GOD OH FUCK!
Work pages that I'm planning to launch, along with pages that I've launched so far:note You guys can launch the works in red if you like to, since I'm a lazy fuck.

Tropes That Apply To Me:
note This has placed some watchers of the popular culture in a bit of a conundrum. It's clear as day that the film isn't meant as an instructional video on becoming a stock market raider, but it's also clear that - to a pretty substantial chunk of the audience - a lot of what Belfort and company get up to looks like a lot of fun. Immoral fun, maybe. Fun you pay for later, definitely - but fun all the same. Which means that Wolf is probably destined to join Scarface and Fight Club in the pantheon of what I sometimes call "Douchebag Classics," films that draw fiercely devoted fanbases that worship the message and/or lifestyle of a central character while somehow missing that the film in question is meant to be cautionary, not aspirational.

note It's the uncomfortable grey area of making (or discussing) art that depicts evil, or even simply poor decision making: It may be true that no remotely rational person has ever been "made" to do wrong by a movie, but it's also true that no matter how demonstrably rotten a certain character is, someone is going to look at them and think "Actually, I'm pretty down with that." Sometimes it's understandable: Scarface (both versions) is about depicting a funhouse-mirror corruption of the American Dream and The Immigrant Story, but the basic thrust of Tony Montana's self-made rags-to-riches rise clearly still resonates. Other times it's more baffling: I will never understand how anyone manages to miss that Fight Club is a condemnation (and a pretty heavy-handed one, at that) of everything Tyler Durden says or claims to stand for.

note Wolf of Wall Street, on the other hand, faces a slightly different problem: It's an honest movie, and the honest truth is that for the most part all of this debauchery and hedonism do look pretty damn appealing - if this stuff wasn't fun to do, they wouldn't have risked (and spent!) what they did in order to do it. These guys and their world are too shallow to contain Tony Montana's neurosis and too "soft" for Tyler Durden's masochism, their vices (cool cars, expensive toys, walking Barbie dolls for trophy wives, etc) are as boyish as their haircuts. They're would-be Warriors of Capitalism who probably identify more with Scrooge McDuck than Ayn Rand (mostly because it's more likely that they've heard of Scrooge McDuck.)

note And if you're going to make a movie about these guys and their exploits, you're not being honest if you don't allow that truth to be part of your movie: Fast cars are fun. Boats are fun. Getting away with stuff you shouldn't? FUN. Beautiful women? Duh. Drunken, drug-fueled mayh... eh, you get the picture. It was probably a lot of fun to be Jordan Belfort, and as such no matter how plain the film makes the facts of his villainy there will probably be an annoyingly large number of Bros who decide that Wolf would make for great lifestyle training. Ironically, Belfort's lupine nickname came from a "hit piece" magazine interview that infuriated him... right up until he found out that it had made his firm the number one ticket in town for young go-getters seeking quick riches.

note This sort of thing is unavoidable, but being honest about bad guys occasionally having intimately relatable reasons for what they do doesn't make this or any other film "aspirational." There will be a large class of idiots who decide that this is their "favorite" movie for entirely the wrong reason - it would be a shame to hold that against the movie, or its makers. 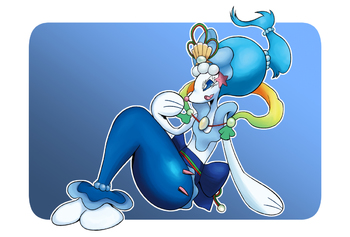