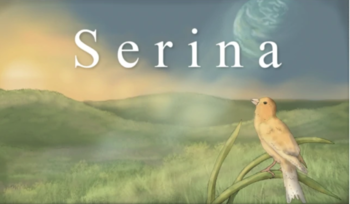 Welcome to the world of birds.
Imagine, if you will, a hypothetical world much like our own, but populated only by a very small sampling of creatures, which were then allowed to evolve entirely on their own for hundreds of millions of years until their ancestors resembled them barely at all.
-Introduction
Advertisement:

Serina: A Natural History of the World of Birds

. It follows the evolution of life on a fictional moon, terraformed to Earth-like conditions, over 250 million years. All of said life descends from a sampling of small Earth species. The largest plants are bamboo and sunflowers. There are insects, but none that pollinate. The only vertebrate species can all be found in a pet store and none are bigger than a human hand. Six species of small, live-bearing fish populate the waters, and the only tetrapod is the moon's and project's namesake: Serinus canaria, the domestic canary. As generations pass and natural selection takes hold, these humble colonists spiral into a myriad of forms familiar and alien.

The project was put on hiatus by the creator due to lack of interest from June to November 2020, though updates are present again as of this writing.

Compare Snaiad, Spec World, Amphiterra, and Hamster's Paradise, the latter of which was directly inspired by this project.