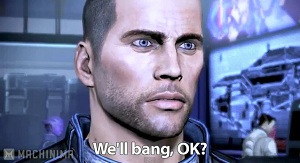 Gamer Poop is a comedic Machinima series by MANS1AY3R

which consists of editing video and audio from various video games to create humorous scenes loosely based in and around the games he enjoys. So far the following games have been Gamer Pooped:

"It looks something like this..."
"I like your aaaassss!" "YOU'RE LYING MORGAN!"
"I'll have you know there's no PUSIEEEEEEE"
"Let's get to bashing butts, as well as DEEZ NUTS"
"I'm Jarl Balgruuf. And I be BALLIN'. SWAG"
"Report to the ship as soon as possible. We'll bang, OK?"
"I'm looking for the bitches of Crookback Bog" "You looks like a b!tch yourself!"
"Hahahaha. Women... Girls... BACK to our kitchens."