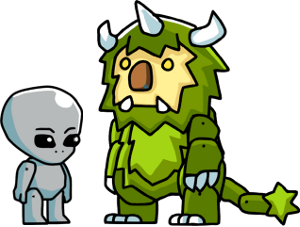 They look all the same to me. Charge the main cannon!
"He got an e-mail from his brother that said that aliens and monsters were attacking his place!"
— Half-Life: Full Life Consequences

The integral part of the Monster of the Week episode. They are strange, scary, and expendable. Some are different than what you'd expect them to be.

Of course, we can have alien protagonists and monstrous supporting characters; but the difference here is that, within the ethics of the shows that use them, it's okay to kill the specific threat-of-the-week version (which is usually a distinct species.) There is no need to deal with complicated intricacies of interstellar diplomacy to negotiate with aliens, consider ethics of advancing mankind via genetic engineering when dealing with mutants, and listen to a vampire's tragic past to understand him better. This time, there are no long term negative consequences to deal with either using what humanity does best.

In short, this trope is for a specific example of Black-and-White Morality when a non-human antagonist (and, likely, his entire species) is Always Chaotic Evil with a shallow, handwaved, or Played for Laughs justification. Different from Aliens Are Bastards, in which the reasons for hostility can be elaborate and well-explained, and often the subject of much debate and comparison to conflicts among humans.

Not to be confused with the DreamWorks movie Monsters vs. Aliens.