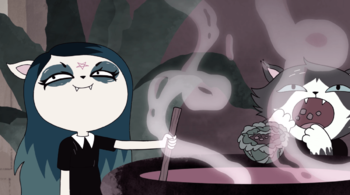 ”The dirt will cleanse me!”
"I...want...to...dieeee..~"
—Claire, after inadvertently eating dandruff flakes.
Advertisement:

The Summoning is an animated short created by Elyse Castro and distributed by Frederator Studios' "Cartoon Hangover" outlet, as part of the "Go! Cartoons" joint venture with Sony Pictures Animation. It started out as a series of comics. The series follows Claire, a young catnote originally intended to be a wood elf, but her appearance led to fans considering her to be a Cat Girl, and Castro later officially labelled her as one witch who lives with her pet cat, Edgar. She’s constantly trying to summon new entities, but it doesn’t always work out the way she wants it to, usually due to missing a key ingredient. The aesthetic of the series is oftentimes compared favorably to Adventure Time and Chowder, or mid-2000s Cartoon Network animated series in general. As of now, there’s only one episode of the animated adaptation, but Elyse Castro has confirmed that she is attempting to pitch a full series.

The Summoning provides examples of:

Edgar finds out just WHAT he had been eating this whole time.

Edgar finds out just WHAT he had been eating this whole time.