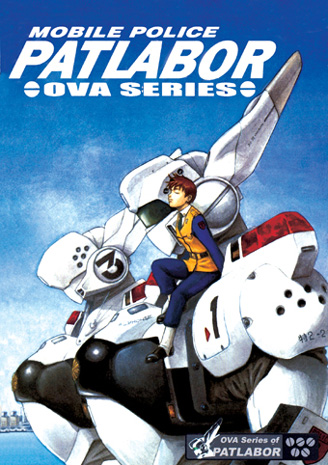 It's such a clear day you can see Mount Fujinote That's NOT Mount Fuji..
"Labor: The common name for robots designed for heavy industrial use. The rise of labors sparked a revolution in construction and civil engineering, but labor-related crime skyrocketed as well. To combat this new threat, the Tokyo Metropolitan Police created a patrol labor unit, the Special Vehicles Unit Second Section. This was the origin of Patlabor."
— Tagline used in the Early Days OVA
Advertisement:

In the Criminal Justice System, Humongous Mecha-based offenses are considered especially heinous. In Tokyo, the dedicated officers who deal with these vicious felonies are an elite squad known as the Special Vehicles Unit. These are their stories.

Set in the not-so-far-off future of 1998, this late-80s/early-90s anime, Mobile Police Patlabornote pronounced pat-lay-ber (Patrol labor), not pat-lah-BOOR, is the story of police officers fighting crime with giant robots. The Special Vehicles Unit's Division 1 are a corps of competent, hard-working police who always get their man — but Patlabor isn't about them. No, it's Division 2 that gets the spotlight, that scruffy, rag-tag band of half-competent cops with a propensity towards massive property damage.

Quite possibly the quintessential 20 Minutes into the Future giant robot anime, Patlabor is notable for treating its mecha not as insanely powerful miracle machines, but actual vehicles with clear limitations that require constant maintenance. In fact, although there's action aplenty, most of the series focuses on the daily life of the police officers who pilot the mecha, and big robot smash-ups often take up only a minute or two, if that. It is, truth be told, a Slice of Life series disguised as a Humongous Mecha show.

Patlabor was created in 1988 by "Headgear" — a group of creators including Mamoru Oshii (who pretty much kickstarted the OVA boom of the 80s and would later earn international recogition with Ghost in the Shell), Masami Yuuki (of Birdy the Mighty fame), Akemi Takada (character designer of Urusei Yatsura, Maison Ikkoku, Kimagure Orange Road) and others. Patlabor was planned from the start as both a manga and OVA, and a theatrical movie and ongoing TV series followed not long after. By turns a Cop Show, Police Procedural, slice of life comedy, political thriller, and of course, a Mecha Show, Patlabor had no trouble switching between genres from one episode to the next. (For the most part, though, the TV series and OVAs tended more towards comedy and light drama, whereas the movies were much more adult and sophisticated.)

Patlabor was unique for its time in that it examined the impact that giant robots might have on society. Not war machines but glorified forklifts, hijacked labors (hence the name) provided a new avenue for crime and terror, thus the need for a police organization trained to deal with them. Otherwise, the Japan seen in the series was virtually identical to the Japan of today, just with slightly more advanced tech. On the Sliding Scale of Idealism Versus Cynicism, it fell somewhere in the middle — it wasn't some wonderful new age of technological miracles, yet the tone was still generally hopeful and optimistic. (However, the tone of the movies, most notable in the third and final film, is decidedly more cynical and pessimistic, almost a denouncement of the original premise.)

Most of the narrative focuses on Officer Noa Izumi, an eager, fresh-faced, tomboyish young woman who's just graduated from cadet training. Noa's a mecha otaku — the only reason she applied for the job was so she could ride around all day in her own personal robot (nicknamed "Alphonse"). One of the main themes of the series is Noa learning to take her job as an enforcer of the law more seriously.

Although very popular over in Japan, Patlabor never really took off in North America, although it has a cult following among anime fans. The first two movies were dubbed by Manga Entertainment in the mid-90s, and released to VHS and DVD in English-speaking countries around the world, but the OVA and TV series weren't imported and dubbed by Central Park Media until more than a decade after they ended their Japanese run. In addition, Pioneer released the third movie, Bandai Visual re-released the first two movies with new dubs, and recently, Maiden Japan (sister company of Sentai Filmworks) has licensed the franchise and is currently re-releasing it to remastered DVD and Blu-ray. Surprisingly, the only part of the anime franchise that hasn't been dubbed in English is the last 12 episodes of the "New Files" sequel series. As for the manga, only the first two volumes were released in the U.S. and Canada. For French-speaking areas, only 18 out of 22 volumes were released. As of 2018, the TV Series, OVA series and first three movies are available on HIDive

Watch Mobile Suit Gundam, Armored Trooper VOTOMS, or Super Dimension Fortress Macross if you are interested in more Real Robot Genre shows. Compare with the Mazinger trilogy, Getter Robo, Voltes V and Daimos to have an idea of what the Super Robot Genre is about. Contrast with GunBuster or Space Runaway Ideon to see what the opposite end of the scale is.

not a reboot, of the series. Known as The Next Generation -Patlabor-, thirteen episodes were shown in theaters in seven parts, and a feature-length film aired in spring 2015.

A 10 minute animated short called Patlabor Reboot aired on October 15, 2016 as an extra short for the Japan Animator Expo. It's released on DVD and Blu-Ray in Japan, although it has been officially streamed on its website in Japanese with official English subs.

Several mecha from the franchise, such as the AV-98 Ingram, Type-5G/1C Grau-Bear and the CRL-98 Pyro-Buster, showed up in the 2017 Survival Horror game City Shrouded in Shadow.

"This page is about a work of fiction... but in ten years, who knows?"

Example of:
Losing a Shoe in the Struggle