Web Video / Backstroke of the West 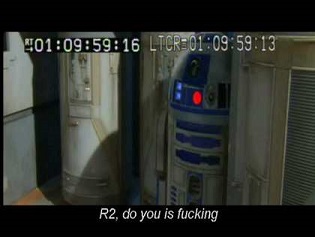 A line have beened [sic] distorted by the Dark World.
The war came!
The republic encountered
Two squares fight the vehemence
The improbity fills the world
The space general of the alliance is skillful
Kidnap the D the speaker the conduct
The proper abruption alliance troops tries
Ratio prosperous drive with the
Advertisement:

Star War the Third Gathers: The Backstroke of the West is a Gag Dub of Star Wars Episode III: Revenge of the Sith. It can be seen here

. The name is taken from the translation of the opening crawl, the original being, obviously, "Star Wars: Episode III: Revenge of the Sith". Most sentences are absolutely mangled in the translation, although some sentences still have their original meanings intact. It was later turned into a Gag Dub by theYoutube channel TheThirdGathers.

with clips posted beginning in 2010. The movie has been taken down in late 2021, archived here

. In August 2021, work began on dubbing the only other known authentic full movie script, presumably found in China, Napoleon's Explosive (the mistranslation of Napoleon Dynamite,) byTheThirdGathers.

and featuring some of the vocal actors who dubbed The Backstroke of the West.

Similar Recursive Translations have been made of the other movies in the series, collectively known as The Star War Gatherings, with a fandub

of The Fourth Gathers: The Novelty Desirenote Episode Four: A New Hope and The Fifth Gathers: The Counterattack Collectionnote Episode Five: The Empire Strikes Back both completed. Since the announcement of the Star War Gatherings production, Backstroke of the West has retroactively been applied to the former's lineup. In fact, though the dub projects are largely unrelated, 3 of the Backstroke dub vocal actors have even reprised their characters.

There is war in the Gram Republic with the Space. Speaker D, the Speaker/Prime Minister of the Senate, has been kidnapped by the Abruption Doctrine leader. Two Hopeless Situation Warriorsnote The official sound based translation of Jedi is 絕地, which just happens to translate to "desperate/hopeless place/situation". Thus, Hopeless Situation warriors, Ratio Tile and Allah Gold, are sent to rescue him from the clutches of Space General, a very deceitful former Hopeless Situation Warrior. Previously, Allah Gold made an unspecified mistake which started the war, and is determined to do whatever it takes to restore peace. However, it is unclear whether he wants the war to continue or not.

The rescue is a success. Allah Gold duels and kills The, a "big" who is into human sacrifice and harbors an intense hatred for him. Space General, who can always succeed to succeed, manages to escape, and his airship sustains critical damage from the mysterious Good Elephant. Fortunately, our heroes manage to crash-land the airship safely on Lemon Avenue, though The Willing to Compares is annoyed that nobody is there to greet them. After his harrowing experience, The D expresses concern about whether the war will continue, but Text How Big, a powerful black Hopeless Situation Master, rebuffs him, on the grounds that he is against compromising with black people.

As Space General proceeds with his plan to split up the Abruption Doctrine leaders, the Presbyterian Church grows to distrust The D, apparently because he is from the West. When D the Superior appoints Line to the Parliament as an Elder, the Parliament callously deny him that title in retribution for his record of "long peace." However, they accept his appointment to the Parliament on the condition that he spy on the Prime Minister . . . so that they can learn more about his sex life in order to discredit him.

Meanwhile, the Presbyterian Church continues on its task to find Space General, believing that he is the only thing that is keeping the war going on. A tip from Speaker D points the Hopeless Situation Warriors to Particularly With The System Of. Speaker vouches for Allah Gold to lead the campaign. Unfortunately, despite even Vanquish Is stating Gold's experience, the Card Ratio or Ratio Tile is instead sent to kill Space General, with Vanquish Is being outvoted and suddenly concurring with the Presbyterian Church's decision. Believing that everybody is good, Section Ratio General decides to confront Space General directly, but he is proven wrong when Space General orders his underlings to killed him. However, before the minions comply, Space General decides to duel Section Ratio General himself, confessing quite nonchalantly about being a former Hopeless Situation Warrior. Eventually, Space General is defeated, though he managed earlier to complete his plan to split up the Abruption Doctrine leaders.

The Presbyterian Church's brilliant plan to discredit the Speaker backfires, as, while the Space General was defeated, The D has become disillusioned with the Hopeless Situation Presbyterian's plan to create "less freedom with more wars." Determined to end the conflict at all costs, Mr. Speaker seduces Gold into having an affair with him, turns him against Hero's Ground, and ultimately reveals that, as Governor of the city, he has learned to use a dark power, the Black Influence, which can make a person become not just a big, but both strong and big. This is the last straw for Text How Big, who deems Allah Gold "foolish" and decides to kill the Pudding outright. The Peaceful is Willing To must make a fateful decision, which will ultimately pit him against his depraved and foul-mouthed teacher, Section Ratio General . . .

TV Tropeseses, the Wish Power are together with you.