Blade on a Stick 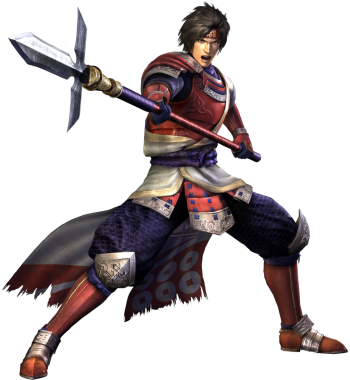 "Another has fallen to my spear!"
"Till, bruised and bitten to the bone
And taught by pain and fear,
He learned to deal the far-off stone,
And poke the long, safe spear."
— Rudyard Kipling, "The Benefactors"
Advertisement:

A polearm — such as a poleaxe, spear, naginata, or any other weapon that's a long stick with something sharp and metal on one end—is often the province of hapless Mooks: city guardsman, honor guard, angry natives, and so on. Anyone who needs something long to cross over a portal to prevent someone from entering will use a polearm. When not in the hands of mooks, they are used to characterize calm and collected individuals, the Lady of War, or The Lancer (in most cases).

Polearms are extremely effective weapons, being among humanity's first inventions. The polearm has killed more people in the history of battle than any other weapon (although explosives are rapidly catching up), and are arguably the easiest one to wield for beginners. They are highly suitable for massed battles, much more so than the sword. This is due to their reach—an advantage either on horseback or on foot, as well as one which makes it possible for multiple ranks or files in formation to offend the enemy at the same time—and the fact that they're more effective at penetrating armor. In medieval combat, the sword was more like a sidearm, while the polearmnote Or axe, but generally the axe was long enough to count as a polearm anyway was used as the main infantry weapon on the battlefield (similar to how modern soldiers use a pistol as a sidearm, but generally some kind of automatic rifle as their primary weapon). The reason you may not have heard of the importance of polearms is that our cultural obsession with swords is at least a thousand years old.

This may be caused by the fact polearms are often Boring, but Practical. Many longer spears — and especially the pike — are not terribly suited for single combat or individual feats of heroism. A long, heavy shaft can be cumbersome, and a thrust can only threaten one opponent at a time, so a pikeman outside of formation is in danger of being outflanked. The stereotype of a polearm being the weapon of choice for stoic, collected individuals such as guardsmen likely comes from the discipline required to maintain formation in face of the apparent overwhelming odds.

In older or more primitive settings, early spears with tips made out of stone, bone, or obsidian will likely be seen in the hands of the Noble Savage. Due to the nature of these settings (where swords haven't yet been invented), the character wielding the spear is much more likely to be The Hero than a mook or supporting character. Primitive shortspears, such as the African Iklwa, evoke similar imagery as swords for the time period, and thus are often wielded in a similar way by The Hero.

When a hero uses a polearm, he'll generally wield it "open-fashion", swinging it around almost like a staff. Glaives and halberds — and even the Chinese spear ("Qiang" in Chinese), with its leaf- or dagger-like blade — are well-suited to it, but all of these are "individualistic" weapons, requiring a lot of space to be employed effectively and needing a lot of conditioning and experience on their wielder's part. Ordinary spears, and pikes as well, are better used in close formations, and can be used well by poorly-trained troops provided they don't break and run, and in the hands of skilled and disciplined troops, make a formation almost unbreakable in a head-on fight.

Spears may also be thrown, even if the weapon in question isn't exactly built for it unless magic is involved, but if this is their primary use, you're more of a Javelin Thrower. The lances of the Dark Ages were designed to be flung as well as couched, and one occasionally hears of lances being thrown as late as the 16th century. Javelins are light spears specifically designed for throwing — which are not very useful at all in hand-to-hand fighting.

Polearms are often preferred by a Lady of War, especially in Japanese media; the naginata

was traditionally the weapon of a Yamato Nadeshiko while her samurai husband was away, giving it a "feminine" mystique; this was further amplified by several of those "housewives" becoming nigh-mythical warrior figures

themselves. A House Wife in the west is more likely to be shown using a Frying Pan of Doom.

A really successful spear attack — perhaps as a Finishing Move — may leave the victim Impaled with Extreme Prejudice.

A weapon whose use is Truth in Television and truly Older Than Dirt as elaborated on in the Real Life folder, being probably not too far behind in use to humanity first picking up things off the ground to defend themselvesnote Archeologists are starting to think, based on evidence, that spears appeared as weapons before clubs did. - even in the age of guns, the weapon's concept lives on as the bayonet which is still taught to modern armies, even if only as a training aid for symbolizing and evoking aggression for new recruits with little expectation to actually use it in combat.

They don't call Xaldin "The Whirlwind Lancer" for nothing.

They don't call Xaldin "The Whirlwind Lancer" for nothing.