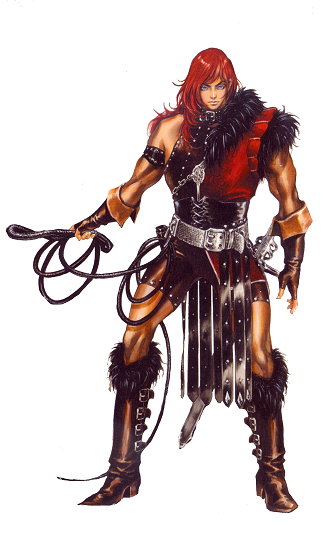 Crack that whip!
"When a problem comes along,
You must whip it!"
— Devo, "Whip It"
Advertisement:

A bullwhip's signature cracking noise is a miniature sonic boom. It's about as close to the Stuff Blowing Up type of coolness as you can get without infringing upon Fantasy Gun Control. A whip is also, basically, more or less a long piece of leather rope, and we all know how sexy leather is, right? In video games, action adventure and fantasy tales, some characters will show how extra badass they are by using a bullwhip or other flexible weapon as their primary armament, as well as employing it for a Building Swing.

This is also a preferred weapon of the Repulsive Ringmaster, thanks to the fact that ringmasters in the olden days were in charge of the equestrian acts. It's also a favored weapon of slavers, slave-owners and torturers alike, owing to their historical use in slavery, torture and punishment. More neutrally, it'll also show up as a commander's weapon in more stylised historical works - whips are a traditional symbol of authority that multiple cultures have issued to military officers, and while they're usually harmless ceremonial items, that doesn't stop a work of fiction from making them much deadlier.

This, of course, ignores the fact that whips are generally impractical weapons in close combat, unless you like the idea of flicking your own ear every time you crack that whip. In light of this, most whips will be weaponized by adding blades or spikes, making them out of chain links, being electrified or just magic in order to be a more convincing weapon, while maintaining the cool sexiness. Also, they're often employed to instantly tie up an enemy, despite being designed to avoid tangling. Less enthusiastic authors settle upon emphasizing disarming, tripping and choking attacks.

See also: Weapon of Choice and Variable-Length Chain. Riding crops are a variation. Want to badass it up a bit? Try using a Snake Whip or a Whip Sword, or electrify it for a Lightning Lash.

Sister tropes: A Taste of the Lash, Don't Make Me Take My Belt Off!, Chain Pain.