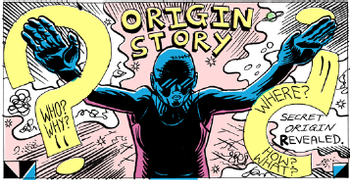 "What? You want to know my secret origins? Well... maybe another time..."
— Linkara
Advertisement:

When you are writing a work of fiction you often want the audience to know how a particular character came to be. Often this is achieved in the first episodes or issues, but almost as often, for whatever reason, this can't happen. Perhaps the character was originally meant to be mysterious, a figure robed in secrets and mystique, and now their past has emerged. Alternatively the writers might not have had an origin laid out for them, perhaps due to the fact that they were meant as a minor character and gained a fanbase or were simply a Monster of the Week that happened to come back once or twice. Or it could be that the thing without the background is more than just a character; perhaps the entire universe has a history that the author wants to get across, and there is no way of doing that at the same time that a first episode finds its audience.

An origins episode is an episode, issue, chapter, or a multi-part story arc that exists primarily to examine the origin of a character or setting after the work has been going for a while. Many prequels qualify, but not all. Likewise whilst many things have had extended flashbacks it does not necessarily count. However the episode or issue need not be all set in the universe's past to qualify, so long as exploring that past is the point. Done well, these works help build the universe's mythos and continuity; done badly, they just feel like the author trying to show how clever they are. Worse still are the origins episodes where the writer does not bother to check their own continuity and creates a mess of plot holes and poor characterization.

Often takes the form of a Whole Episode Flashback or Flashback B-Plot. Compare with a Pilot Episode, which usually sets up the origins of the main characters and setting in the first episode. Television characters can have an Origin Episode of sorts if they receive A Day in the Limelight or a Lower-Deck Episode. See also Start of Darkness, for when the Origin Story shows the rise of a villain. See also No Origin Stories Allowed, which is when the creator(s) ban this from happening.

This episode details where the Mystery Shack came from, And how Stan came to be in charge of it

This episode details where the Mystery Shack came from, And how Stan came to be in charge of it